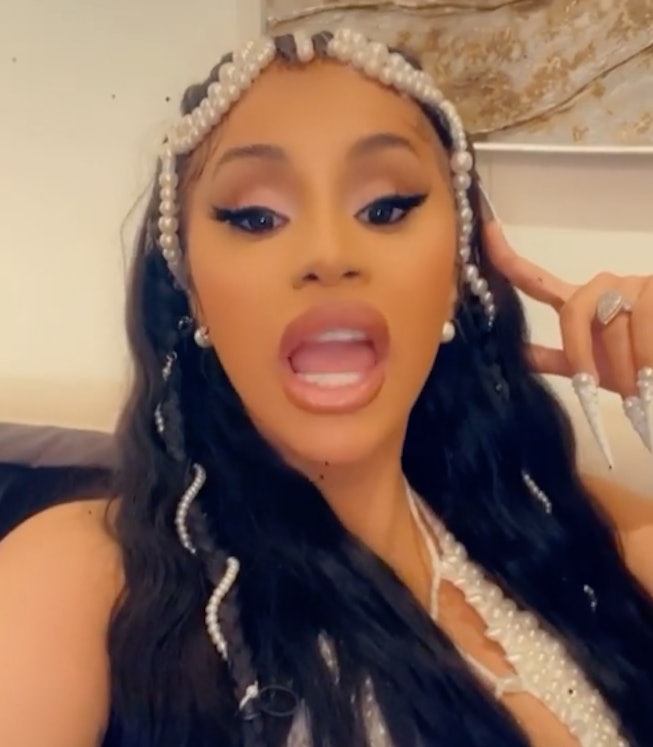 The first of three (yes, three!) presidential debates was pure incoherent mayhem. President Trump refused to condemn white supremacist and militia groups, while Democratic candidate Joe Biden said he doesn't support the Green New Deal. Along with constant crosstalk and name-calling, Trump also pulled a Mariah Carey-level "I don't know her" about Biden's deceased son, Beau, while invoking the specter of Hunter Biden's alleged history with cocaine. Chaos all around!

Thankfully, Cardi B was on the case to help make sense of the troubling situation. The rapper put on her pundit hat, recording various bits of the debate to fact check outrageous claims, yell in anguish over the reality of the United States, and give her two cents on the entire evening.

"People from Joe's team, I'm letting y'all know right now, tell Joe to get aggressive," she said at the start of the evening, essentially predicting the garbled communication. "Don't let this man pick on you. He just wants to do a show. So give him a show...you better get spicy!"

Cardi got heated when Trump went after Biden's intelligence. "I’m getting hot.....TAG ME IN," she wrote. After correcting Trump's claims that he inherited a broken economy, Cardi was not pleased with the president's attack on Hunter. She empathized with Biden's son, and compared his alleged drug addiction to the plight of millions of Americans who turn to illicit substances out of despair.

"You can imagine what time of pain and what type of shit his son had to turn to for comfort. Just like a lot of Americans in this country, they turn to bullshit for comfort. For Trump to say that, that was such a low blow, especially to people who have to turn to drugs for comforting," she said earnestly, complete with an Instagram anime filter.

"A lot of his fucking supporters turn to that shit as well. That was so unnecessary and gross," she continued. "I wish that fucking Joe Biden would have spoken to me before the debate because I would have told him he better roast his ass. And I have mad jokes under my belt." Fingers crossed that Team Joe calls up a certain Bronx rapper in preparation for the next debate.

NEXT UP
Entertainment
YDE On Her EP, Lady Gaga & Making New Short Film 'Send Help’
Entertainment
Getting Ready With Pale Waves For Their 2022 New York City Concert
Entertainment
Who Will Rihanna Bring To The Super Bowl?
Entertainment
Rina Sawayama's "Happier Than Ever" Cover Is A Must-Listen