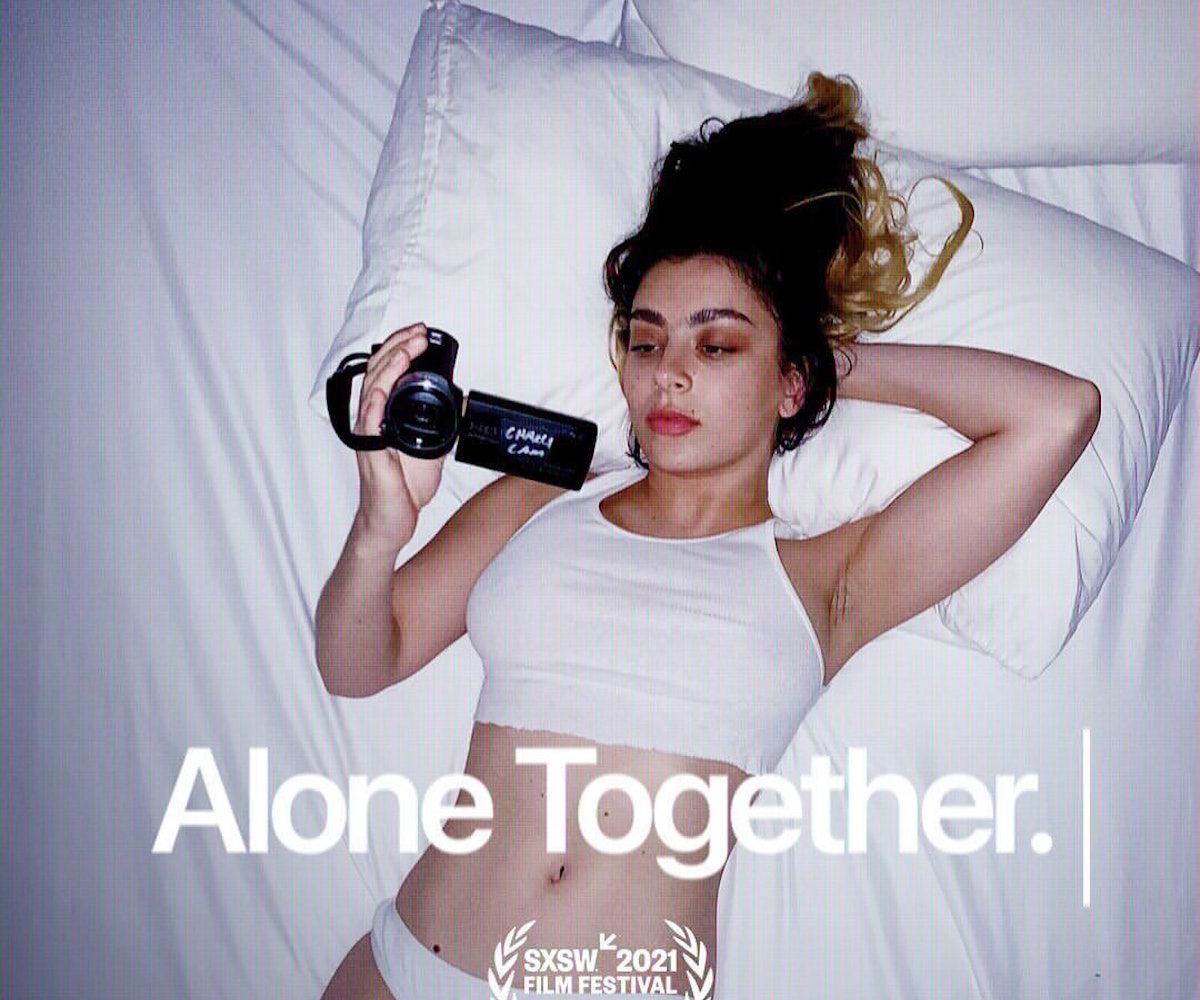 Charli XCX made how i’m feeling now in five weeks during April and May 2020 in early lockdown. Created with the help of her fans, the album is an intimate account of loneliness and a celebration of the love she shares with her boyfriend, Huck Kwong. In a new mixed-media documentary that premiered Thursday at SXSW, the princess of hyperpop takes us behind the scenes of the making of the album, and along the way shows us how her vulnerability is her secret weapon.

Alone Together blends camcorder footage that Charli, her managers, and boyfriend filmed at her house in Los Angeles, along with content she’s posted on social media, recordings from Angels (her fans), and DeviantArt-style animations of nymphs bopping to her first hit single “Boom Clap.” We’re introduced to Charli XCX on tour in 2019, when the now-28-year-old “finally felt in control of every aspect of her career.” She’d been making music since age 14, first on MySpace and eventually writing for acts like Icona Pop and Iggy Azalea, but was only recently adopted by a strong queer audience “whose confidence inspired her own confidence.” Directors Bradley & Pablo — the duo behind the music videos for Harry Styles’ “Watermelon Sugar” and Lil Nas X’s “Rodeo” — expertly balance the artist IRL with glitchy digital ephemera.

At first, in those first two weeks of quarantine, Charli does fitness videos and bakes banana bread like the rest of us as she takes advantage of her vacation from responsibility. Her boyfriend of seven years, Kwong, moves in with her for the first time; previously, the longest consecutive period they’d been together was 11 days. But soon, the party-loving and self-proclaimed workaholic singer is feeling stagnant.

On April 6, eighteen days into lockdown, she announces over Zoom that she would be writing, recording, producing, and art-directing a brand new album with a hard release date of May 15. She says she’s probably going to write a lot about Kwong and their relationship. (Later in the film, his reluctance to do things like make out in a green-screen suit is hilariously apparent). Not only that, she’ll be offering herself up to real-time scrutiny on social media as she invites her Angels to sound off on potential how i’m feeling now art and lyrics. In hindsight, she took on some of their grief, too, and gave them something to look forward to during days that blend together.

The film introduces Ronald, a fan from Mexico who feels misunderstood by everyone around him. He throws a virtual party of DJ sets and remixes, a joyous jumble of queens and teens under Philips Hue lights, that Charli attends by surprise. Posion Oakland is an out of work drag performer longing for the club. Cole is an Alabama high school senior worried college won’t open in the fall. All three become Charli’s collaborators. In total, Angels contributed over 5,000 music video clips, 2,000 cover artworks, and 3,000 remixes to the how i’m feeling project, the documentary reveals. They created a world to be online, alone, together.

It was a radical endeavor to let them — and now us — in on her process. We watch as she makes guttural noises into mics she just bought online, and highlights sections of a multi-track in Logic, her editing software. Usually in a hoodie, she looks tired (like she definitely knows that under-eye bags are in, and she’s cashing in on the trend.) “Sometimes I do feel it’s good to look cute if you want to sound cute,” she tells the Sony camcorder while pulling on light-wash mom jeans. “But most of the time” — she super zooms on her face in the mirror — “I kinda just look like trash.” So this is how you make a banger.

Alone Together aims to break down the boundary between Charli XCX the star and Charlotte Emma Aitchison, the woman. In the doc, we hear both a voice memo posted to her Instagram Story where she says she hates herself, and the aftermath of her mother FaceTiming to make sure she’s okay.

They created a world to be online, alone, together.

Still, there’s layers of truth and artifice in the 70-minute documentary. Her Instagram before April 6, 2020 is wiped clean. Her decision or a manager’s? At one point, Charli asks Kwong what the worst thing about her is and he says to the camera, blurred because it’s too close up, “When you’re not enjoying yourself… You’re a workaholic.” Even in that moment of supposed intimacy, one can’t forget the fact that she’s working.

If you are a devoted Angel, Alone Together won’t be anything new. You’d have been at the listening party for the remix of “Click” and watched her on Instagram Live, a tissue balled up in her fist, her cheeks wet from crying: “Guys, I feel so anxious right now.” For those uninitiated to Charli and the PC Music legion, the documentary is a genuinely lo-fi portrait of a pop star in quarantine.

Alone Together ends with her Club Quarantine release party, but Charli doesn’t leave the mourning in 2020; On-screen text reminds us that the COVID-19 pandemic is still ongoing. In January, after the world received news that SOPHIE had fallen to her death from a balcony in Athens while trying to get a good look at the full moon, I couldn’t stop thinking about what Charli might’ve been feeling. Now, I have a better idea of her interiority.