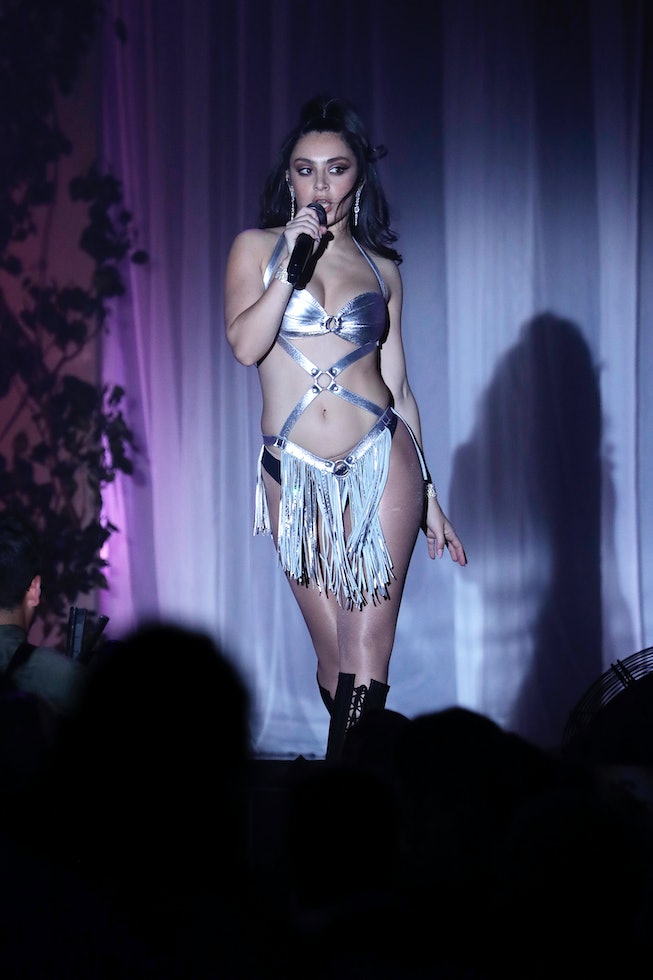 Whether you like it or not, the Metaverse is here to stay. Since March 2020, much has been speculated about what the next frontier of live virtual music experiences and concerts would look like. Would VR be involved? Holograms? Both? Well, it looks like the future is finally here. Every few months, it seems a new artist announces a virtual concert or fan meeting — and the latest to jump headfirst into the new world is Charli XCX, set to perform her first-ever Metaverse concert inside Samsung Superstar Galaxy on Roblox on June 17.

This won’t be the “Lock It” star’s first fling with the virtual arena. Back in April 2020, a Minecraft avatar of the singer descended into the popular world-building game as part of a massive digital music festival called Square Garden, where she played alongside 100 gecs, Benny Blanco, Cashmere Cat, and others. This time around, things will be a bit different, as she’ll be headlining the performance alone, and preparation for the show was much more involved, necessitating her using motion capture suits for the first time, and reviving old, discarded album ideas. Fans will also play a larger role in the event, as select participants will be chosen to dance with the star (virtually) on stage.

As the industry flies full-steam ahead in utilizing the burgeoning Metaverse, there’s the inevitable question of how the virtual world will shape the experience of fan-and-artist meetups to come. For Charli, there are only pluses that can come out of it. “I think in virtual spaces, anything is possible in terms of where you're performing, or how the performance looks,” she tells NYLON.

Calling from Barcelona after a late night out performing at a PC Music showcase in the city, Charli XCX shared her thoughts about the Metaverse, Roblox, her upcoming virtual concert, and her first time using a motion capture suit.

How did you get involved with Samsung Superstar Galaxy?

I've been working with Samsung for quite a while now on and off over many, many years in lots of different projects. When they approached me about their collaboration with Roblox and the fact that they were building their own game with Roblox, I just felt like it was a really cool opportunity for me to be able to connect with some of my fans all over the world who maybe haven't actually had a chance in real life to come and see me perform. Within this game, they will be able to see me perform my first-ever virtual concert within the Metaverse at Samsung Arena, and it just felt like a really amazing way to connect with people and celebrate people's creativity. I also literally dance with my fans on stage, which I absolutely love doing, as you probably saw last night at the Acid Angel concert.

Do you play Roblox?

It's the ability to be able to connect with people who might not be able to be physically at a real life show or, for example, within the pandemic. I mean, it shows what’s happening, that there was still this need for a sense of community and a kind of space for music to thrive, and I suppose that's what draws me to it. To be able to get my music space, whether that be physical, virtual, it’s for people to enjoy it and be able to access it.

“I do really love live physical music, but I also love the kind of endless possibilities that the Metaverse holds, you know?”

Beyond solving the issue of not being able to see each other in person, is there anything else that you feel like these virtual shows allow you to do that you wouldn't be able to in real life?

There's so much experimentation that can be done with the way things look, the way things move, the interaction with the crowd, and the fact that in Samsung Superstar Galaxy people who have earned enough star power from the stages that they've built inside the game, they have the opportunity to come on stage and dance with me. To be fair, I have done that at IRL shows as well. But it's cool that it's gonna be possible for so many different people from different places to be able to all be dancing on stage together with me. I think in virtual spaces anything is possible in terms of where you're performing, or how the performance looks. The different stages are based off previous stages that I've actually performed on in real life but then also based off of album artwork. Actually based off an album artwork that never came out, which has this stretch helicopter and like huge skyscrapers that I'm standing on top of. It’s cool to bring that world to life in this virtual performance because the album in question actually never came out, so it didn't have its chance to really exist. It's cool that [this is] allowing for that to happen.

The Metaverse has been hailed as the future for concerts and fan experiences. What kind of role do you think it'll have on the live music industry or just the music industry in general?

I think that's a really huge question that maybe I don't have the full knowledge to answer. But I think there are many pros including the kind of inclusivity element, the fact that you can come to a concert no matter where you are. Fan communities are so international, especially my own personal fan community. I know that a lot of my fans, whether they live in the U.K. or Brazil or in Barcelona, or in the Philippines, or wherever, they are all connected and communicating online. And I feel like as a fan it must be really cool to be able to attend a concert with other members of the fan community and experience the same thing at once. I do really love live physical music, but I also love the kind of endless possibilities that the Metaverse holds, you know? I think both are really cool.

Is there anything you're doing to prepare for the show that is out of the ordinary?

Definitely. We previously began working on the show, and the performance elements of the show. As you said, there’s a lot of building that goes on, but we also had to capture a lot of my movement. I did that using a motion capture suit. That was something that I haven't ever done before. So that was really cool to be able to experience that and do that with the Samsung team. I had my little helmet on and lots of different cameras all on me. It was really funny. Like every movement I did has been captured, so it really is me performing and moving exactly how I move.

Are these virtual fan experiences something you are interested in continuing to pursue in the future?

Definitely. What's really cool about this particular collaboration is that, yes, it's reaching my fans but also, Roblox has such a hugely popular and massive game that people outside of my fanbase are also playing and it's cool to be able to connect with new fans and maybe people who aren't as familiar with my music. I'm always down to explore different spaces, whether they're physical or virtual.

NEXT UP
Entertainment
Hunjiya Strives For Better Communication On "Talk2Me!" & "Favorite"
Entertainment
BTS' Break Is A Necessary Step For The Group
Entertainment
NCT Teams Up With Sanrio For Their Next Merch Launch
Fashion
Behind Demi Lovato’s Pop-Punk Outfits In The “Skin of My Teeth” Music Video