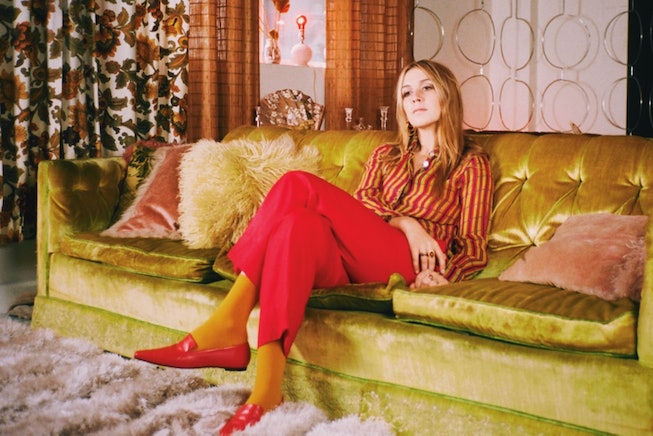 What would it look like if Giovanni Ribisi, actor of Avatar and Ted fame, made a music video? Apparently, a star-studded surreal art film, as is the case for his curious and newly directed visual for bi-coastal multi-hyphanate Chase Cohl.

The poet, model, and musician premieres the music video for her song “Special Situation” on NYLON on Thursday, a cut from her recent EP, Dear Dear: Volume 1. The song is a great play on the sappy, head-over-heels, girl group love songs of the ‘60s, all swaying strings and piano, and painfully desperate lyrics that are painful because we all still feel that way sometimes: “Baby, I’m so lost in my infatuation/ What else can a little girl do,” Cohl coos at one point. At one point the melody goes in a direction that feels like it might seamlessly flow right into The Ronettes’ “Be My Baby,” but it sharply turns left, keeping you on the heels of Cohl’s surreal creation.

"The song is a most literal play on the 1960s girl group theme, that feeling of being so much in love you essentially turn to a puddle,” Cohl writes in an email. “It’s deeply emotional lyrically, theatrical, and so heartfelt. This is the most interesting song to me on the EP, & certainly the most reflective of what’s to come in parts two and three this fall. It only made sense for the video to crack that wide open. I trusted Giovanni entirely."

Just as dreamlike is Ribisi’s video for the song, which stars Cohl as herself trying to film the video but continually getting interrupted by howling screams and groans from her phone, and mysterious mics falling on her head mid-shoot. Luka Sabbat and Duke Nicholson (Jack Nicholson’s actor grandson) make cameos as the “directors” of the shoot, as does Ribisi’s sister, Marissa, who briefly steps in shot to touch up Cohl’s makeup.

"This was a case of being caught between a beginning-middle-end ideal and a hip series of isolated abstractions heaped on an artist’s music; interspersed with them writhing around, performing their song,” Ribisi wrote of the video in an email. “In trying to avoid both, we achieved them plentifully. We’re still looking for the editor."

Watch “Special Situation” below, and if you find yourself desperate to experience a version with no interruptions, Cohl’s also sharing its lyric video as well.

NEXT UP
Entertainment
Mariah Carey, Xtina, Missy Elliott To Play Lovers & Friends Fest 2023
Entertainment
Hawa Has Her D'Angelo Moment In Playful "Actually" Video
Entertainment
Chloe's "Pray It Away" & 9 Other New Songs Out This Week
Entertainment
Harry Styles Is Performing At The 2023 Grammys
Style + Culture, delivered straight to your inbox.