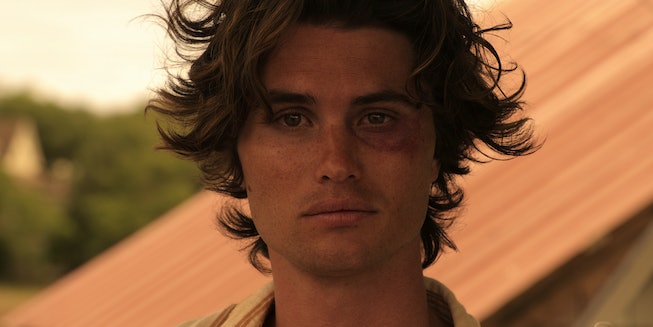 Frothy teen dramas are a sacred genre. Hot teens, villainous adults, steamy romances, and alarmingly high stakes is a tried-and-true formula when it comes to entertainment. Netflix is dipping its giant streaming toe into the water with Outer Banks, its latest drama set on the coastal islands of North Carolina. It’s a bit darker and moodier, more The O.C. with its after hours beach kickbacks and focus on socioeconomic discrepancies than the unhinged silliness of Gossip Girl. There’s even an after hours party on the beach that breaks out into a fight, though no one says, “Welcome to the Outer Banks, bitch!”

Much of the tension in Outer Banks focuses on wealth inequality between two rival surf groups — the working-class Pogues’ spend their days at the will of the monied Kooks with country club-appropriate names like Topper and Rafe. Opposite of these seersucker clad elites is John B, the trouble magnet Pogue and the show’s chiseled and floppy-haired leading man. Played by Chase Stokes, John B propels Outer Banks forward when he finds a mysterious, sunken ship fortune that naturally sets off a domino effect of chaos for himself and his fellow Pogues as the season’s premiere story arc.

Stokes snagged the role in one of those rapid, Hollywood fairytale kind of ways. After initially passing on an audition thinking it was an unnecessary Goonies reboot, Stokes read the pilot and was hooked. He flew to Charleston on a Sunday red eye, and had the role by the following Wednesday. “The day the show aired was exactly one year from when I auditioned for it,” he told NYLON over the phone. Stokes’ come up may have been overshadowed by the COVID-19 pandemic; any in-person interviews, glamorous red carpets, and other spoils of being the resident heartthrob of a Netflix series have been postponed indefinitely, but the 27-year-old is taking it in stride. For now, he’s in Los Angeles with a classic quarantine itinerary: cooking, drinking, and rewatching Jersey Shore.

The following interview contains spoilers for season one of Outer Banks.

Outer Banks asks a lot from you. You’re not only the lead, but you’re narrating each episode. How was that?

It was a lot. I was a little aware when we started, but truthfully, I don’t think there was ever a way to prepare for the load that I took on. I’m big on challenges throughout life, so this one for me was sort of like another box to check off crazy daunting tasks that I wanted to not just do, but do justice to. I think so often in the Y.A. world, sometimes it can feel a little bit inauthentic. I just wanted to make sure that when I’m narrating or driving a boat or getting thrown off of a boat or getting shot at, that it came to life in the dialogue and in the relationships and the action sequences.

Speaking of action sequences, this show is physical as hell. You’re running everywhere, you’re surfing, you’re fighting. Did you have to train in preparation?

I’m pretty active, I’ve played sports my whole life. I played ice hockey really competitively before I dove into the world of entertainment. It all happened really fast, so I wasn’t particularly training for it. But as time progressed, I was very much involved with our stunt coordinators, as well as Jonas who is the director and creator of the show, on making sure everything came to life in the ways that it did.

I did try to do a lot of my own stunts, but I had amazing stunt doubles throughout the course of the show. I had Daniel Hargrave who has doubled as Chris Evans in Captain America and then we had kind of a newcomer, his name was Cole. Some of the stuff, like when Ward and I are fighting and he throws me over the edge, that was actually Cole. It’s cool, you get to kind of have a younger guy who’s looking for his break like how I did in my situation with Outer Banks, as well as have someone who’s super established like Daniel who’s doubled somebody as iconic as Captain America.

What was the most challenging scene to film?

God, there were a few, but I think the most challenging one in particular was the final sequence at the end of the season ,where Sarah and John are on the boat and the wind is whipping them and the rain is picking up. We shot that on a boat all through the night for three nights. We had these crazy fans blowing 50 mph winds at us, water canons and hoses spraying water, and jet skis all around us making waves. We filmed it where they bring barges in the ocean to do maintenance on them, we had the boat tied off in there. It was rough because obviously you’re trying to focus on your performance but you have water, light, water dumped all over your face. I couldn’t see, the water was just ripping my eyeballs apart.

Acting seems hard enough as it is without the elements beating your ass.

You mentioned that you’ve always been athletic. Were you a beach freak before this casting? Is it true to who you are?

It is. It’s very much an homage to my upbringing. I grew up in Florida between Coco Beach and downtown Orlando. Spent a lot of time at Coco Beach, surfed there all through high school. I was kind of a rebel in my early high school years, we’d go down to the beach and break into the surf shop pool, use fake IDs at the Hilton and get whatever beers we could, dig holes in the beach and use our surfboards as roofs, and sit under there. You know, be underage drinking some beers. John B and myself definitely have some similarities and that lifestyle.

Watching the pilot of Outer Banks reminded me so much of The O.C. There’s literally a fight that breaks out at a beach party.

I watched The O.C. now because it’s been referenced a couple times and I was like “Ah! We missed a good little Easter egg right there.”

Did you watch any teen shows before playing John B?

I have a guilty pleasure in Gossip Girl, for sure. I am a Penn Badgley fan boy to the extreme. He can stalk me and kill me whenever he wants. I still can’t believe he was Gossip Girl. I didn’t waste a single minute watching it.

How did you approach John B’s romantic moments with Sarah?

Maddie Cline, who played Sarah, Jonas and I wanted to do justice to shows of the past and create a really authentic love experience. Gossip Girl, One Tree Hill, The O.C., even 90210 — you watch these shows and you genuinely think these people are in love with each other. We did a lot of research, did a deep dive into those shows, and made sure we followed the structure of how those worked. We decided to strip away the layers of the physicality of it and focus more on the intellectual connection between the two of them. John B and Sarah obviously don’t have the same upbringing. They fall in love not because of what their worlds bring, it’s about what their emotional connection is. We just really wanted to make sure that Maddie and I became good enough friends to where we knew each other and find little ticks and nuances that would make each other laugh, and make sure we translated that into the performance.

How did you deepen the friendship with Madelyn and the cast?

We spent so much time working together. It was really great because the entire cast all lived in the same apartment complex. I lived with Rudy who plays J.J., J.D. who plays Pope and Austin who plays Topper lived a couple doors down. Maddie lived on the floor below us. Drew who played Rafe lives in a building maybe three minutes away, Madison Bailey lived five minutes away. On the weekends everybody would come over, play games, blast music, eat food. We had a lot of time collectively as a cast to really sink our teeth into — not just mine and Maddie’s relationship — but everybody as a whole. It was kind of this natural organic thing for everybody.

I’ve been creeping a little bit on Twitter and people loved the chemistry not only between John B and Sarah, but John B and Kiara element as well. I think it’s just a testament to all of us being such great friends inside and outside of work and allowing each other the creative freedom to really dive into these relationships in ways that the world is going to appreciate them.

As someone who creeps on Twitter, how do you approach reading reviews?

I think coming from an athletic background, if you’re not willing to take a little bit of criticism, then you can’t get better at your craft. I definitely read some reviews, both the good and the bad. Everybody’s going to have their opinions and say what they want to say. I think the great thing is that it hasn’t really been criticism on the craft or on the acting, it’s biases on them on liking the story for whatever reasons. You take it with a grain of salt. And at the end of the day, anyone who’s willing to invest their time and watch the show, I’m appreciative of that. You got to learn to take the good and the bad and not take it in a personal way. I’m not John B, I’m Chase. I have to separate myself from the work life from my personal life and not bring my work-life home with me. It’s about taking the criticism and using it to shape the character into something better for season two, hopefully.

Speaking of season two, what are you looking forward to?

Oh, so much. I think the best part of this show is that we’ve mastered the cliff hanger. To be in a situation where so many questions need to be answered and leaving all these stones unturned is super exciting. Where do Sarah and John B go? What about the Pogues? They think their best friend is dead. Then there’s Ward, who John B threw under the bus when he exposed him to the special forces unit. As a fan of the show I'm pumped to see if there’s a second season.

How does it feel having the show come out during quarantine?

It’s wild for sure. Like right now, we’re talking on the phone where otherwise some of this stuff would have been in person. I think it’s really gratifying to give people a little bit of an escape from the reality of what’s going on. It’s good to see people take this so seriously and not just protect themselves, but others in their community. For me, it’s like let’s give everyone a breather from reality with a little under 10 hours of a guilty pleasure of some sort while the world is in shambles. I’m happy Outer Banks can take people out of these otherwise scary times.