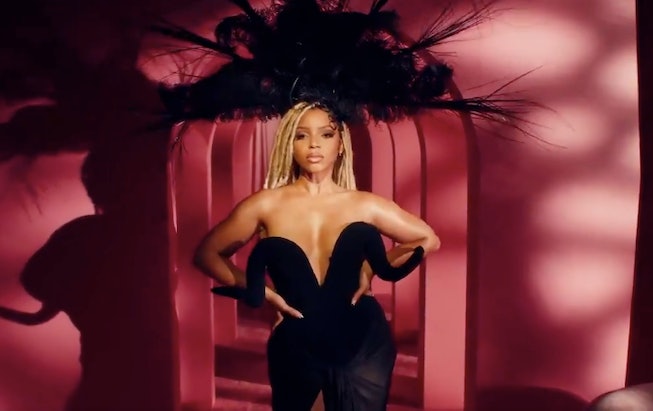 Chloe Bailey is making her solo debut with the single, “Have Mercy.” The singer posted a teaser on Instagram announcing the song’s release, along with the music video, which drops Friday.

In the video we see Chloe wearing a plaid, hot pink outfit while standing on top of a matching pink sorority house. The teaser then cuts to clips of the singer posing in Met Gala worthy dresses, while the track's bass thumps in the background. Along with the video, Chloe also posted a photo of the “Have Mercy” cover art — bearing a strong resemblance to her mentor, and producer, Beyonce — along with a picture with her backup dancers, dressed in matching workout uniforms.

The dance track is an unexpected departure from the music Chloe creates with her sister, Halle. Last year they released their third, and most successful, record, Ungodly Hour. The album received three Grammy nominations: Best Progressive R&B album, Best R&B song (for their hit- single, “Do It”), and Best R&B Performance. It was also celebrated at the 2020 VMA’s and E! People’s Choice awards.

On Thursday, Chloe wrote on Twitter of her solo debut, “honestly guys i was a bit sad last night because i’m so scared and anxious. i just really want you all to know i’ve been pouring my heart into this and can’t wait for you to hear. it means a lot to me, it’s finally almost here.”

Though their group is still intact, Chloe reportedly pursued a solo career to explore her own sound. She’s been labeled the “sexy sister,” and is often bullied for expressing her sexuality through fun photoshoots and dancing videos. This album dismiss those critiques in favor of self-love.

In an interview with Billboard, Chloe said, “I’m a pretty sexual being and I feel confident in who I am, and in the skin I’m in. I think it’s so beautiful when humans appreciate their bodies because that’s what carries us through in the world and it’s not a nasty or gross thing.” She also noted feeling “the most liberated and happy” while creating the record, which has been in the works for over a year now.

Back in 2019, she began recording in her bedroom, and made fifty songs which were narrowed down to create her upcoming (and currently untitled) album. “I’d be making my own beats and working on songs and ideas for this project that I knew would come, I just didn’t know when,” she said.

Later that year her sister went to London to begin production for The Little Mermaid, which gave Chloe enough time to fine-tune the project. While working she says she found confidence as an independent artist, telling Billboard, “I always have my sister’s support, and she will always have mine, no matter what we do together or individually.”

The full album is reportedly finished, but the release date is under wraps. Until then we can enjoy Bailey’s first single tonight, and watch her solo performance-debut this Sunday at the MTV Video Music Awards.