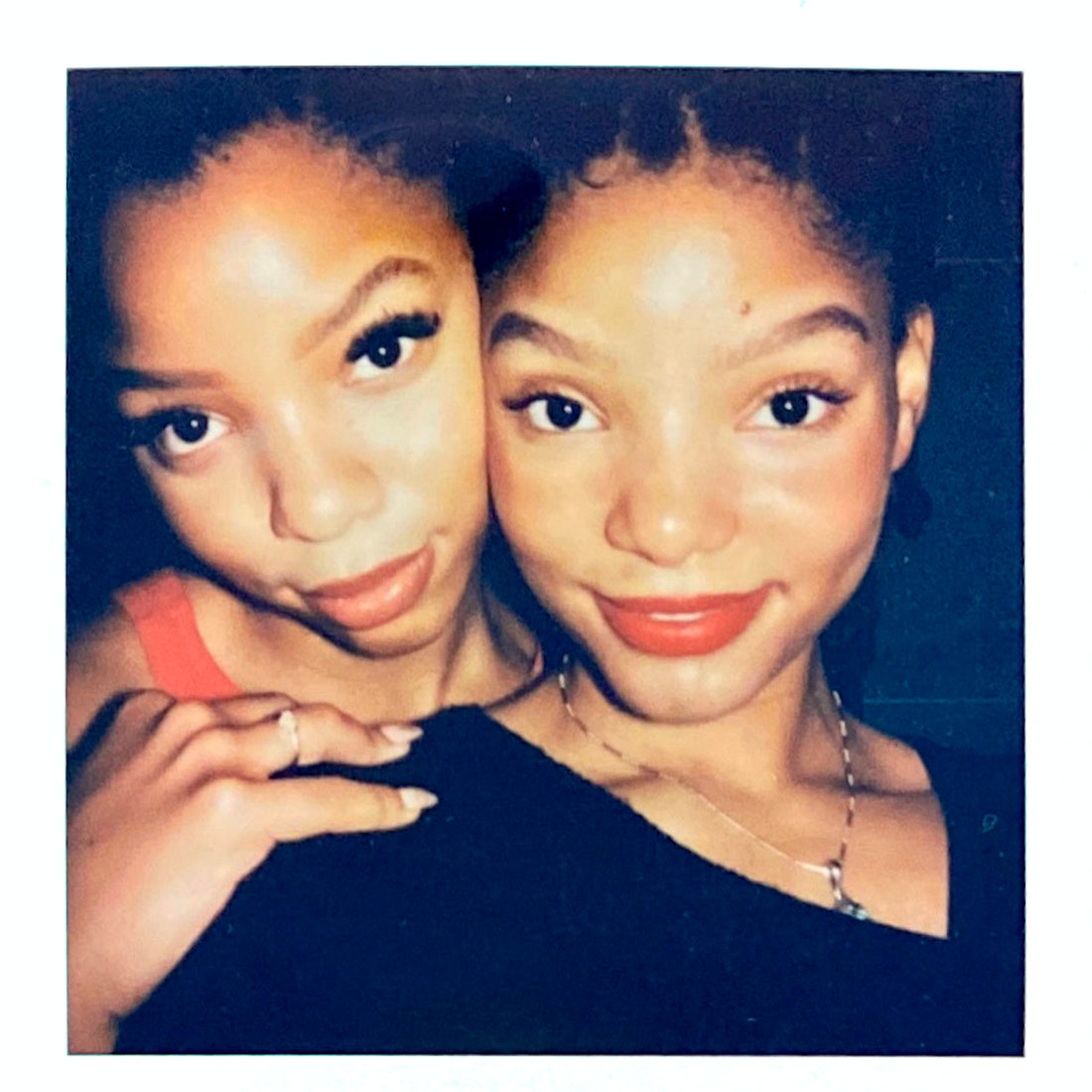 The sister duo talks exploring their sensuality and staying creative in quarantine.

It all started with a mood board.

Back in December 2018, sisters Chloe and Halle Bailey, along with their younger brother Branson, wanted a weekend away — a “free your mind retreat,” in Halle’s words — to get some creative juices flowing. They hopped in Chloe’s Mini Cooper and headed to Palm Springs; 48 hours later, they left with 15 new songs and the spark of an album. Once home, they took that spark, plus a few old magazines, and created the mood board for what would eventually become their second album, Ungodly Hour. “There was a specific phrase that we were drawn to: ‘the trouble with angels,’” says Chloe, 22. “We didn’t know what we liked about it, but it stuck out. We picked a bunch of edgier images, including nude women and nude men to symbolize baring our souls and being naked in the music… After we finished the album seven or eight months later, we looked at the mood board and we had articulated everything we wanted to.”

Released on June 12, Ungodly Hour has received rave reviews for the sister duo. “Chloe x Halle shed their innocence with grace, as they do with everything else,” wrote Pitchfork, while Rolling Stone called it a “beautiful example of sisterly solidarity.” The album is a powerful, hit-filled record that’s made for the dance floor, while also seeing the duo — who were 19 and 17, respectively, when their first album The Kids Are Alright came out in 2018 — at their most provocative yet, both lyrically and visually. The album cover shows the sisters in matching latex mini dresses by Venus Prototype, standing intertwined, with gleaming metal wings protruding from their backs. “This album felt a lot darker, a lot naughtier than our usual selves, so we wanted to mirror that in the album cover,” says Halle, 20. “We wanted to show that we are strong and powerful and sexy. The latex did just that. Then the thing with the wings is to show that yes, we can be angelic, we can be fragile, but at the same time we are strong and built to withstand anything. And as a woman, you can be all of the above.”

On a recent morning in June, the sisters are dressed down in comparison to their hyper-stylized cover, but no less put together: Chloe wears her hair pulled back with large silver hoops and a glossy red lip, while Halle sits next to her in a ruffled turquoise blouse. The fact that they are camera ready at 9:30 a.m. — on a summer Friday, no less — is not surprising, given the pair’s reputation for professionalism (they are, after all, graduates of the Beyoncé School of Media). They answer each question thoughtfully, rarely speaking over each other or showing signs of disagreement; the only time the Zoom call — a notoriously chaotic interviewing vessel — gets vaguely off track is when their mom calls a question from another room (and even then, they swiftly mute their side of the chat).

The pair’s politeness, however, should not be confused for passivity. In both their music and in their beliefs, Chloe and Halle are quick to speak truthfully and clearly about what they believe in. Ungodly Hour was originally supposed to be released on June 5, but following the death of George Floyd and riots against police brutality that followed, they decided to push it back a week. “We were collectively mourning, in a way,” explains Chloe. “It felt very heavy in that week, especially. Being young, Black women, we feel very attached to what’s been going on. L.A. is usually always sunny, and it didn’t help that the sun was gone that week. We really felt it from all angles. We didn’t want the attention on us at that time.”

Instead, like many of their peers, they took to social media to make sure their voices were heard. “With all the things that we stand for and trying to bring about change and justice, we have to use our platform to speak up,” says Halle. “I’m proud to be a part of this generation. We’re not afraid to speak up and let our voices be heard. We are demanding justice. We are demanding basic human rights. Our skin color should not be a death sentence. Every time we see our peers speak up, we speak up right with them because we have to. It’s our duty as young Black women.”

When the pair eventually did release the album, its critical acclaim was met just as wholeheartedly with mass appeal; here was an album from two young Black women totally in control of their power (in addition to writing and performing, Chloe also produced nearly every track on the record). In extremely online terms, there was no choice but to Stan. “We have seen a lot of positive comments about the album, and that makes us so happy because this has been so important to us to release this project, especially during this time when we really feel it can be a healer,” says Halle.

With 13 songs that tackle topics ranging from heartbreak to the pressures of fame, creating the album was especially healing to the singers themselves. “In the beginning, we [held back] a little bit, but then we were like ‘screw this, we’re going to bare our souls and our hearts,’” says Chloe. “Lauryn Hill’s The Miseducation of Lauryn Hill, she was baring her soul and you connected with it. You felt, ‘She’s going through this, I’m going through this, and this music is for me.’ We want to create music like that.” Two major themes of the album, Halle adds, are the notions of confidence and vulnerability, as well as how they intersect. “The ideas are married to each other; sometimes you feel great and other days you are not so great,” she says. “For the album, we wanted to combine the two so that when you listen to it, you feel like you’re going through the phases of your life.”

Halle was in the midst of a new phase of her life — the starring role as Ariel in the live action remake of The Little Mermaid — when COVID-19 sent her back home from London, where she was in her third month of rehearsals, to quarantine with her family in California. But even with the album under their belts and the country essentially at a standstill, the creativity flowing within the Bailey household hasn’t stopped. Now that the album is out in the world, the pair have focused on creating groundbreaking at home performances, practically all of which have gone viral immediately after. “We realized that the possibilities were endless when we did the Dear Class of 2020. I was in awe like, ‘This looks like an actual concert.’ After that, the bar was set.” In the performance, the duo perform their hit “Do It,” swathed in white and crystals and shrouded in a circle of strobe lights. Between the cinematography, the choreography, and the overall perfectionism of it all, you’d never guess it was filmed in their backyard.

“After that, the bar was set,” says Halle. “And I can’t wait to keep raising that bar with my sister.”