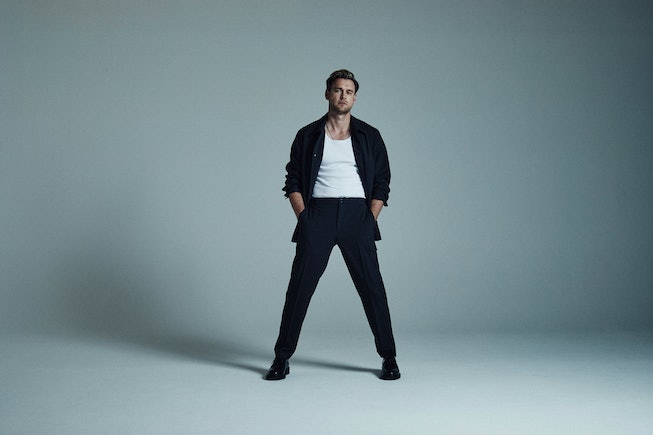 As the saying goes, Chord Overstreet has been booked and busy lately. On Thursday, November 10th, his long-awaited Christmas rom-com, Falling For Christmas — which also heralds the comeback of Lindsay Lohan — premieres on Netflix. Over on AppleTV+, he currently stars in the hit show Acapulco, currently the number one show in Mexico. And in between shooting it all, he’s managed to drop a brand new single of his own, “Sleepwalking In the Rain,” out now.

But Overstreet, 33, doesn’t think about all of it too much. In fact, these days, he really only has one M.O.: to bring you the simple joy of comedy. Here, the actor talks working with Lohan, making Christmas music, and the art of physical comedy.

How did Falling For Christmas first come to you?

It came through my agent, and she sent me the script. They wanted to know if I would do a read with Lindsay for chemistry. I read the script and it was really fun and warm and just feel good and Lindsay's great. So it was just an easy no-brainer for me.

Had you met Lindsay before?

Yeah, briefly. Not enough to where we had any kind of one-on-one time to get to know each other, but just briefly as much as you could know somebody through a handshake.

What was it like, then, being thrown in and filming a rom-com together?

I mean, she's great. She's a pro. It was really fun. Getting to bunker down for two months in Park City is not bad. It was a great experience, and I would do it again just because I had such blast doing it. I love comedy. That's my favorite genre of movies. And if I could do comedies forever, that would be ideal.

How was filming a Christmas movie? I feel like that's a genre all on its own.

Everybody has such a warm association with Christmas. Everybody's in a great mood at all times. You can't film anything with Christmas and be upset that you're in that spirit two months before Christmas hits. And it's just like, I got to have Christmas for three months last year.

Were you sick of it by the time Christmas actually rolled around last December?

No. If anything, I felt more in the Christmas spirit and Santa Claus for my family just going around and just wanting to... I was probably a little too Christmasy.

Do you have any favorite Christmas movies?

Elf is one of my favorite all time Christmas movies. Christmas Vacation. I mean, Bad Santa is up there. Man, there's so many good ones. A Christmas Story.

You just mentioned that you love comedy and there’s a lot of physical comedy in this one.

There is some physical comedy in this, which Lindsay's great at. And I fancy myself a little bit physical. I love Jim Carrey. I love a lot of just big, loud comedy. In one scene, we're supposed to be skiing downhill, and they actually have us hooked up to a trailer and a big snowplow pulling us. It’s funny when you see it from the monitor, and then you see behind it, and the big truck pulling you up.

Between this and Acapulco, you’re really ingrained in the streaming world right now. Do you feel that when filming?

I just think that streaming's great. Streaming kind of lends itself to exposure on such a big scale because our show is not just in the US. It's worldwide, and we're showing love to a bunch of different countries that speak Spanish, and some that don’t. And it's really cool that you're able to have that kind of reach versus just a local reach. But then you have shows like Glee, which was a network show at Fox, which was globally, as well.

Have you felt the global impact of Acapulco?

I just got notified yesterday that our show was the number one show in Mexico right now, which is insane. It’s so cool to be a part of a show that I'm actually a fan of. I'm watching it and I'm like, ‘Oh wow, this is really fun.’ The comedy is really great. The writing's great. And it's just a wild, fun ride.

On top of all these new projects, thanks to TikTok, Glee is getting a whole new surge of popularity as a new generation is discovering it.

Glee touched on so many cool issues. I think we were kind of the first to touch on a lot of issues that are getting dealt with now. The stuff that we were dealing with, kids still feel that way going through high school when your emotions are a lot more intense. With all these streaming platforms, you have access to shows like Friends. People are still watching Friends. You have access to Glee years and years after. And I think it's a test to the people that do those shows that they still hold up. So I think it's awesome. I think people need entertainment and to take a break from reality.

How much of doing that show for so long and so early in your career informed the next steps you did after Glee and what you wanted your career trajectory to be?

Honestly after doing that for so long, I went into a cave and just started writing and making music. I came from music and that's really important to me. At the time, I thought, ‘If I don't do this now, I don't know how I'm ever going to do it.’ I put the acting stuff on the side for a little bit. And then for years doing that, I realized that they are two things that are such a part of me that I'm like I can't not do both. For now, I can do both at the same time. I just have to make sure I set a set aside time for both.

How did you eventually find that balance?

I do music when I'm alone at night. But I took a good chunk of time to where I solely just did music to where I have probably several records stacked up on my hard drives ready to go. But I'm just kind of waiting for the right time to put it out. I'm kind of in this space now where I can be as creative as I want with developing movie concepts or shows. There's so much free time as an actor that's like, I don't know how people just do acting because if you're in between roles, and you've got six months off, it's like what do you do with your time?

When we were finished filming Falling For Christmas, I was like, ‘hey, do you guys need me to make Christmas music for the movie?” so I ended up writing a song called “Everybody Loves Christmas,” and it's in the movie.

Was it difficult to write a Christmas song?

It's really challenging. And it's interesting because you would think, you just write about ho, ho, ho, Santa Claus. That's not reality. I'm such a nerd for Christmas that I love Christmas music, so it was one of those things where I really got to channel my inner Mariah Carey.

How do you see this balance continuing as you get busier?

In the next five to 10 years, I would love to have a bunch of comedy movies whether I develop or star on. I think that comedy is such a fun vehicle that brings a lot of joy to people, and I love making people laugh. And so I think that would be a great spot to live in for the next five to 10 years, really just diving in, getting my hands dirty because I'm just kind of a geek when it comes to going to these, whether it be the Groundlings or UCB or the Comedy Store. I just love just studying comedy.