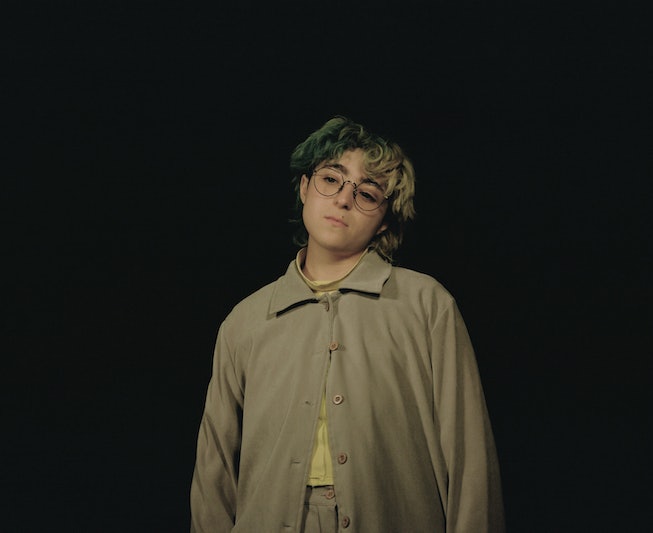 “I feel a lot of the time I am very, very serious about my art,” Claud says over Zoom one recent afternoon. “But sometimes, you have to let loose a little bit and just, like, have fun with it.”

It brings to mind that one time Claud swayed with a blow-up doll after getting rejected by a crush in the music video for their song “Never Meant To Call.” Or when they fully recreated 500 Days Of Summer’s iconic reality vs expectations scene — with Claud as Joseph Gordon-Levitt — in their “Wish You Were Gay” music video, that yes, also ended with Claud reuniting with the same blow-up doll. Though no inflated plastic people make an appearance on their debut album, Super Monster (yet), Claud's latest sachet of bedroom pop songs sparkle with jokes yet unwritten.

To be clear, 21-year-old Chicago native and New York-based musician’s new album is not bitter about love; it’s actually quite the opposite. Over 13 glowing and tender pop songs, Claud — real name Claud Mintz, and who identifies as non-binary — shares their trials and tribulations around that pesky but magical emotion, one they fall into hard, and often. (“I fell in love like a fool overnight,” they state on cheery opener “Overnight,” while on the mid-album “In Or In Between,” they anxiously wonder “is this going bad?”)

The songs, which altogether form a tidy bildungsroman of sorts, find their charm in the wide-eyed mix of earnest lyrics, and the un-seriousness of its sound (e.g.: an effervescent pop of a soda can interrupts the melancholy on lovelorn “Pepsi"). And even on “Ana,” where Claud breaks-up with someone so they can go and explore the world, the guitars shimmer and synths ambitiously soar — because painful moments still deserve a memorable, cinematic soundtrack.

Super Monster is the endearing introduction to the burgeoning, and bright universe of Claud, the first signee on Phoebe Bridgers’ new label, Saddest Factory, and one of pop’s most promising new acts. Below, speaking from their grandma’s home in California, Claud explains how the album came together, the stories behind some of the record’s most memorable tracks, and why they decided to sign to Saddest Factory.

When did this album start forming in your head?

It's funny, there was no start date. The album really turned into a collection of songs I've written over the last few years. There was definitely an end date, but I can't really say there was a start date.

There were a couple of different milestones in the record process. I spent two months around this time last year writing every single day and trying to collaborate with a bunch of different people and really, really honing in. And then right when the world was starting to shut down a bit, I spent months in Chicago at the house I grew up in rewriting and reworking and starting new songs from scratch. And then that's sort of when I realized, "Hey, I think I have a record here."

Was any part of the process daunting to you at all?

I didn't want to release a record or even start a record until I felt like I knew what I wanted to say. And in this instance, when I started to look back at all these songs, I was like, "Okay, now I know what I'm trying to communicate and what I'm trying to get across. And I can rewrite these songs and reproduce them to make sure they capture my message in my essence." It was a huge process.

This record is talked about as a coming of age album. Do you feel like you've grown up while you were working on this album?

Yeah, just naturally, over the last couple of years. I uprooted my life just by turning 18 and moving out. All the events along the way have taught me about different aspects of life and love and relationships. I guess that's naturally what coming of age is.

What’s something you learned about yourself while you were working on this record?

The main message of the record and the main thing that I wanted to communicate is that even when it doesn't feel like it and even when you don't feel like dating, you still are worthy of love. You deserve to be loved and you're worthy of it. That's something that I definitely came to learn just throughout the last few years.

Were there any challenges in either recording the songs or deciding what songs to put on the record?

Yeah, definitely. I had a demo playlist of like 50 to 60 songs that I was trying to narrow down and choose from. And it took me a while to really decide which songs would go on the record and which ones I would have to cut. That was the most challenging part for me, I think, was picking the ones that I felt like told the story.

A lot of the production is really fun. I was really charmed by the soda can popping sound on “Pepsi.” How did that come about when you guys were producing that track?

That one was really fun. My friend Josh had sent me this little beat with the soda can sound, and that's why I decided to call the song "Pepsi." And I added the bubble sound later to add an extra element of soda and pop. We were just really just having fun with it. Trying not to take the production too seriously.

On the record you have a couple of songs where the title is someone's name. Was that something you were worried about, including details of your private life in your songs?

Actually, yeah. And it's funny because both of those names I changed from the original. Those are names that I made up. For example, like the song “Ana” is actually not about my life at all. I decided I wanted to imagine myself as this married man with a wife, who decides he wants to leave his wife to go do some self exploration and really go find himself. And I thought that was a really interesting concept. And I thought a really beautiful name is Ana. And the song is like a letter from him to Ana being like, if I don't take this chance then I never should have been your man in the first place.

Track number 10, “That's Mr. Bitch to You,” that phrase and the way you sing it is great. How did that song came together?

This guy had called me a bitch and I was so taken back and really offended, and the first thing that came out of my mouth was, "That's Mr. Bitch to you," and my friend had overheard it and was like, "Holy shit. You have to write that down. That has to be your album title. I can't believe he said that." And I was like, "I can't believe I said that." If a man calls somebody who's just not a man a bitch, I find it to be one of the most misogynistic things ever. And I was really offended. So that song was really easy to write. It's just about rejecting misogyny and our patriarchy.

Finally, congrats on being the first signee to Phoebe Bridgers’ Saddest Factory record label. How did that deal happen, and how has it been?