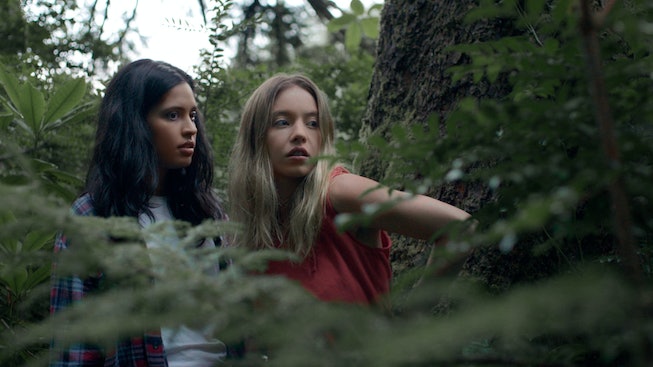 An idyllic lake house in the Pacific Northwest seems like the perfect spot to get away from it all, whether it's during a global pandemic or to lick the wounds of a broken heart. And in Clementine, it's the latter.

The slow-burn, art house thriller finds an anguished Karen (newcomer Otmara Marrero) fleeing Los Angeles after a one-side breakup to seek emotional refuge in her ex-girlfriend's lake house surrounded by quiet, verdant woods. Instead of finding peace and relaxation in solitude, Karen crosses paths with the flirty teenage girl named Lana (Sydney Sweeney) — and it just so happens that Karen happens finds her completely alluring and irresistible. Clementine's trailer ramps up the tension for a sapphic coming-of-age story that feels downright chilling.

Written and directed by Lara Jean Gallagher, Clementine examines the power dynamics in female friendships, love, and letting it all go. The film, which premiered at the 2019 Tribeca Film Festival, also doubles Gallagher's directorial debut. Sweeney has hit the prestige television circuit with roles in Sharp Objects, Euphoria, The Handmaid's Tale, as well as the big screen with Once Upon a Time in Hollywood.

Since theaters are locations non grata during the ongoing COVID-19 pandemic, indie film distributor Oscilloscope is giving it a release in virtual cinemas beginning May 8. Oscilloscope also distributed cult-favorite films like 2018's Madeline's Madeline and 2016's The Love Witch. Find Clementine screenings here, and watch the trailer below.