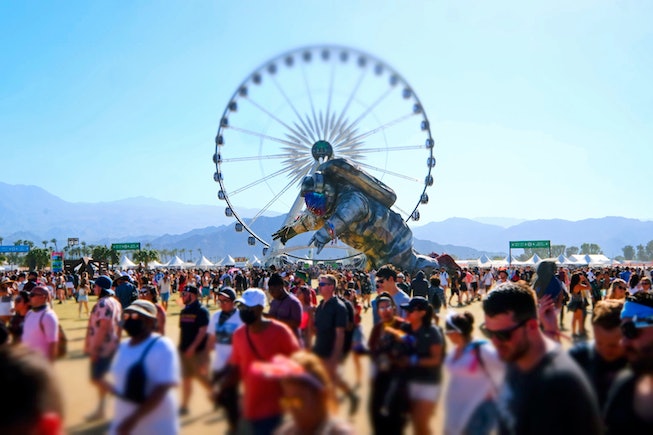 After announcing that they'd be postponing the 2020 festival from April to October, Coachella organizers are now reportedly trying to gauge which artists would instead be available to play in 2021 — a sign that this year's event will likely be cancelled, according to a new report from Bloomberg citing a source "familiar with the matter." At the time of writing, Goldenvoice has not officially announced the cancellation and did not respond to Bloomberg's request for comment on the matter.

Goldenvoice, the organizing body that puts on Coachella and the Stagecoach festival each year, announced the two festivals' postponements back in March, just a few days after the Riverside County area confirmed their first case of Covid-19. Coachella was rescheduled to take place the weekends of October 9,10, and 11, and October 16, 17, and 18, and Stagecoach would take place the following weekend, October 23, 24, and 25.

"At the direction of the Country of Riverside and local health authorities, we must sadly confirm the rescheduling of Coachella and Stagecoach due to COVID-19 concerns," the organization wrote in a posted statement at the time. "While this decision comes at a time of universal uncertainty, we take the safety and the health of our guests staff, and community very seriously."

Rage Against the Machine, Travis Scott, and Frank Ocean were set to headline the 2020 festival, along with performances from Megan Thee Stallion, Summer Walker, Lana Del Rey, and more.

Shortly after Goldenvoice announced the postponements, new insight from health experts interviewed by the New York Times estimated that live concerts wouldn't be feasible to hold until fall 2021 at the earliest. And as the weeks go by, and as more and more festivals forgo postponing for straight-up cancelling, it seems that prediction will sadly, come true.