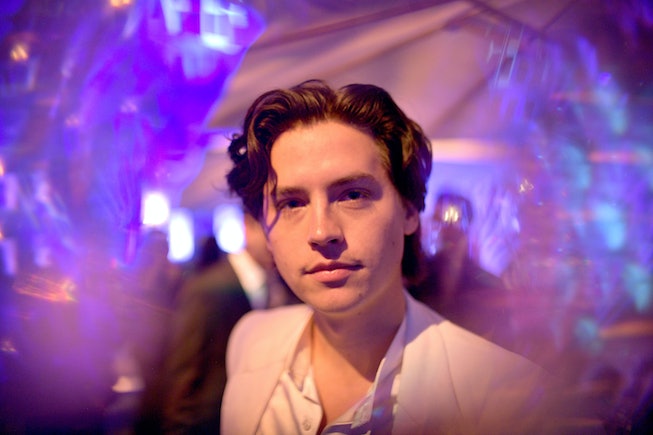 While quarantine has forced production for new films and TV series around the world to a grounding halt, all that extra time indoors has resulted in a skyrocketing demand for entertainment. It's also brought back the relevancy of an art form more associated with older times: the radio serial. Luckily for us, Cole Sprouse already had a creepy new serialized podcast perfect for horror and mystery fans, Borrasca, wrapped up before we were all ordered inside. The Riverdale star teamed up with QCode to produce the story, which was created by The Haunting of Hill House writer Rebecca Klingel.

In Borrasca, Sprouse plays Sam Walker, a 17-year-old who moves to Drisking, Missouri, with his family and discovers a strange treehouse in the woods that one must carve one's name into before entering or risk disappearing. After Sam's sister Whitney and several other people go missing, Sam and new friends Kimber and Kyle set out to solve the treehouse's mystery. The setting of a small town in the Ozarks, Sprouse says, "serves as a catalyst for the forced maturation of a lot of the characters, and the town is also character itself."

NYLON caught up with Sprouse on the day of the podcast's premiere to learn more about why he got involved, the unique challenges and benefits of voice acting, and what he's watching and playing to get him through quarantine.

How are you holding up?

I'm doing all right. I'm in L.A. It's as well as a person could be doing in quarantine. It feels strange to talk about any kind of quality of existence when you're not on the front line or you're not a medical professional or an essential worker. So it's usually people away from there. But I think, like all of them, we're all sitting and doing it one day at a time.

Absolutely. Well, let's chat about Borrasca. How did you get involved in the project?

I think in the beginning it started with an interest in doing some voice acting. And then I sat down and met with the folks over at QCode, and they had already produced a couple other projects with some actors that were more like radio serials. So they've done a couple, one with Rami Malek and one with Chloë Grace Moretz, and I think they have a couple other out now. They were long-form narrative podcasts with a bunch of actors in a room that would record all the same time, and really try and revive a radio play kind of genre. And it piqued my interest immediately because it seemed like something that I could fit within a Riverdale schedule. And also because I've seen those intellectual properties have a tremendous potential for growth outside of just the podcast medium. So we had sort of dabbled back and forth on wanting to do something. The story of Borrasca had popped up, and then Rebecca Klingel, who ended up writing the treatment for the episode, ended up creating this incredible eight-episode series. And then it took off from there.

I was just thinking about how this is the perfect time for the radio serial to come back, with everyone being locked up.

You know, it's an unfortunate coincidence. But I think if this quarantine has shone a light upon anything, it's been that people have really taken to the art as a method of distraction or immersion into a bit of fantasy setting outside of their quarantine moment. We had arrived with the idea that if we push through and we polish as quickly as we can and release it during the quarantine, it might help people get immersed in that sort of thing. And it would be a good time for people to digest the content and sit with it. I think right now we're all hungry for minor distractions or large distractions.

Absolutely. And can you walk us through Borrasca and your character's journey?

Borrasca started as creepypasta on the internet that got a lot of traction and had this cult following for a while. It's an atmosphere of environmental horror that's set in a small town near the Ozarks. It follows a couple characters — three characters specifically, one of which is my character, Sam — from adolescence to around 25 to 27 years old as they begin to unravel this larger concern and atmospheric core that exists within the town, without spoiling too much. I liken it quite a bit to Charles Burns' Black Hole, the graphic novel that I used to be fascinated with back in the day, which does a really, really wonderful job of turning the environment and the setting, the town itself, into a character. And that's the goal for Borrasca as well. The town serves as a catalyst for the forced maturation of a lot of the characters, and the town is also character itself.

And that sort of immersive story, is that typically what you're interested in when you're reading or when you're watching films or TV or listening to podcasts?

I think I don't really have a specific flavor that I stick to. I don't really keep myself from any kind of flavors or genres. But I know that I grew up watching a lot of claustrophobic horror movies with lots of practical effects. Like John Carpenter's The Thing is a great example of something like that. So I've always had a fascination with that kind of genre and seeing how we could bring it to life. And then it seemed like a perfect introductory avenue into that. But yeah, I hope that people get the same sense that I wanted after they listen to it. It's very much one of those podcasts that you can plug into your ears before you're going to sleep or when you're on a long drive, which seems to kind of be the bread and butter of the listening audience. Now, in this instance, during quarantine, people have a lot more time to sit down and listen to things around the house. But the goal is the whole atmosphere for immersion. And I think QCode did a really wonderful job with post production and making that the case.

You mentioned that you wanted to try out voice acting. What about that has been appealing to you?

I suppose the fascination with voice acting starts when you're young, or at least in my instance, watching cartoons, playing video games, and really falling in love with a lot of those characters. So I think a nostalgic part of myself could take that into my adult career. But I also think, in terms of method, it was always interesting to me to see the fine line that's toed between imparting an emotion upon an audience when there are no physical, emotional cues to give. And I think that was something that took me a couple hours to get into. We had gotten all the voice actors into the studio at the same time to act out their parts, which allowed us to be fully physical and allowed us to look at each other and take what would have been a fully physical performance into an otherwise completely auditory medium. And I think that's really clever, and I think that lends a lot to how people listen to the project.

You know, at the beginning of the pandemic, I ended up getting myself that Criterion Collection that all of my film dude buddies have been slapping me on the wrist about for years. And I just started watching a lot of things that I targeted specifically that I've been meaning to watch for a while. I watched the fabulous Baron Munchausen by Karel Zeman, which is something I had been desiring to see for a while. Then I got into a stint with Eastern cinema, South Korean. I did a bit of Japanese, which I had always loved, but there were some pretty large holes in my otherwise completed puzzle. So I started watching a lot of that. And then I got tapped out on movies and TV, like I think we all have at one point during quarantine, when you're just sitting on the couch so much that your ass leaves a perfect indentation. So I started playing video games a bit. But something like video games as a medium, for me, I rarely find myself doing homework, if that makes any sense. Even though it's an active participation within the gaming experience, I find that it's very passive for me mentally. Unlike when I'm watching film or television, I'm going, "Oh, look at the lighting!" I'm sitting there kind of doing my homework. So I've been getting into video games in the last month, as a way to get into a more toned-down state as an audience experience, if that makes sense.

It does. What games are you playing?

I have been playing Animal Crossing on the Switch, like, I think, the rest of the world. And which has been a lot of fun. I only brought my Nintendo Switch with me, so I've been playing that a lot with friends. You would be shocked to see the kind of people that show up on this game.

Borrasca's cast also includes Sarah Yarkin, Daniel Webber, Lulu Wilson, Beau Knapp, Lisa Edelstein, Aramis Knight, Cara Santana, Seychelle Gabriel, and Peyton Kennedy. It premiered May 25 via QCode, and a new episode will drop each Monday. Tune in to find out what happens, as Sprouse told us, "if you're into that creepypasta, late night horror stuff."