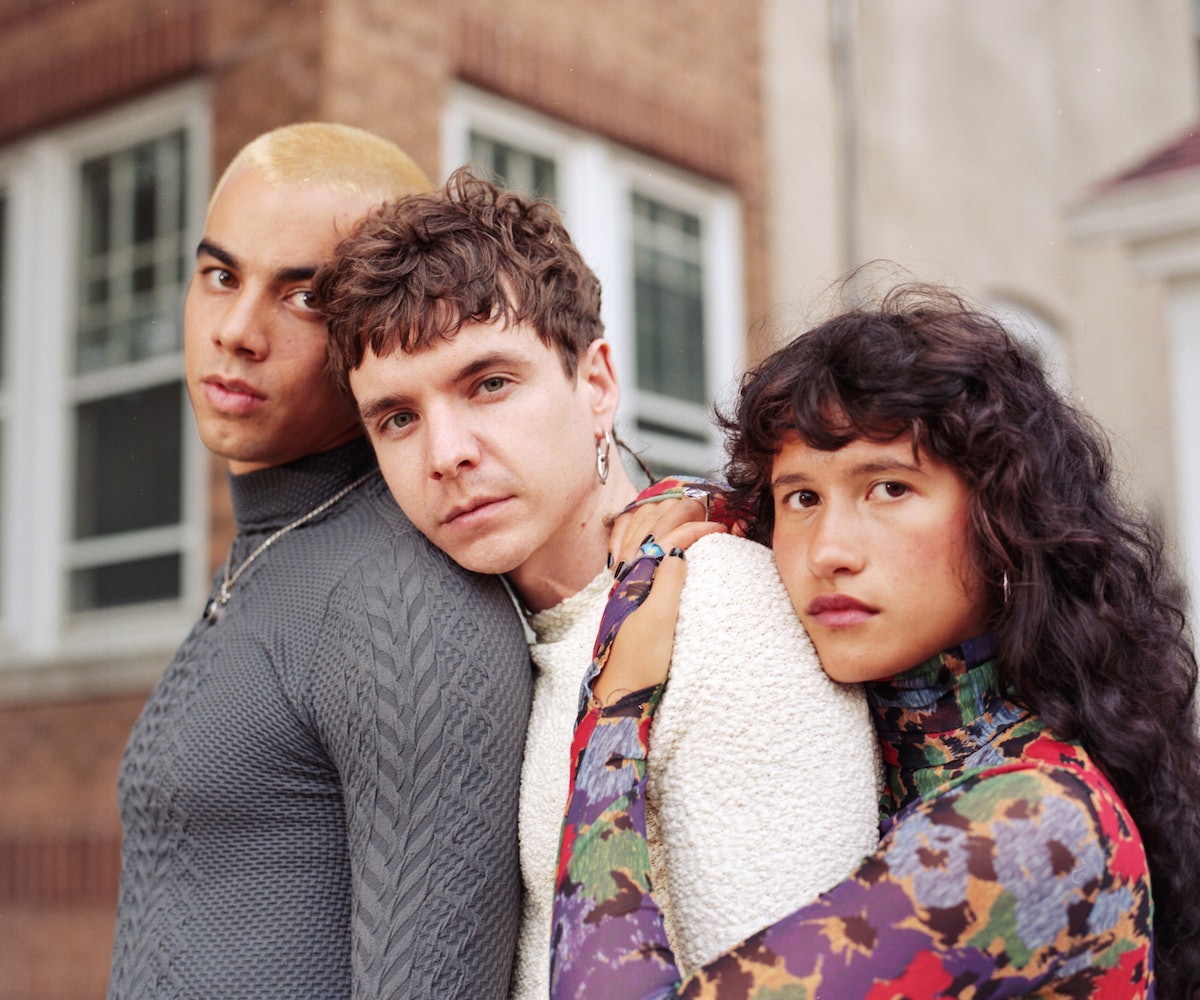 NYC synth-pop trio Couch Prints makes atmospheric tunes they like to pair with striking, slightly bizarre videos. "Tell U," their first-ever song released back in August, arrived packaged alongside an '80s sitcom-like music video that SNL would be proud to air; there's over-the-top makeup, uncomfortably slow zoom-ins, and a poisoning subplot that'd be right at home on any daytime soap opera series — all while their jangly, bright tune plays in the background. "I thought I'd tell you I adore this lie," vocalist Jayanna Roberts softly croons.

With such a fully actualized band identity, it's no surprise that the group has already signed with indie record label Luminelle Recordings, and are prepping to drop their debut EP, Tell U, on October 30. Couch Prints now shares their latest song, "Faces," another stunning tune that's all soaring synths and Roberts' crystalline vocals. Naturally, it lands with another creative visual directed by Erik Saltzman that features a slowly spinning chair, sweaty-looking face prosthetics, and extremely voluminous wigs. It's the stuff of Twilight Zone nightmares.

"'Faces' was a song I wrote way back, before Couch Prints was around," band member Brandon Tong writes in an email. "I’d been on and off with this person from my high school for like six years and it had completely shaped my whole worldview for so many years that a lot of the lyrics I was writing in some way referenced the relationship. Despite how obvious it was that it wasn’t working out, we kept ending up in the same place and recommitting to the same mistakes."

Experience the song about "surrendering yourself in the least romantic way possible" below, and read on to learn a bit more about the new trio.

What are you guys up to right now — describe your surroundings.

Tong: I’m at home, it's gray out and my heart is thumping from a combination of coffee and a YouTube journey through the “Top 10 NBA Dunks of All Time.” The setting is my room, small and well-lit and torn up from trying to find a hairbrush this morning.

Truax: I’m at a cabin in the Adirondacks that's comically cozy. Sitting on a couch next to a big moose head, looking out the window over a beautiful run of grass that leads to a dock. Our greyhound is running around off leash which he doesn’t get to do often, I forget how fast he can run. There’s no WiFi and only one person has cell service. Had to use a hot spot to answer these questions! It’s been nice to be off the grid for a bit and relax.

Roberts: Sitting on the J train looking out at the calm sky. Everyone is silent. I'm heading to my new favorite restaurant, Dotory. Their kimchi stew and milky rice wine are heaven sent. I just got a point and shoot camera from this new shop called Photodom. So sick, they sell film made by a woman in Brooklyn that has little hearts on it!

What inspired the concept behind the music video?

Jake, the director Erik Saltzman, and the creative director Cameron Tidball-Sciullo developed a narrative around the structure of the song. The verses represent the internal monologues that follow when you catch yourself falling into the same patterns with the same people, while the chorus represents the blind surrender to that same doubt as you move forward, thinking that this time, things will be different. Jayanna begins fresh faced and clean in the verses, and becomes increasingly decayed throughout the song, showing the stress and pain that the surrender to this relationship creates in her. Erik and Cameron are frequent collaborators, so it was fun to give them free rein and really let them run with their ideas.

The makeup and wigs are incredible — what was the biggest challenge when it came to getting that together?

It was such a dream to have Charlie [Le Mindu] do the beauty direction. A big challenge was finding a way to create affecting looks that felt fresh and new. However, now that Brandon has had a month or so with his orange extensions, they’ve become a pretty big part of his life, so the biggest challenge may end up being the day they come out.

When you guys aren't making music, how do you spend your time?

We’re finding that the reality of being a musician today is that so much of your life is doing things related to music that aren’t making it. In keeping up with the infinite stream of images and content we spend a lot of time creating photos, videos, and working on other projects. Luckily we’re all really creative and enjoy pushing ourselves and experimenting with new ideas and aesthetics. We spend a lot of time with each other too, watching movies or sitting in the park or whatever, cause we’re all best friends outside of Couch Prints. Obviously music is a big part of our lives, but it’s still just one facet of who we are as people.