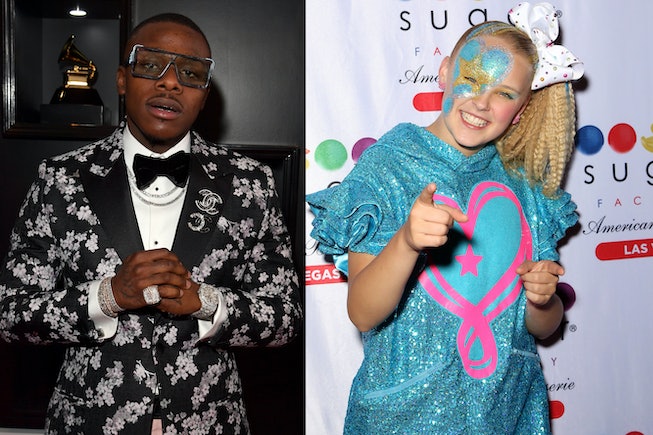 DaBaby may be known for his punchline-filled raps, but a recent freestyle including some wordplay about beloved children's YouTuber JoJo Siwa didn't quite stick its landing.

The North Carolina hip-hop superstar released a video over the weekend of himself freestyling over "BeatBox," a viral 2020 hit from Florida rapper SpotEmGottem. Throughout the track, DaBaby's signature shit-talking style is on display, including a line that sent Twitter into a frenzy: “Turn me up, n***as gon’ see why/ N***a, you a bitch, JoJo Siwa.” In the video, as he says the line, Baby holds up his phone to show a picture of a smiling JoJo Siwa.

Given that Siwa, who has a sugar sweet image, is only 17-year-old — and just recently came out, inspiring waves of love from the internet — the line was met with disparagement. DaBaby responded to the outcry, addressing Siwa directly to let her know that he meant no disrespect. In fact, the rapper wrote on Twitter, his 3-year-old daughter is Siwa's biggest fan — possibly why he had her on the brain in the first place:

"my 3 year old princess is your number 1 fan. I bought her every product you have out. She think she you. Don’t let em trick you into thinking id ever have a problem with you. My word play just went over their heads. All love on my end shawty, Keep shinning!"

Though Siwa hasn't responded yet, the denizens of Twitter haven't been able to help themselves with making memes about the exchange: