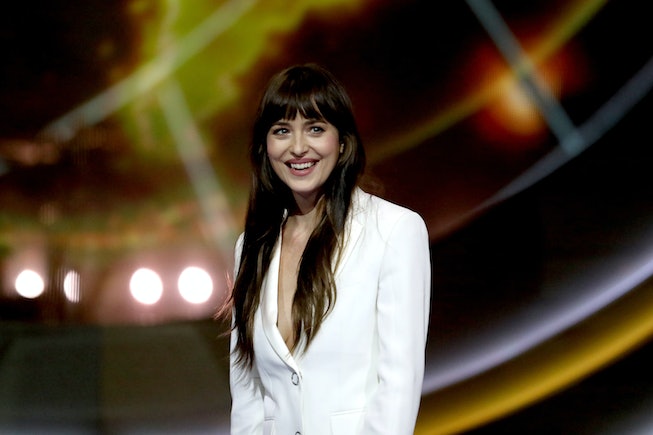 Of all the excellent films that floated criminally under the radar last year, few feel as robbed as The Peanut Butter Falcon, an uplifting drama about Zak, a young man with Down syndrome, who escapes from Eleanor, his caretaker in an assisted living facility, to pursue his dreams of becoming a professional wrestler. Poignantly funny and undeniably heartfelt, the film follows Zak as he finds himself aboard a boat owned by Tyler, a struggling fisherman. Together, the two take off towards a wrestling camp, but are ultimately tracked down by Eleanor, who ends up forming a bond with Tyler. The film starred newcomer Zack Gottsagen as Zak and Shia LaBeouf as Tyler, while Dakota Johnson rounded out the cast as Eleanor. On screen, the trio radiated natural chemistry, and according to Johnson, it was because they bonded so much on their off hours. In a recent Marie Claire cover story, she referred to Gottsagen as "one of the greatest loves of my life" while also complimenting LaBeouf as one of the greatest actors of her generation.

Speaking about the film, the Fifty Shades of Grey actress (who will next be seen in the Tracee Ellis Ross-starring music industry comedy The High Note), told Marie Claire, "I think Shia might be the greatest actor of my generation." It's high praise coming from the Film Independent Spirit Award winner, but don't think she's going to pander to his talent. After all, immediately after commending his acting prowess, the two-time Luca Guadagnino muse followed up by saying, "I wouldn’t say [that] to his face."