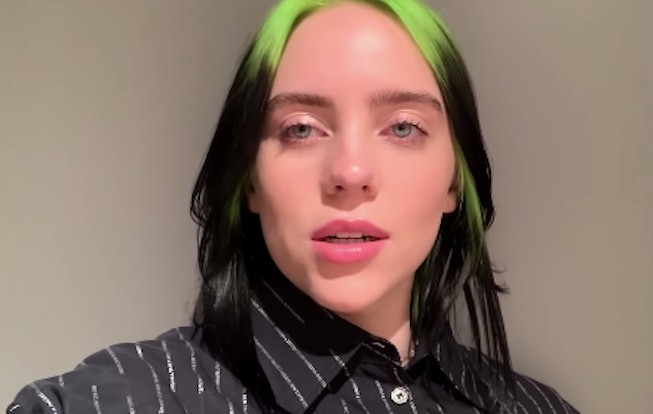 Yesterday, Netflix premiered David Attenborough: A Life on Our Planet, a new documentary about the famed natural historian's outlook on, well, our planet — how humans have worked against it in the past and how we can better work to save it in the future. As part of their promotion for the positively-reviewed new release, Netflix gathered a whole host of "famous fans" to ask Sir David for his opinion on any number of environmental concerns.

After a short congratulatory intro from soccer superstar (and Mr. Posh Spice) David Beckham, Billie Eilish popped up to inquire about the environmental impact on animals. "Hi, Sir David. It's Billie here," she began. "I wanted to ask you how do you cope with your personal feelings about all the animals that are losing their lives and/or going extinct? How do you actually deal with that as a human being? I don't understand. I don't know how."

In his typically stately voice, Attenborough told the five-time Grammy winner, "You feel desperate. I think the most astonishing sight in the natural world that I've ever seen — and one I shall never forget — [is] the first time I dived off a coral reef." The Cambridge-educated broadcaster then proceeded to recount his first visit to the Great Barrier Reef, admiringly recalling its "extraordinary beauty and complexity and wonder," its "wonderfully-colored fish" and its "creatures that you didn't even know exist." But when he returned to the same place years later, he continued, he found that all the life he once witnessed there was gone. "It was like a cemetery," he said. "It was stark white. It had died. It had been killed by the rising temperature that we, humanity, have created. It was a terrible sight and a terrible vision of what we are doing to the natural world."

Over the the rest of the 16-minute video, Sir David answered similar questions from people like Game of Thrones' Maisie Williams (who asked about connecting to nature in spite of the current pandemic-related travel restrictions), Asa Butterfield, Kedar Williams-Sterling, and Trish Allison from the Sex Education cast (who collectively asked for advice on how to reconnect to nature on a budget), and One Day at a Time's Isabella Gomez (who asked Attenborough to single out the "number one, top most impactful, breathtaking experience" he's had while exploring the planet).

(It was seeing birds of paradise, if you were curious. Sir David did a whole segment on the strikingly beautiful creatures for last year's Our Planet docuseries — which I'd highly recommend watching while under the influence.)

Watch the full video below. David Attenborough: A Life On Our Planet is streaming on Netflix now.

NEXT UP
Entertainment
New 'Emily In Paris' Photos Tease A Romantic Season 3
Life
Netflix Dropped A Sneak Peek Of Bridgerton Season 3
Entertainment
Lindsay Lohan Teases Her Return To Film, 'Falling For Christmas'
Entertainment
A New Trailer Explores The Dark Side Of 'Barney'