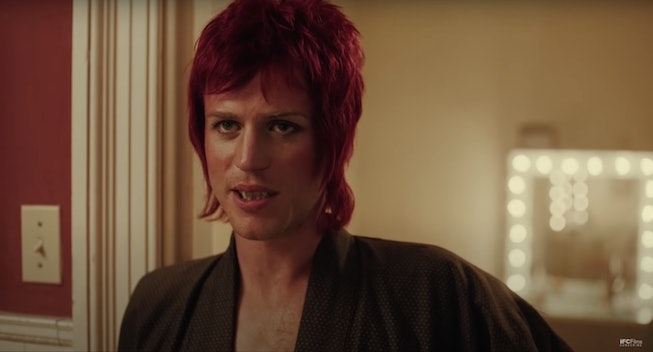 It's nearly been five years since the world lost David Bowie, one of its foremost cultural pioneers, but at least there's Stardust, the upcoming biopic about the internationally-renowned superstar's underrated 1970 album The Man Who Sold The World. The film, expected in theaters and on VOD on November 25th, received its first trailer Wednesday.

Directed by Gabriel Range, Stardust will hopefully peel back some of the artifice that defined Bowie's ever-evolving public image. The film's ambitious description asks, "Who was the man behind the many faces?" Judging by its trailer, Range focused on answering that question through telling a naturalistic story.

Like any biopic worth its space on your television screen (or, preferably on an actual movie theater screen, but we're in the middle of a pandemic), Stardust appears to pick up during a down moment in the illustrious musical icon's life. Its opening moment finds a label executive intoning, "Twelve singles, every one a total failure, except 'Space Oddity.' The record company finds the album too weird." The rest of the film follows the 24-year-old "fledgling" Bowie (Johnny Flynn) as he abandons his pregnant wife Angie (Jena Malone) to embark on a "makeshift coast-to-coast promotional tour" with "struggling Mercury Records publicist" Rob (Marc Maron).

The trailer also seems to hint that the film will delve into Bowie's queerness, an aspect of the celebrity's life that has unfortunately been ignored in many media pieces about his life. At another point during the trailer, as Bowie talks to a radio host about the inspirations behind his latest release, he describes The Man Who Sold The World as being "about the years I spent dressing in women's clothes and getting laid."

Watch the trailer for 'Stardust' below.