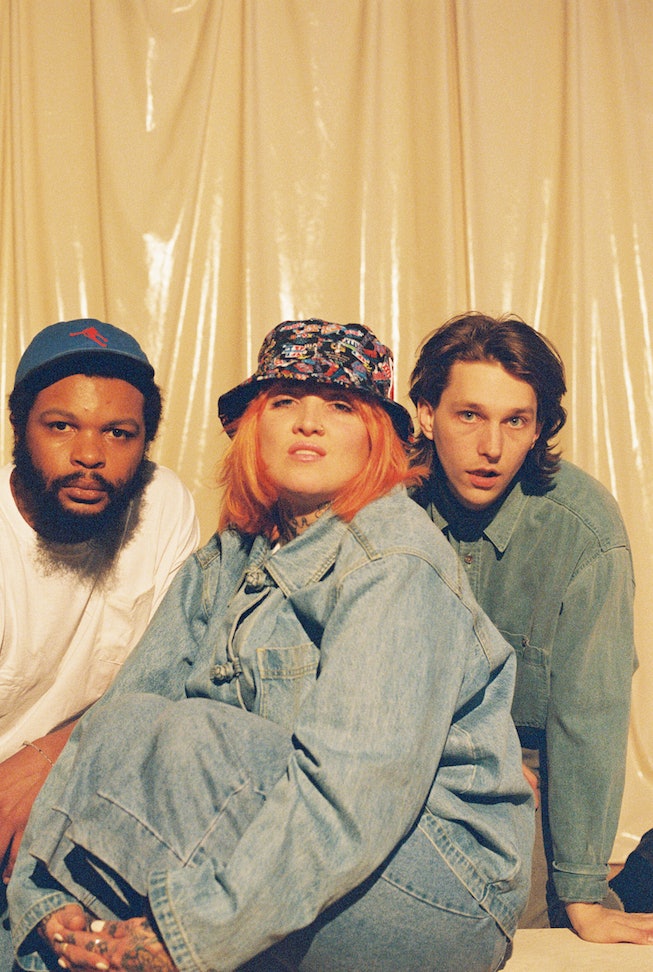 Chicago-based trio Dehd put out their excellent sophomore record Flower of Devotion back in July. The 13-track project — full of spry indie rock songs that tackle the big themes of solitude and desire, as well as smaller ones, like the dark comedy of falling in love with someone who doesn't love you back — was released to critical acclaim; Pitchfork named it Best New Music, while Variety called it "one of the most lively and inspired rock albums to come down the pike in recent memory." It's hardly an overstatement. The trio's distinctive charm stems from the sprawling and playful vocal gymnastics courtesy of singers Emily Kempf, and Jason Balla; they sneer, plead, growl and belt their way through their feelings and it's an audible treat. (Third member Eric McGrady accompanies on a spare drum set.)

On Thursday, the band shares their new video for "Haha," a highlight from the project and a harmonious, glittering rock tune about post-breakup love and heartache: "All I know is I love you/ All I know is cry, cry cry," Kempf wails on the hook. In the Kempf- and Ryan Hart-directed video, the song soundtracks the charming and odd activities of a boy scout troop, creeping through brush and snooping on lake swimmers. In an alternate universe, it could've made the darker cut of Wes Anderson's Moonrise Kingdom.

Of the video, Kempf writes in an email: "We had the idea when we were making the last video in Joshua Tree for 'Loner,' it sort of fell into our laps so to speak and we couldn’t wait to pick a song for it! Idea came first mostly riding on the back of Alex Grelle playing the male and female lead at same time, then we sorted the rest of story and the picked 'Haha' for it!" Watch below, and read on to learn a bit more about Dehd.

What are you all up to right now — describe your surroundings.

Emily: I am sitting in my bedroom looking out my big front window that sits over my bed and faces trees and sky and street, pondering getting my friend ben to make me some stain glass for it to block view from street and allow light to still pass through in a beautiful way. I just turned the heat on for first time this morning and harvested baby tomatoes and wildflowers from my backyard. An arrangement sits on my windowsill, yellows and pinks and violets and oranges. My puppy is under my bed napping, she especially likes it under there because it’s cooler and she has a lot of fluff. I will make breakfast soon.

JB: I'm sitting in the home studio that I've been building during quarantine. It's been one of my main projects the last few months. Lot's of time spent quietly building furniture and preamps trying to get this thing up and running. Total spaghetti pile of cables to my left waiting to be untangled.

It's been a few months since the release of 'Flower of Devotion.' How's it been processing its reception while also being unable to play live shows?

Emily: Honestly amazing. This time has been very grounding and positive for me. A lot of personal growth and personal slowing down, a lot of changing and settling in. A more solid focus on community care and being with my family and friends and in my home in one place. More stillness more creating more gratitude. Looking forward to playing live again but feeling patient about it.

JB: It's definitely a break from touring that I likely wouldn't have taken otherwise so having the time to develop a real sense of home has been great. Really miss playing shows that and it feels like we weren't quite able to put the cherry on top of this record without them. Honestly just proud to have still put it out and I think oddly it's been able to be a soundtrack to people's lives through a very weird and challenging time. I kinda like the idea that people might think of our record when looking at this year in the rear view.

How was the learning curve pivoting to livestreamed/recorded performances?

Emily: Obviously playing live is 100000000 times superior to livestreaming but we will take what we can get and adjust as we do! Maybe a lot of figuring out lighting and how to upload stuff lol.

JB: So much editing. It's definitely a total flip from playing live, but I've been having a lot more fun with it than I thought I would. I think it's really forced me to loosen up and have fun using social media. The weirdest part is watching yourself playing a show while it's happening. It's like you're both performer and audience. Freaky!

Dehd's videos all seem to have a thread of dark comedy running through, and this one is no exception. What's the appeal?

Emily: I had no idea I was making dark comedy but yes i suppose that’s a vibe for sure! Sometimes you just gotta laugh/cry about life you know? I think good comedy is born from someone being fully themselves and someone who’s experienced trauma or tragedy in some way. Someone who is good at being honest, intelligent, brave and perceptive. I feel we are good at these things as a band in our songwriting and video making. I think the appeal is simply that its all very relatable and entertaining!

JB: It's the weirdest thing about life for me that things can be two opposing things at the same damn time. We also try not to take ourselves too seriously so I think making something to go along with our music that makes you laugh just makes sense.