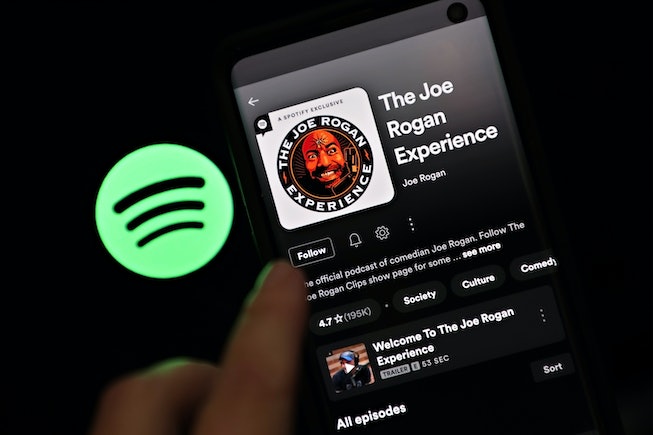 At this point, the flight of artists and musicians leaving Spotify is no longer a niche conversation.

Neil Young — who was the first to announce he’d be pulling his music off Spotify on Jan. 26 due to the “life-threatening Covid falsehoods found in Spotify programming,” an indirect reference to Joe Rogan’s controversial, Spotify-exclusive podcast — has since inspired a host of other musicians to follow suit, including Joni Mitchell, Nils Lofgren, Graham Nash, and India Arie. Rock band Belly, Eve 6, and other musicians have added their voices to the protest, urging fans to delete the streaming service. The topic has also renewed the discussion of Spotify’s paltry artist payment rates with new think-pieces, and has even compelled the White House to chime in on the subject. (Spotify’s CEO has since responded to the hullabaloo by announcing new content advisories they’ll be adding to Covid-related podcast episodes.)

Yet one detail that’s continuously been pointed out is how all of this is still unlikely to ultimately hurt Spotify’s bottom line. Young himself even admits in his letter announcing his departure that his streams from Spotify make up 60 percent of his global streams, making his choice one that’ll inevitably put a bigger dent in his wallet than the streaming platform’s. It’s inevitable all other artists leaving the platform faces the same sort of lose-lose situation, too.

But not all hope is lost, and as a music consumer, you too can have a hand in changing the way the cards have been dealt in this situation, even if in a minuscule way. Since Young’s announcement, #CancelSpotify has trended on Twitter and tech blogs all over are writing explainers on how to delete your Spotify account. While that isn’t the solution for everyone, there are still other ways to support the artists leaving and protesting the platform. Read on for all the ways how.

Jumping ship from Spotify is the overwhelming message that’s emerged from the current protests. If that’s an option for you, you’ll likely be posed with the question of what streaming service to go to next. Here are our recommendations for which streaming platforms to consider.

When it comes to streaming royalty rates, Tidal’s royalty rates are among the highest, averaging around $0.01284 per stream in comparison to Spotify’s often reported $0.003 - $0.004 per stream. While royalty rates weren’t initially part of Young’s decision to leave Spotify, it’s impossible to disentangle the current situation from money, as money is what’s ultimately keeping Joe Rogan on Spotify’s platform.

Notably, Tidal’s highest paid tier, HiFi Plus ($19.99/month), allows listeners to allocate part of their monthly subscription payment directly to their most-loved artists, with up to 10 percent going to their most-streamed artist. It’s their version of a user-centric payment system, which, instead of having your monthly subscription payment pooled and then doled out to the apps’ biggest artists regardless of whether you listen to them — splits your money to the artists you listen to the most.

Finally, Tidal is one of the select streaming services offering higher audio quality depending on your subscription tier, with the highest tier offering “Master Quality Authenticated” audio. (Another bone Young picked with Spotify in his letter writing: “Spotify continues to peddle the lowest quality in music reproduction.”)

Napster also has impressive royalty payment rates at $0.01 per stream. For $9.99/month or $14.99/month for the family plan, you can access the platform’s millions of songs and listen to music offline.

This is obviously the most direct route to support the artists leaving Spotify and any artist you love in general. It’s well known that streaming is only a small percentage of an artist’s holistic income, with album sales and merch sales — alongside touring — making up the biggest portions.

If you’re wondering where the best place is to buy their music, Bandcamp is always a great option, especially if you can pair the release on a Bandcamp Friday when artists are able to receive 100 percent of their sales on the platform.

Support their other endeavors

Shortly after leaving Spotify, Neil Young’s exclusive radio station on SiriusXM has returned for a limited time. It’s likely as other artists make their departures, they’ll be embarking in similar exclusive campaigns to help cushion the impact of their departure, so make sure you’re following Mitchell, Young, Arie, and more on social media to stay up-to-date.