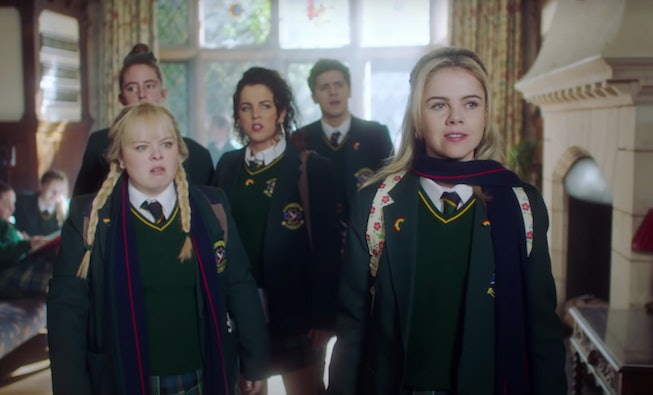 After three long years, the Derry girls are back. Season 3 of the beloved show — starring Bridgerton’s Nicola Mary Coughlan — is making its return to the streamer this year. Netflix announced that the series will return for its final season on Friday, October 7th.

Derry Girls is a coming-of-age comedy written by Lisa Gee that is based in Derry, Ireland. Per the synopsis, the show follows 16-year-old Erin and her group of friends “as they grow up in a world of armed police in armored Land Rovers and British Army check-points in the 1990s of Northern Ireland.”

Though the series is set during a particularly tumultuous time period — marked by violence and political conflict — Derry Girls provides a lighthearted look at adolescence in the midst of upheaval. Season 2 ended with Erin, Orla, Clare, Michelle, and James dancing gleefully around their school while, unbeknownst to them, a fatal bombing struck nearby. The drastic parallels between the two only further shine a light on how life unfolds in the midst of tragedy.

The trailer for Season 3 of Derry Girls, released on Thursday, shows Erin and the gang back at Our Lady Immaculate College for another year. The secondary school is based on the real-life Thornhill College that Gee attended in her youth. Despite the difference in time period, the high schoolers' all-too-familiar struggles are riddled in nostalgia.

Sometimes the girls are just trying to pass their classes, in other moments they are navigating their first relationships, or hilariously bringing their cousin's diary to school for their “book report.” That’s just the life of a Derry girl — it’s ever-changing, awkward, funny, stressful, and always heartwarming.

The premiere date for the final season of Derry Girls has not been released. In the meantime, you can catch up on previous episodes on Netflix, and watch the new trailer, below.