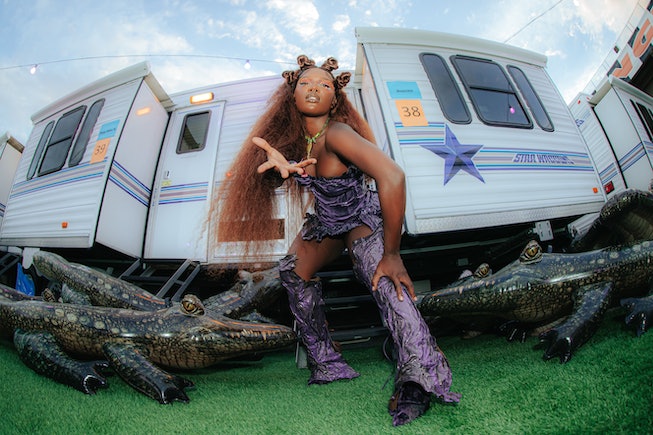 Doechii is having her moment. Since blowing up on TikTok in 2021, the rising rapper who came to fame through her deft viral anthem “Yucky Blucky Fruitcake” has had an ascendent year. Now signed to the prestigious hip-hop label TDE, which brought you Kendrick Lamar and SZA, she’s performed solo at the BET Music Awards, released an explosive debut EP, she / her / black bitch, and hit the road for her first string of festival appearances. She’s already proving herself to be a force to be reckoned with, and thanks to her explosive, expertly choreographed live performances that have likened comparisons to Nicki Minaj and Azealia Banks, it’s clear that Doechii’s talent goes far beyond the confines of a smartphone screen.

Recently, the rapper graced the stages of the long-standing alternative and electronic music festival HARD Summer, where she performed a fiery sundown set alongside a lineup of artists including Megan Thee Stallion, Lil Uzi Vert, Three 6 Mafia, and more. Ahead of her performance, she documented her time leading up to the show for NYLON: posing outside of her artist trailer in a purple two-piece “wet look,” hanging with her dancers, and wrangling her performance’s most important members: inflatable gators. The toy animals have become a staple in her sets, a callback to her Tampa, Florida upbringing that’s become something she’s reclaimed for herself. On Instagram, Doechii calls herself “Swamp Princess” — and she isn’t afraid of getting punnier than that, like “Queen Insti-gator.”

As Doechii’s star continues to rise, check out her candid, behind-the-scenes dispatches of her time at Hard Summer, below, capturing moments before she hit the stage for her dazzling performance.