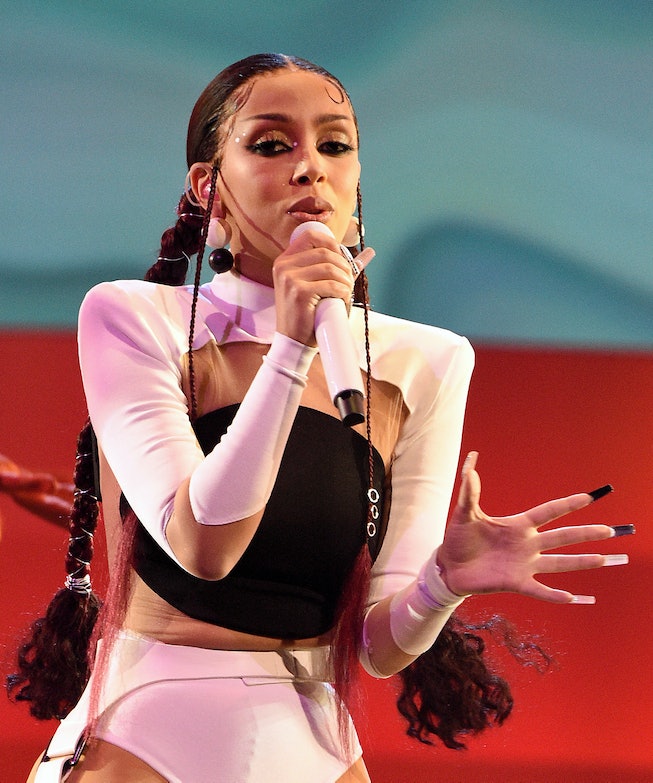 And in a flash another new music Friday is almost here: here are the 7 new albums worth paying attention to.

It’s the first official weekend of summer so naturally the current reigning song of the summer queen, Doja Cat, had to bless us all with her highly-anticipated new album Planet Her. The singer’s first new music since her 2019 viral record Hot Pink, Planet Her is expected to be one of the year’s must-hear projects. Especially if you consider the chart-topping power of her massive single “Kiss Me More” with SZA, a song that’s definitely made of drugs.

But that’s not all — eccentric rapper Tyler, the Creator also makes his return to music with his album Call Me If You Get Lost, a project that’s heavily steeped in Wes Anderston-esque aesthetics. Plus, there’s brilliant new music from Lucy Dacus, Atlanta singer-songwriter Faye Webster, and many more of our favorite musicians, below.

As Doja Cat’s first body of work since her 2019 break out album Hot Pink, Planet Her had a lot riding on it. And judging by the pop brilliance of the two singles already out, “Kiss Me More” and “Need To Know,” the pop star definitely delivered.

Tyler, The Creator, Call Me If You Get Lost

The enigmatic rapper is back with his first body of work since 2019’s critically-acclaimed Igor, and judging by its singles and vibrant Wes Anderson-esque visuals, Call Me If You Get Lost has Tyler reaching a higher level of his craft and expanding the ambitious scope of his vision.

In an interview with NYLON, Lucy Dacus said that her album Home Video deals with memory and nostalgia. “I think that like a concept album, nostalgia gets a bad rap,” she said. “And I think that that’s messed up because I think nostalgia is a good feeling. It’s a feeling of warmth.” That’s what you’re sure to also be left feeling after a spin of her new record.

Lightning Bug, A Color of the Sky

The New York-based band’s gorgeous folksy sound — which sounds exactly like what you’d want playing during the twilight hour appearance of the bug they’re named after — isn’t to be missed on their biggest album yet, A Color of the Sky. It’s just as good as the nature you’ve been craving.

The Bay Area musician’s new album isn’t only massive in sound, but also design: Spellling, aka artist Chrystia Cabral, recruited an orchestral ensemble of 31 musicians to help bring her ambitious, theatrical and fantasy-like musical universe to life on The Turning Wheel.

Mood Valiant is the twice Grammy-nominated and Melbourne-based band’s first album in six years. A project with that level of anticipation — Kehlani and Doja Cat consider themselves fans — will definitely deliver on the hype if it's groovy, immersive singles are any indication.

The 23-year-old Atlantan’s last album, Atlanta Millionaires Club, was met with critical acclaim praising Webster’s unique sound, a dizzying mix of bluesy country and soulful r&b. She builds upon that sound in her brightest album to date, I Know I’m Funny.

NEXT UP
The Art Issue 2022
From Renaissance To Gemini Rights: The Stories Behind 2022's Best Album Covers
Entertainment
Megan Thee Stallion Says A New Album & World Tour Is Coming In 2023
Entertainment
Everything We Know About SZA's New Album
Entertainment
Caroline Polachek Announces Album ‘Desire, I Want To Turn Into You’