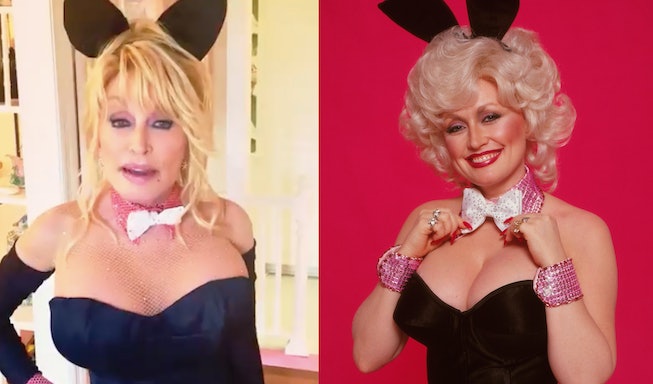 Dolly Parton celebrated the 79th birthday of her husband Carl Thomas Dean with a cheeky surprise. The country icon and former model recreated her 1978 Playboy cover for her man and shared the gift with her fans.

In a video uploaded to Twitter, Parton explained that she planned on doing the photoshoot for quite a while and saw this as the perfect opportunity. “Sometime back, I said I was going to pose on Playboy Magazine when I’m 75. Well I’m 75 and they don’t have a magazine anymore, but my husband always loved the original cover of Playboy so I was trying to think of something to do to make him happy.”

The original shoot took place in 1978, but Parton looks just as radiant now as she did back then. In the new version she’s wearing an identical bunny suit, with the iconic black ears and white bowtie. He still thinks I’m a hot chick after 57 years,” she joked in the video, “and I’m not going to try and talk him out of that.”

The elusive couple got married in 1966, and have been going strong ever since. In a profile for Oprah Magazine, she explained that they met at a laundromat in the summer, and had an instant connection. For their 50th wedding anniversary, Dean shared his first impression of Parton with Entertainment Tonight. “My first thought was I’m gonna marry that girl,” he said. “My second thought was, ‘Lord she’s good lookin.’ And that was the day my life began.”