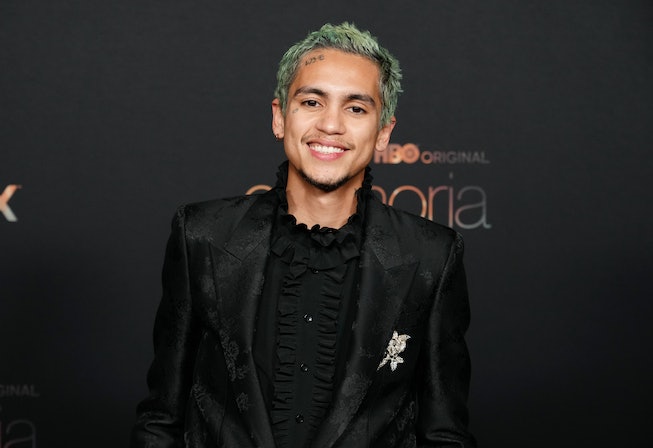 With the season finale of Euphoria’s second season quickly approaching, fans are already looking ahead to Season 3. Actor and musician Dominic Fike, who joined the HBO series for the first time this season as Elliot, the charming third leg of a Rue-Jules love triangle, has now confirmed that his character will definitely be returning.

Speaking to Jimmy Fallon on The Tonight Show, Fike said, “Absolutely,” when Fallon asked whether he’d be returning for Season 3.

He also indulged a few fan theories about the show, including whether his character Elliot could actually be the estranged brother of the villainous Nate (Jacob Elordi).

“I’m not even gonna lie — I saw this one online,” Fike said. “I looked at it for a while, and there were so many things connecting, and so many people were talking about it all through these Reddit threads. And at the end of it, I was like, ‘Am I Nate’s brother?'” He added, “I almost called him up and asked him.”

Fallon also asked whether Tom Holland, who is dating Zendaya, might make an appearance on the Season 2 finale following fan rumors that the Uncharted star had in fact already been secretly inserted into the background of the show. Fike said, “I knew I was gonna hear Tom’s name. What I can tell you is that Tom is a surprisingly nice guy for being Spider-Man. You know, because you assume, as Spider-Man, you can do whatever you want. You can walk into any room and just point at someone’s girlfriend.”

Instead, Fike said, “He doesn’t do that. He points at his girlfriend and kisses her on the mouth.”

Watch Fike’s full Fallon interview below, and catch the season two finale of Euphoria on HBO this Sunday, February 27th, at 9 p.m. EST:

NEXT UP
culture
Anna Delvey Is Getting A Reality TV Show
A Night Out
A Night Out With Rachel Bilson
Culture
Phoebe Dynevor Will Not Return for Bridgerton Season 3
Culture
Netflix Is Seriously Cracking Down On Sharing Passwords
Style + Culture, delivered straight to your inbox.