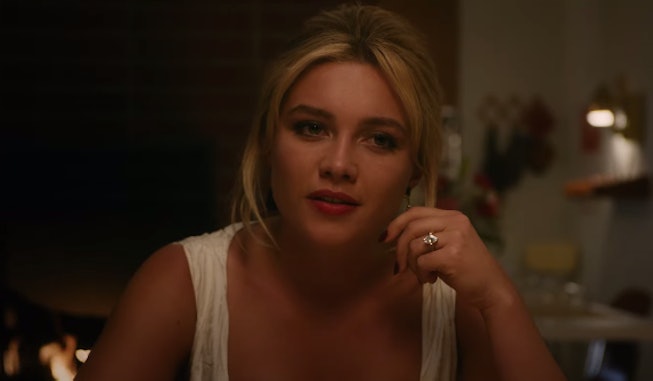 Olivia Wilde’s back in the director’s chair with her new film, Don’t Worry Darling. Following the success of her critically acclaimed comedy Booksmart, Wilde’s taking on a new genre, this time exploring the frightening life of a seemingly ordinary suburban couple in 1950s suburbia. The first full Don’t Worry Darling trailer dropped Monday, May 2nd, starring Harry Styles and Midsommar star Florence Pugh. From the looks of things it's shaping up to be a cautionary tale riddled with suspense, steamy make-outs, and, of course, fantastic costumes.

Keep reading for everything we know about Don’t Worry Darling:

The latest clip from the film, released Wednesday, September 14th features a scene with Florence Pugh and Harry Styles at dinner with other couples from their neighborhood. As the couples make exceedingly polite conversation, Pugh’s character zeros in on the impossible coincidences they all seem to share, from where the wives are from to how they all met their husbands in the same specific manner. As she accuses Chris Pine’s character, Frank, of “doing something” to them all, he gaslights her, accusing her of mental issues and telling her to take her doctor-prescribed medication.

The Don’t Worry Darling trailers are getting progressively creepier — as evidenced by the film’s second official teaser.

Dropped on Thursday, July 21st, the second trailer for Don’t Worry Darling shows Pugh slowly waking up to the disturbing realization that her perfect suburban life is not what it seems. In fact, it’s downright creepy, as images of Pugh wrapping her face in cellophane, being trapped behind glass and being prescribed pills for nightmares hint at a dark, cultish underbelly to the otherwise picture-perfect life she’s living with husband Harry Styles. Watch below:

Don’t Worry Darling’s first trailer shows a couple conditioned not to look below the surface of things.

According to the log-line, Don’t Worry Darling follows a charming 1950s couple who are happy as long as they don’t question things around them. Pugh plays an idyllic housewife living with her dashing husband (Styles) in a utopian experimental community. But their picturesque life begins to unravel, with the suspicion that their glamorous friends are hiding disturbing secrets.

Harry Styles and Florence Pugh are joined by an impressive cast of characters in Don’t Worry Darling. Crazy Rich Asians actress Gemma Chan is also starring in the film, along with Star Trek’s Chris Pine, Big Mouth’s Nick Kroll, and Kiki Layne from If Beale Street Could Talk. Olivia Wilde reportedly appears in the film as well, playing a character named Mary.

Wilde was excited to cast Styles in Don’t Worry Darling.

Before nabbing the role of his girlfriend, Wilde was the “Watermelon Sugar” singer's casting director. In an interview with Vogue, she recalled being “blown-away” by his performance as a young soldier in the 2017 war-flick, Dunkirk. That, coupled with the singer’s affinity for playing dress up, convinced Wilde he would be the perfect lead for her film.

She and her costume director, Adrianne Phillips, “did a little victory dance” when they learned that Styles was officially onboard. “We knew that he had a real appreciation for fashion and style. And this movie is incredibly stylistic. It’s very heightened and opulent, and I’m really grateful that he is so enthusiastic about that element of the process,” she said.

Despite production delays, the thriller is scheduled to hit the big screen on September 23, 2022.