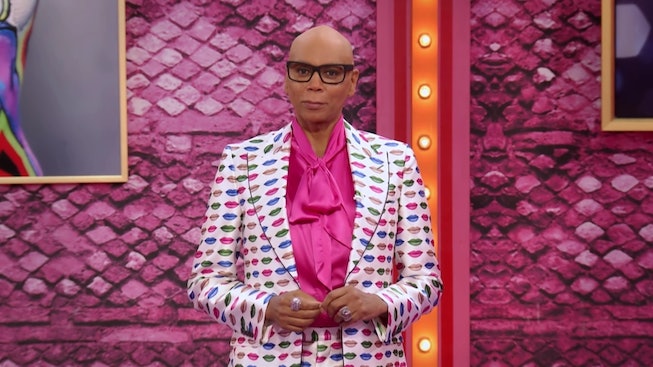 Back in 2018, RuPaul told The Guardian that he didn't really support cisgender women or trans queens competing on his flagship VH1 series RuPaul's Drag Race because, as he explained, "Drag loses its sense of danger and its sense of irony once it’s not men doing it, because at its core it’s a social statement and a big f-you to male-dominated culture." The reality host was immediately criticized by many in the LGBTQ+ community, with numerous calls to 'cancel' him. Of course, RuPaul hasn't really been canceled (he just won an Outstanding Host Emmy for the fifth year in a row), but discussion about Drag Race's gatekeeping has never died down. And now, the discourse might finally be paying off as two of Drag Race's chief creators hinted that trans performers and drag kings might be able to compete on future seasons of the Emmy-winning series.

Back in May, Drag Race executive producers Fenton Bailey and Randy Barbato spoke with Digital Spy about the future of Drag Race — which, in the last few months, has expanded to include new international versions of the beloved competition series (Canada's Drag Race ended last month; Drag Race Holland is currently airing) and some completely new ventures for the franchise (namely Drag Race: Vegas Revue, a Real Housewives-style reality series that followed six Ru-girls as they prepared for the Vegas Strip opening of RuPaul's Drag Race LIVE!).

Most of Bailey and Barbato's answers concerned the continued expansion of their global footprint — primarily through the smaller series that air on their worldwide streaming service WOWPresents Plus — and when asked whether they'd consider "including drag kings and trans talent in future iterations of Drag Race," the producers gave a somewhat promising answer. "Yeah. Our constant mantra is 'Charisma, Uniqueness, Nerve, and Talent,' and that does not exclude anyone," Fenton Bailey responded. Randy Barbato chimed in to clarify, "And there's been trans people on the show. It is 'Charisma, Uniqueness, Nerve, and Talent,' so it would not be some headline-making news. For some people it would be, but yeah." (Past trans contestants have included Peppermint in season nine, Monica Beverly Hillz in season five, Gia Gunn on All Stars 4, and more.)

As for when we can expect to see more trans talent getting ready in the Werk Room (or even a drag king bringing some butch realness to the Main Stage runway), only time will tell. While answering the question, Bailey gave himself an easy out by saying, "I mean, obviously we can't reveal future casts. So until then, all will be revealed." But if the World of Wonder founder is a man of his word, we can hopefully look forward to seeing more diverse casts sometime in the very near future. Last month, Variety reported that the thirteenth season of Drag Race had already wrapped filming (yes, with COVID safety regulations in full effect) and that production had begun on "one of the franchise’s spin-off titles" (most likely All Stars 6, which former contestant Phi Phi O'Hara confirmed was starting to film imminently).

It's clear the Drag Race ship has not stopped sailing. Let's hope the casting is getting a long-awaited rewrite.