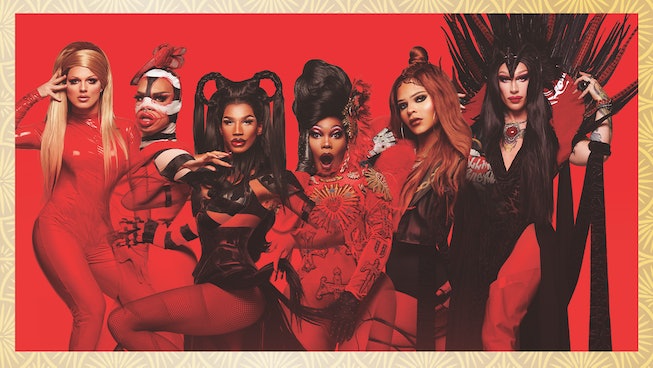 “I’m known for being the instigator and the shit-stirrer,” says Naomi Smalls at the top of every episode of RuPaul’s Drag Race: Vegas Revue. It’s the kind of declaratory statement that would make perfect sense as a tagline for any of the Real Housewives franchises — direct, clear, indicative of what’s to come. But for the Drag Race season 8 and All Stars season 4 finalist, that’s not exactly what it was meant to be. “I was talking more about my siblings,” she tells me over the phone a day before the finale of the VH1 series is scheduled to air. “I was the middle child so I was always teasing my older and younger siblings. I’m a shit-stirrer in that way.”

Regardless of her intentions, though, a tagline is what the producers behind Vegas Revue wanted Naomi’s statement to be — and luckily, she doesn’t harbor any negative feelings about it. “I honestly wish we had the whole Housewives mantra...like a real tagline,” she stresses shortly after. “But I guess [the sentiment] really transferred over to the season anyway, because I ended up asking some hard-hitting questions and these girls could not handle it!”

Airing every Friday on VH1 for the past six weeks, Vegas Revue has been an exciting new leap for the larger Drag Race universe, which already included international versions of the Emmy-winning competition series in countries like Canada, Holland, Thailand, and the U.K. Billed as a behind-the-scenes docuseries about the creation of RuPaul’s Drag Race LIVE!, a Las Vegas residency drag musical featuring six Ru-Girls, the resulting series was a welcome surprise for anyone expecting it to have anything in common with the widely-watched show that bore its name. A more fully-formed vision of Werq the World (the WOWPresents Plus series that follows Drag Race queens backstage as they tour the world), Vegas Revue could just have easily been called Real Housewives: Drag Edition and no one would have thought twice.

“Girl, that’s exactly what I thought of when they pitched it,” recalls Yvie Oddly when I bring up the similarities between Vegas Revue and Real Housewives. “They were like, ‘Yeah, you guys are going to be filmed in Vegas.’ And I was like, ‘Sweet, I’m going to be fighting with these bitches all the time while holding a martini glass! I’m going to stick my tongue down half of their men’s throats!’” Naomi’s reference point was slightly different, but it’s clear she had the same thought. “I found out it was going to be on VH1, so I was like, ‘This is going to be like Love and Hip-Hop,’” she jokes after noting that she and the other queens signed on to do the Vegas Strip residency before anyone knew there would be a television show accompaniment.

Regardless of your reality TV allegiances, for those who like drag queens and petty drama, Vegas Revue has easily become one of the most exciting new shows to hit our TV screens this year. While RuPaul’s Drag Race is already well-known for supplying an endless supply of on-set drama, there’s something uniquely refreshing about this set-up, which traded in the competition framework for something much more free-wheeling. When the six participating queens — which, in addition to Naomi and Yvie, also includes Derrick Barry, Vanessa Vanjie Mateo, Kameron Michaels, and Asia O’Hara — weren’t rehearsing, they were skipping across Las Vegas, getting lap-dances in bars, sharing meals at restaurants, and going on impromptu dates. The series offered an unprecedented peek into the real lives of these queens, diving far deeper into the personal realm than would even be possible on a regular season of Drag Race.

Seeing these queens examined under this particular microscope is fascinating, especially for someone like Derrick Barry. While many people misunderstood the Britney Spears impersonator during Drag Race season 8 and All Stars season 5, Derrick’s penchant for drama proves a boon on Vegas Revue; here, she is the consummate reality TV star. Like Naomi, Derrick is unafraid of stirring the pot, and as a member of a fully-committed throuple, she went into the season with a storyline many would already be curious about. Sure, she’s been in the relationship since her first stint on Drag Race, but given that Derrick and her boyfriends permanently reside in Vegas, the triad gets a special focus here. In the earliest episodes, one of her two partners (fellow drag queen Nebraska Thunderfuck) butts heads with Naomi, causing a temporary tiff between Naomi and Derrick. Shortly after, she incites a dispute between Asia and Naomi after disclosing information that was told to her in confidence. Even when Derrick is trying to be nice, she can’t help but make drama. While playing matchmaker for Vanjie, she ultimately leaves the season 10 and season 11 queen by herself on a painfully awkward blind date. “I call Derrick the Ramona Singer [of Vegas Revue],” Naomi tells me during our call. “She’s just made to be on camera.”

It wouldn’t be surprising if everyone else paled in comparison to the constant source of drama that is Derrick Barry. But fortunately, all six queens held their own. Even season 10 muscle hunk Kameron Michaels, easily the least opinionated in the cast, got a worthy spotlight when he brought his New York-based boyfriend to the top of the “Eiffel Tower.” Rather than being the grand romantic gesture he intended, the visit ended with Kameron being dumped on camera, as his boyfriend admitted that the distance between them is too much now that Kameron had relocated thousands of miles across the country to Vegas. Their breakup prompted interesting questions about the viability of love and romance when your job requires you to constantly be in new places, while also sparking a later-season storyline, when Kameron and Vanjie realize they want the same things in a relationship — and also happen to be on the same career trajectory.

Yvie Oddly, meanwhile, spent a majority of the season on her own. While other queens were bickering, Yvie, the self-described “odd duck out” of the cast, used her time in Vegas to kick off her rap career, visiting local burlesque clubs and employing the dancers to teach her about being sexy, something the season 11 winner (who describes her drag persona as an “asexual being”) admits doesn’t come naturally. Or as she puts it to me, “Everyone's fighting about whose boyfriend said whose wig-line looks like what and I'm just partying with some burlesque girls.”

Still, the beating heart of this season, the storyline that will inevitably outlast these six episodes, is the strained relationships between Asia O’Hara and just about everyone else in the cast. From the middle of the season on, a lot of time is spent on the splintering friendship between Asia and Naomi, who started the season attached at the hip and ended barely on speaking terms. After a disastrous game of Truth or Dare, Asia, spurred on by the revelation that some people think her energy is “negative,” decided to separate herself from the larger group by moving out of the dressing room she shared with Naomi and Kameron. But as other queens tried to talk it out, Asia, who started the season as the cast’s resident den mother (the same role she occupied in Drag Race season 10), refused to do anything — until producers eventually intervened.

“Idle hands are the devil’s workshop,” Asia quotes to me when asked about her thoughts on how shows like this can impact real-world relationships. “Normally, when we're touring together or on Drag Race, all our time is spent working. We don't really have a lot of downtime. But while preparing for the residency, we were all living in the same place. We had some nights off and some days off,” she continued, hinting at the idea that being forced to spend too much time with certain people can inevitably expose some unpleasant truths.

Of course, such is the nature of reality TV.

But unlike Drag Race proper, the drama from Vegas Revue seems to have persisted beyond filming. On whether she’d be open to returning for another season, O’Hara admits, “To be honest with you, it would depend on the capacity that I was needed. I'm at a place in my life where I love spending time with people that I love spending time with. I’m somewhat past the point of forcing myself into situations that just don’t benefit me. I’m definitely enjoying the show, but I’m not gung-ho about just hanging out with people that I just don't want to hang out with.”

“I kind of hate the word ‘sisterhood’ because I don’t think everyone I work with is a sister,” Naomi tells me about her own thoughts on how reality TV drama can pour over into real life. “But there is a family dynamic in there. It’s like, you fight like that because you’re all so close, but you know you’re going to have to see them the next day, so you make-up fast or else it’s going to be awkward. But sometimes, you don’t make-up. Sometimes, it's something that carries on until current day. I think we all respect what we do, but some people are just coworkers.”

For what it’s worth, at least some of the queens are game for a second season. “It's another tool in my artistic arsenal,” Yvie Oddly responds when asked whether or not she’d come back for a second season if World of Wonder asked. “I don't really consume a whole lot of reality TV. I don't really care about that whole world. However, I do like the idea of getting to connect with people, showing them who I am, and maybe getting in a catfight or two along the way.”

Naomi Smalls, meanwhile, really just wants the opportunity to perform in the live stage show while the TV series is airing — something she missed out on this time since the residency was indefinitely postponed in response to the ongoing COVID-19 pandemic. “If that is a possibility, I’d absolutely love to do it because I just think it would have a completely different vibe,” she tells me.

Luckily for her, this doesn’t seem like a far-stretch. After a mini Zoom reunion between the cast (organized by Derrick Barry, of course), last Friday’s finale concluded with the celebratory reveal that RuPaul’s Drag Race LIVE! would be returning to the Vegas Strip in January 2021. If World of Wonder plans to bring a camera crew back to the Flamingo Hotel as the queens prepare for their post-pandemic relaunch — and let’s be real, they will — a second season could easily be in the cards. And with the rabid fanbase that has formed around this unexpected gem over the past month and a half, VH1 should feel confident knowing that fans are eager for more.

As Naomi says, “It would have a completely different hype.”