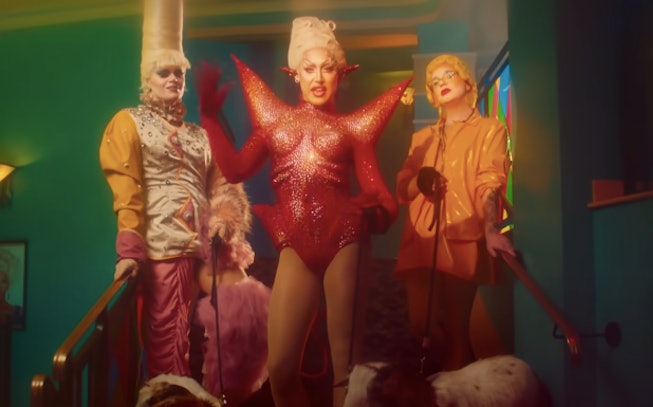 It's been less than a week since VH1 (as well as The CW, MTV, MTV2, PopTV, and LOGO) aired the New Year's Day premiere of RuPaul's Drag Race season 13, which unsurprisingly broke records as the most-watched episode in Drag Race herstory. But the nonstop workhorses that comprise World of Wonder are already teasing fans with more drag in the form of Drag Race UK. After airing its debut season at the tail-end of 2019, the British edition of the franchise took 2020 off — all the better to shine a spotlight on other international editions like Canada's Drag Race and Drag Race Holland. But now, it's 2021, and the only other Drag Race edition to boast RuPaul herself as chief judge is finally ready for round two.

In the first trailer for the upcoming season, which premieres in just over a week, RuPaul can be seen in a gorgeous gold cocktail dress, asking the very familiar question, "Hey sis, if you can't love yourself, how in the hell you gonna love somebody else?" The rest of the minute-long trailer offers a sneak peek of all twelve new UK-based queens as they show off their unique personalities in a rather chaotic-looking Werk Room.

"Never apologize for looking sickening," says one queen, dressed in a bedazzled red bodysuit with a bald head and blonde mohawk. Another, sporting a chest-revealing tangerine feather showgirl number, offers, "I'm a stallion, baby!" Then, there's the power shoulder-boasting blonde bombshell, who intones, "Fierceness isn't what you have. It's what you serve."

Even with all this, however, the real stars of this Drag Race UK trailer are the animals that join this fresh crop of Ru-Girls. At one point, a pack of impossibly adorable golden retriever puppies dash into the room, each one squealing in utter delight. Later, a glamorous horse neighs while a tartan-topped mechanical bull bucks its rider off its back. Still, nothing compares to the group of talking goats who add their own commentary throughout the clip. "Who says you shouldn't work with animals?" asks RuPaul, to which one of the goats gleefully adds, "Or drag queens!"

It's clear that we're in for a pretty crazy season indeed.