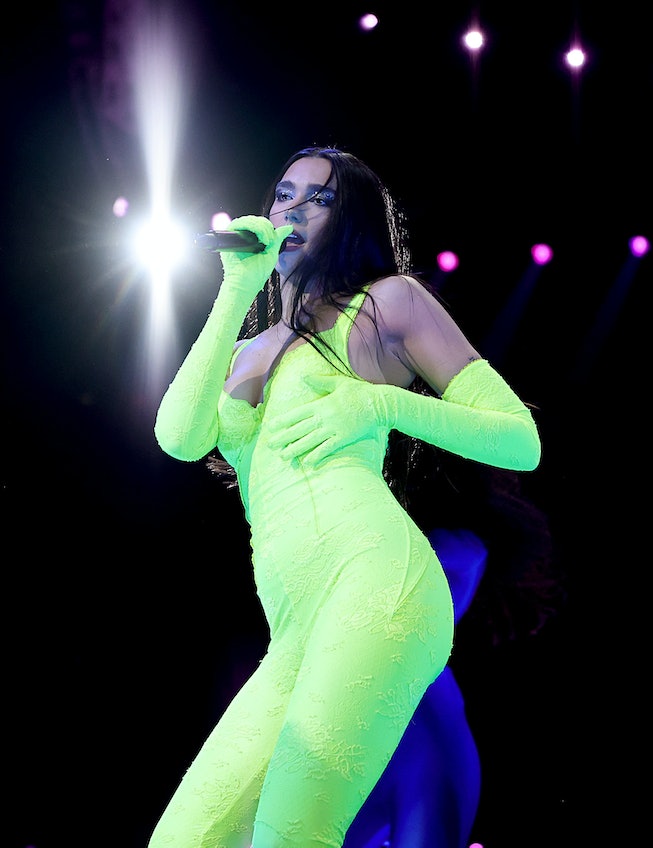 It was in 2019 when the internet's first general consensus around Dua Lipa was that she couldn’t dance. The criticisms stemmed from her reigning hit at the time “One Kiss” and the awkward hip-bobbing dance move that accompanied all her live performances of it. From there, the jokes quickly snowballed into other areas of her artistry, her lack of energy, lack of emotion, lack of stage presence. She was, after all, the one that inspired the now-legendary comment: “I love her lack of energy, go girl give us nothing!”

Flash-forward three years, and Dua Lipa is blasting all those claims out the water with her spectacular and long-awaited live show for her critically acclaimed behemoth, Future Nostalgia. If pressure can turn coal into diamonds, then pressure turned Lipa into a veritable powerhouse supernova star, one who can belt, dance, and gyrate it out — often all three at once — with the best of them.

Lipa was already a month deep into her tour when she made her stop at New York City’s Madison Square Garden on the evening of Tuesday, March 1, but there was no stale air about this performance. The maxed-out stadium buzzed with delight as the stage’s truly humongous semi-circle digital screen clicked on right at 9:15 p.m. playing a superhero-esque prelude intro-ing herself and her supporting cast of dancers — yeah, you better believe she got the budget.

She materialized on stage in a lime latex one-piece to kick off the show with “Physical,” complete with a gyrate-filled barre routine that stretched from one end of the stage to the other. The bright overhead lights seemed to cast a blinding, shimmering glow across everything that didn’t diffuse for the show’s entire nearly two-hour duration.

For all the comments and flack Lipa has caught for her lack of energy on stage, the girl never once seemed to stop moving throughout the show’s first part which encompasses an insane stretch of seven songs before her first fit change. She flitted about her dancers from the mainstage to the diamond jut-out and back again, belting all along the way. From the crowd, Lipa looked like a long, skinny, neon green bean, shimmying to an early-show rendition of “New Rules,” her dancers following her down the stage with iridescent umbrellas. Right before the song cut off, Lipa ditched the mic for her own solo dance break that maybe sounds corny but wasn’t at all. Throughout the show she’d have several moments like these, tossing away the mic to let her newly-honed dance skills emerge as if she had something to prove — which perhaps she did.

Five songs in, during “Pretty Please,” the neon movement of her costume effectively felt like mass hypnosis, every gyrate from her hips raising the crowd’s screaming by a decibel level. That’s the other thing we’ll hand to her and her crew: every movement, hair lip, smirk, smile, kick, whatever, was not anything if not meticulously, succinctly choreographed.

Perhaps, even, to a fault. Speaking with my friend after the show, we agreed that everything was executed so perfectly, so sharply that it all almost felt a bit sanitized. But, in retrospect, is that also not the impossible level of standards that a stadium-sized pop show demands?

There were certainly moments of goofiness and play, like the giant inflatable lobster that randomly bounces along on the stage as Lipa sang “We’re Good” during the second act of her show, donning a crystal-encrusted one-shoulder leotard. The set piece during that section advertised Dua Lipa’s “We’re Good” as a seafood dinner in the roller-skating ‘50s aesthetic, and even brought out two of her dancers on skates holding up platters of shirley temples and cosmos, miming like they were going to throw them into the crowd. It was here, when the show’s mission statement seemed to become clear, invoking an alternate dimension type of nostalgia, playfulness, and optimism that felt pure and like an antidote to all things bad.

Joy, euphoria and a brief moment of escapism — the same things Lipa herself seemed to hope to bestow to the world when she first released Future Nostalgia in the midst of the pandemic — was the end goal that was chased throughout all of the songs. In the show’s third act, a clubby and dance section, Lipa and her dancers crowded on the square jut-out for “Electricity,” her warm house anthem with Silk City. All together, squished on the small square-footage of space, they spazzed out as if we, the thousands in the audience, had walked in on them in the middle of a rave. With Lipa’s lyrics ringing throughout the stadium, “I know you been treating/ Treating yourself wrong/ So let me care for you,” it was permission to finally let go, release, and give in to the future nostalgia.