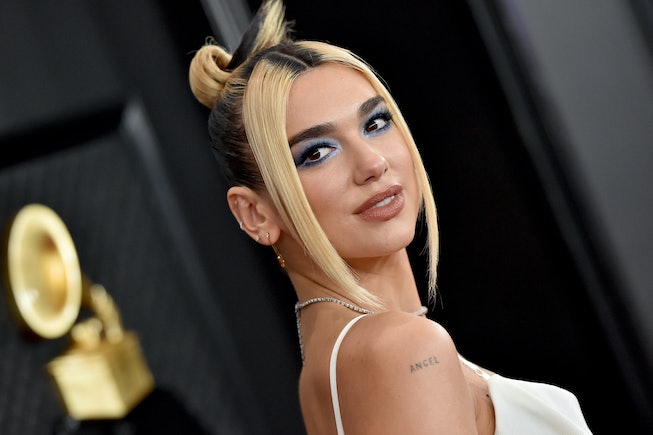 What do Madonna, Gwen Stefani, and Missy Elliott all have in common? Aside from creating many timeless classics, the other correct answer is that they have all recently collaborated with rising pop supreme Dua Lipa and will be featured on the upcoming remix album for her excellent sophomore album Future Nostalgia. We aren't ready!

Word about the upcoming collaborations first surfaced last week, when Dua announced the upcoming remix to “Levitating,” one of the standouts from Future Nostalgia. Remixed by The Blessed Madonna (formerly known as The Black Madonna), the newly reimagined track would also feature guest verses from both Madonna and Missy Elliott.

That announcement already felt like a fever dream itself. But things got even crazier when Madonna tweeted out her own announcement about the song yesterday evening. "Levitating Is Coming............. Dua Lipa, Missy Elliot and Myself!!" she said alongside some flame emojis. It was the image she attached that got everyone's attention — a collage that certainly resembled some kind of album cover, featuring herself, Missy Elliott and The Blessed Madonna. But there was something else, too. Mark Ronson and...is that Gwen Stefani?

The record was eventually set straight when Dua Lipa made the official announcement that she would be releasing an entire remix album, which is fittingly titled Club Future Nostalgia: The Remix Album. In addition to the aforementioned “Levitating” remix, the album will also include a Mark Ronson-remixed version of “Physical” featuring Gwen Stefani, as well as new remixes for all Future Nostalgia tracks “n then sum [sic].”

Club Future Nostalgia: The Remix Album comes out on August 21st, with Madonna, Missy Elliott, and The Blessed Madonna remix of “Levitating” dropping on August 14th. Prepare yourselves accordingly.

Check out Dua Lipa’s announcement below.