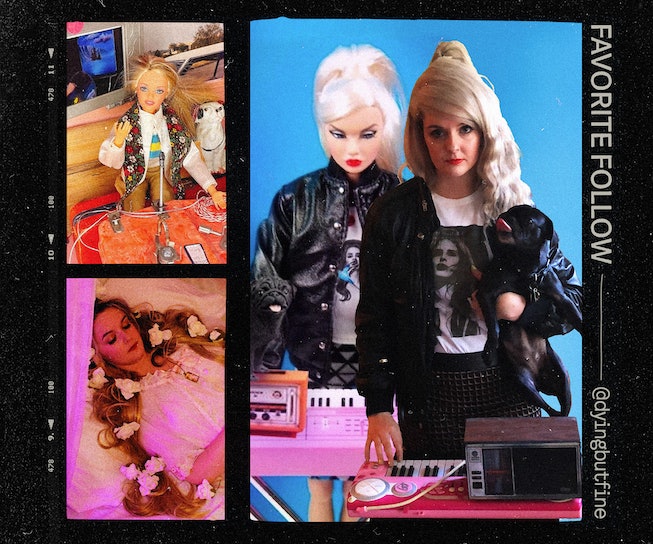 On the Instagram account @DyingButFine, Barbie is both the main character and a conduit for therapy. Images of the iconic doll in various locations, poses, outfits, and (sometimes silly) scenarios are accompanied by acerbic, at times nihilistic text engaging in the complex work of trauma recovery and daily living. Never trite and always real, @DyingButFine posts live up to their account’s name, capturing the complexity of the human experience by juxtaposing it against the absurd perfection of Barbie herself.

The account, which has 67,300 followers at the time of writing, is helmed by Toronto-based writer and artist Kristel Jax. Speaking over Zoom with her miniature pug popping up in the frame, Jax wears a pink dress that matches the aesthetic of her work, and speaks thoughtfully about the ways in which creating that ever-evolving artform, memes, has translated into a sense of community.

While @DyingButFine has been running since 2016, Barbie has had a recent resurgence in cultural visibility, from Greta Gerwig’s upcoming Barbie movie to the continued popularity of Barbiecore in fashion and online. In uncertain times, Barbie presents a projection of safety, unshakeable femininity and unattainable perfection that both provides an end point to long for and a form to compare oneself to. As someone who uses Barbie dioramas in her most popular work, Jax breaks down Barbie’s meaning, and why she thinks her sometimes bleak work translates to Barbie fans so well:

“There's a lot of fraught topics tied up with Barbie,” Jax says. “Beauty standards, consumerism, nostalgia. There's an appeal in imagining a Barbie who's more comfortable in existential contradictions....Barbie can act as a lightning rod for a lot of existential anxieties that her creators never intended.”

Below, Jax talks about the creation of @DyingButFine, why Barbie is such a useful visual metaphor and the delightful surprise of finding likeminded people online:

On @DyingButFine taking off, and what it means now:

I started the account in, I want to say, 2016, a long time ago. It used to be me with a couple friends, and then I just took it over pretty soon after that, so it's mostly been me. My friends and I had a group chat and we were commiserating over some stuff that we wouldn't really be comfortable maybe sharing publicly, and we started making memes just to share in there. Then we made a secret Instagram and didn't tell anyone, and that's what it was. It was pretty low key. It wasn't something that anyone was taking very seriously. We were just like, "Why are people following us? This is so sad." And I continued on using it as a place to vent after everyone else decided not to.

I'm trying to get away from being super self-deprecating, so I’m holding back from my natural inclination. The DBF account is weird territory for me; it's rewarding for me and has meaning for people, and I invest a lot of time and a lot of myself into it, but I also know how people use Instagram, like half paying attention to endless posts for split seconds totally knowing that Zuckerberg wants their brain in a vice. Plus it's not a job, I make a bit of money here and there but not enough to call it anything other than a hobby or compulsion. It's still a handy trauma recovery strategy for me, because I have a hard time expressing how I feel. Making memes and knowing people will see them often helps me process things in real time.

As the following has grown, I've also been buoyed by this feeling that I have a responsibility to really give my best. Like I feel connected to a lot of people and owe them a helpful narrative within all the chaos. Not to mention I wouldn't be able to afford therapy without my Patreon subscribers from the newsletter and everything, and a lot of those subscribers find out about me from Instagram. So I go back and forth on what the account means to me and where it fits into my life.

On the emergence of Barbiecore:

On the subject of Barbie being en vogue, I wanted to add that there's a world debut 7000 square foot Barbie exhibit in the Toronto suburbs right now. It looks really surreal, so I really want to go, but it's pretty far away and tickets are expensive so we'll see. I do genuinely feel drawn to it though, for me it seems like a good combination of extremely silly, suspiciously scam-y, and personally profound.

I think the Barbiecore aesthetic that's going on is cool. I love pink, femininity, and playing with kitsch and nostalgia, and the Barbie movie looks wild, but the account is definitely more like, for people who are looking for a scroungy, cursed Barbie. Like maybe a Barbie who goes to noise shows and lives in a leaky basement apartment cursing the day life emerged from the sea, but has some amazing wigs and cries when the moon looks nice. I imagine most people drawn to the account have some kind of (plastic) bone to pick with Barbie as a cultural institution.

There's a lot of fraught topics tied up with Barbie: beauty standards, consumerism, nostalgia. So there's an appeal in imagining a Barbie who's more comfortable in existential contradictions. Plus there's a lot of plastic in the ocean already and one commenter on DBF pointed out that a lot of this big branded exhibit is probably destined to end up there eventually. Barbie can act as a lightning rod for a lot of existential anxieties that her creators never intended.

Behind the inspiration for creating Barbie scenes:

I early on started mainly doing Barbie pictures, and I think there's an interplay between the nostalgia and the childhood memories versus adult-ish problems that resonates with people. Barbie's so loaded in cultural terms that it's easy for people to find something to latch on to. I am sourcing Barbies from everywhere, it's funny, if you take two or three words or a phrase and put it into Google, or Pinterest, or Instagram, you can find a Barbie for almost anything. If you look up ‘emo Barbie’ or ‘Barbie at the dentist,’ they've either made one or someone has done a custom. I am either sourcing directly from Mattel's 60-something years of marketing materials, or I'm sourcing from Dollstagram, which is people mainly on Instagram, sometimes Flickr and stuff, who are creating little scenes with their own dolls. Then I just credit them at the bottom. I don't tag them, I feel like that might be weird, because usually the content could be a little weird to get tagged in, if you know what I mean?

A few years ago, I was walking my dog and I saw an off-brand Barbie by Delta Airlines lying in the street. Sometimes people leave things out for other people to have, and I had my eye on it, but I was like, "No, a kid should have that," and then no one picked it up. I took a closer look and realized it came with a little classic radio, and I love radios, so I took it for myself. Now, some people have donated to me, and I've picked up some more, and have I think six. I started making stop motions with them and stuff. It really became a part of my day-to-day life, even though I was never particularly conscious that I was interested in Barbies, or the Barbie aesthetic.

On connecting with others through the Internet:

In interviews, I usually ramble more about how I'm a writer and musician and this account was a fluke. My friends and I were just big @gothshakira fans, and I had some time and a lot of angst. It was like an, ‘I'm here for a bad time not a long time’ sort of thing, that evolved as I worked through a bunch of personal stuff.

I felt like I was going crazy. I was having panic attacks, but I didn't know what panic attacks were. Just feeling really terrible. It was before there was much discussion about it publicly, so I had started doing my Drone Therapy series. It wasn't really a podcast, it was more just videos on YouTube, where I was really unhinged, I guess, going through workbooks from different therapy programs I was getting into. That had really shocked me, how many people had reached out and been like, "I'm struggling with this too." I’d had no idea. Going into the Instagram, I had some inkling that it might be helpful for people to have a humorous take, or a cathartic take, or something. But definitely I never expected it to be more than like 14 people.

In the beginning, I used to have a lot more direct contact with followers, and I think I also used to share things that were extremely personal. Whereas now, I have maybe more of a boundary, and I definitely have a thing where I want to make everyone else's problems into my own. People would tell me anything, which I think was more a sign of how desperately off kilter things are in the world versus how much of a good resource it seemed like I would be. But I definitely learned a lot about issues that I think are more in the mainstream consciousness now, about anxiety, and depression, and mental health, and the struggle.