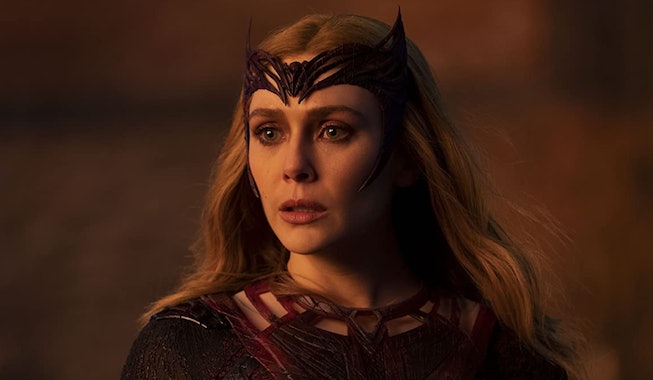 Spoilers below for Doctor Strange in the Multiverse of Madness.

Despite being one of the most super-powered individuals in the wider world of Marvel comics, it wasn’t until last year that Wanda Maximoff received her own solo story within Kevin Feige’s highly profitable Marvel Cinematic (and now, also Televised) Universe. That program, Disney+’s Emmy-winning WandaVision, delved deep into the tragic history of its namesake heroine, telling a story that adeptly explored the lingering pain of unaddressed trauma and mourning while also successfully laying the groundwork for her eventual evolution into the mighty, magic-wielding character fans of the comics will know as the Scarlet Witch.

The series also set up its titular character for her largest big-screen arc to date, which she finally gets in the recently released Doctor Strange sequel, Doctor Strange in the Multiverse of Madness. Alas, while WandaVision naturally presented Wanda as a sympathetic hero, Doctor Strange finds the very powerful, very dangerous individual relegated to the role of villain. Those who watched WandaVision will recall that the series concluded with Wanda fully embracing her Scarlet Witch alter-ego; Multiverse of Madness explores the dark side of this switch.

While Scarlet Witch has always been a pretty complex character — she wields her power from studying the Darkhold, a book dedicated to dark magic — some fans expressed surprise at just how Doctor Strange 2 treats her arc, particularly by setting her up as a mother willing to do just about anything (including murdering innocent civilians) to reconnect with her lost children. And for the first time since Multiverse of Madness’s unsurprisingly successful release last weekend, the actress behind the Scarlet Witch, Elizabeth Olsen, opened up to Variety about her thoughts on the film, some elements of which the actress claims she “had a hard time with.”

“I knew I was gonna be in Doctor Strange, but I thought I was gonna be, like, in an ensemble thing,” the actress recently said about the surprise she felt after finding out that her character would be the villain of the story. “So at first I think I was nervous and conflicted because I hadn’t finished WandaVision yet, but we were almost finished. And I was like, Oh my god, how do I make this all work together?” In the end, Olsen feels like having the show precede the film helped. “It became an amazing opportunity to have people be won over by this woman in WandaVision and feel for her, and then, you know, manipulate them into this film, where they get to be on her side and then feel conflicted themselves,” she said. “I thought that was a great opportunity.”

Still, Olsen felt like she had to make certain tweaks to make sure her character’s arc in Multiverse of Madness felt like a natural extension of the events that went on in WandaVision. “There were just beats that I felt like were almost too similar, as opposed to reflective,” she said, referring to both projects’ individual focus on how a woman grieves and responds to the loss of a loved one. “I just wanted everything to feel like some version of an advancement, even if the advancement is someone feeling a different reaction to pain and loss.” Noting that WandaVision itself stopped short of showing how its titular character actually reacts to the realization that her children are possibly gone forever, Olsen acknowledged that “the loss of [a] child would always be much harder than the loss of anyone else important in your life.”

Responding to a question about Wanda’s heel-turn and eventual murderous streak in the film, Olsen said, “I was also supposed to kill more. I had a hard time with it.” As she wrestled with what it means for Wanda to “[be] okay with ending [these human beings’] lives,” the actress noted that she “just had to buckle down and think all these people are in her way.” Explaining the justification she made for her character’s actions, Olsen said, “She’s warned Doctor Strange not to get in her way, and he did. He didn’t listen. And so I just had to go from that point-of-view.”

Regardless of her experience with Doctor Strange 2, Elizabeth Olsen seems eager to return to this character whenever she gets the chance. “It’s weird that I’m expecting to return but no one’s told me I’m doing anything. But in my mind, I’m just making the assumption that they’ll have me again,” she told Variety. “I don’t know to what capacity, but I hope I’m back. I hope there’s also more fun to be had in something different. Where do we go? I feel like we’ve done so much with [Wanda Maximoff/Scarlet Witch]. It’s been really a wild couple years with her.”

Watch the trailer for Doctor Strange in the Multiverse of Madness below.

Doctor Strange in the Multiverse of Madness is playing in theaters worldwide now.