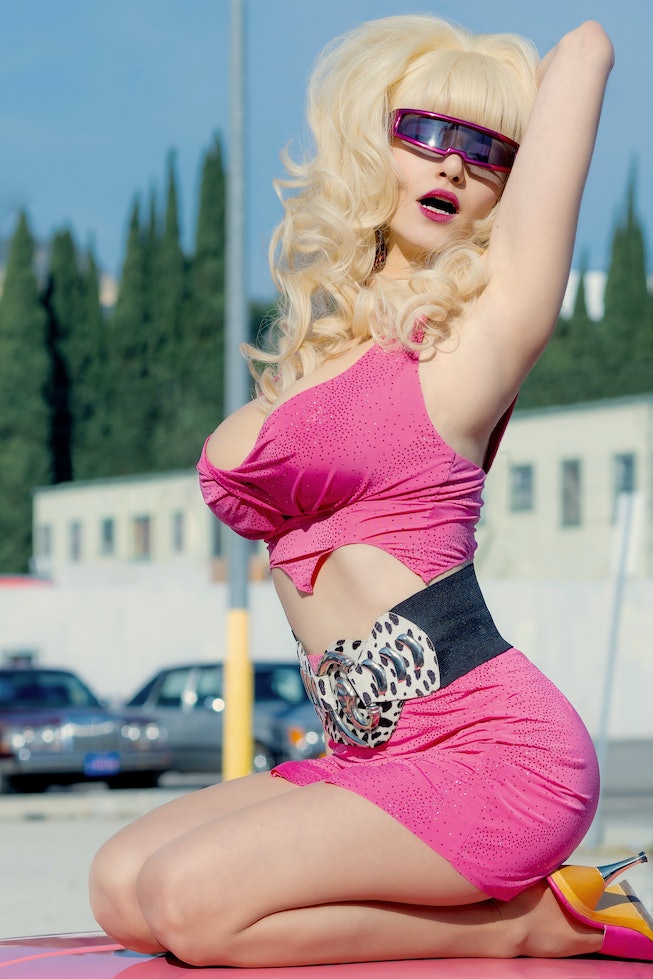 Have you ever heard of Angelyne, the billboard queen?

For the uninitiated, she is the first person to go viral before going viral was even a thing. A Hollywood anomaly, of sorts, Angelyne made a name for herself without ever explaining who she was. Instead of using a traditional media rollout, the singer posted a collection of scandalous billboards around Los Angeles in the early ‘80s that displayed her pin-up inspired figure, slick name, and nothing else.

Angelyne wanted to be famous, and in the end, she was, thanks to her mysterious campaign. But her ambitious plight came with a series of unexpected twists and turns — all of which serve as the plot to Peacock's new television series, Angelyne, starring Emmy Rossum.

The streamer released the first trailer for Angelyne this afternoon, giving everyone a sneak-peek at the wild series. In the first scene we see Rossum, dressed in Angelyne’s signature pink aesthetic, try to explain her billboard scheme to an advertising agent.

“What are you advertising?” he asks. “Myself, of course,” she responds. “Why not? Nobody’s ever done it, why not start now?”

Though it's a fictionalized retelling, Peacock's Angelyne reimagines the mystery model’s compelling journey for a new audience. “Angelyne is an homage to the Real Angelyne who became a cultural icon in Los Angeles,” said Allison Miller, the series showrunner and executive producer. “It’s not a straight forward biopic,” she continued. “It’s a story inspired by everything Angelyne represents and so it’s a magical story, a hopeful story, a story about becoming the person you were meant to be and believing in your inner strength to manifest your dreams. It’s a story about Los Angeles and everything the city means to people who move here and to people who dream about moving here.”

The new Peacock series premieres on Thursday, May 19th. Rossum, who both stars as Angelyne and executive produced the show, says her character is a bit of a fireball. “She’s as if Marilyn Monroe got into an easy bake oven with a 80s punk Barbie Doll, and a dose of a new age spirituality,” she explained. “She’s a trailblazer, a hustler, a visionary, the original influencer, a living-breathing piece of art.

Watch the trailer for the upcoming Angelyne, below.