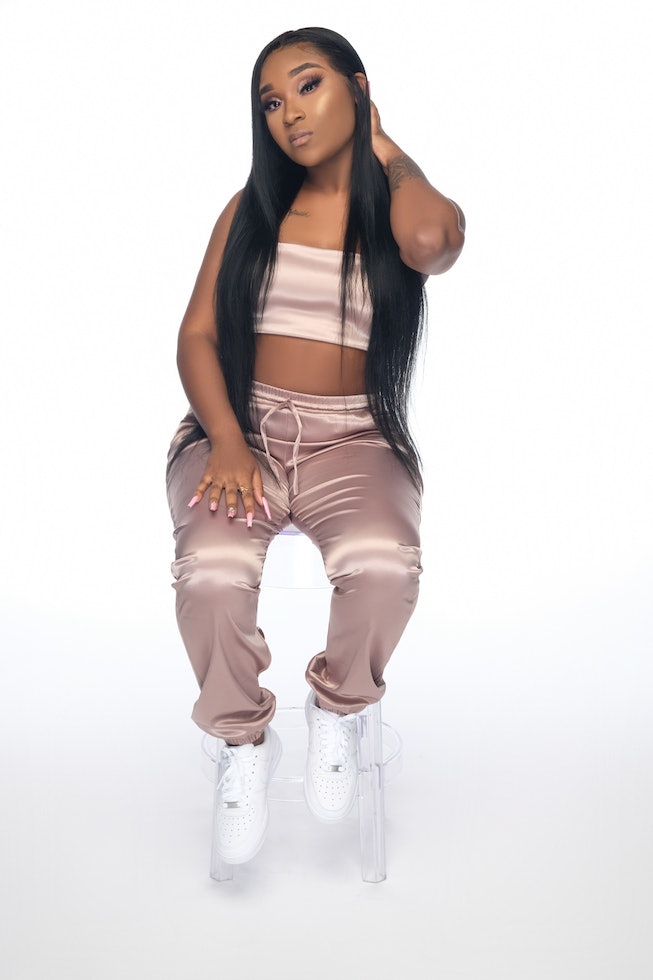 TikTok has emerged as an app that can make or break a song, whether it be a new release or potential hit that needed an extra boost of social buzz to build momentum. The latter has proved true for Erica Banks, a rising rapper out of Dallas, Texas determined to join the new era of female rappers breaking barriers in mainstream hip-hop. Her song “Buss It,” which samples Nelly’s iconic 2002 hit “Hot In Herre,” has been given new life with the TikTok #BussIt Challenge.

Sgt J, who produced “Buss It,” was going through beats in the studio like he normally would. "The Nelly sampled beat caught my attention so I choose that track and decided to write to it,” Banks tells NYLON.

The twerk-inducing song was initially released in June 2020 on Banks' self-titled mixtape. It was then promoted as a single, receiving an official video treatment, and debuting at No. 38 on the Mainstream R&B /Hip Hop Airplay chart in August and peaking at No. 36 according to Billboard chart archives.

Now, on Instagram, the hashtag has over 20,000 uploads. On Twitter a separate account was created by a fan, just to document the #BussItChallenge. TikTok, where the trend originated, counts over 200 million views on the hashtag, over 600,000 uses of the “Buss It” sound.

“It was a surreal moment watching it grow from platform to platform. I’m excited to see women having fun with it and now the guys are joining too,” Banks tells NYLON.

“Watching the women transform is the best part of the challenge and yes that’s something I relate to," she adds. "Today I may give you sneakerhead and tonight you’ll see me all glammed up.”

To complete the challenge, participants begin in a relaxed, sometimes messy state — sleep scarves or bonnets, pajamas, and an overall noticeable absence of styled hair and makeup mark the first half. As the original Nelly song fades into the background and the new Banks beat comes in, bass taking over, users drop into a flirtatious squat, hitting their best dance moves in a full, dressed-up transformation.

TikTok user @ErikaDavila120 created the sequence on New Years Day. Although she did not use the hashtag #BussItChallenge, she added text over her video asking users to draw inspiration and get “all prettied up.” Banks says she will always be grateful for the app.

“I’m thankful for any platform that provides exposure, especially one that emerging artists can benefit from as well. What the fans did with 'Buss It' on Tiktok will definitely be memorable for me," she says.

Other iterations of the challenge include people incorporating their children, switching up the squat to another pose, and adding other personal touches and flourishes to make the trend their own. Celebrities from rapper Rico Nasty to singer Monica have stepped up and added their swagger to the #BussitChallenge.

Since the challenge has reached beyond TikTok, taking over Instagram and Twitter timelines, “Buss It” has reached the iTunes top 10, alongside Banks' heavy-hitting industry peers Megan Thee Stallion and Cardi B with their record-breaking collaboration “WAP.”

Banks finally hopped in on the challenge herself, joined by fellow Dallas rapper Yella Beezy.

“Yella Beezy and I have a future collab that will be released soon, but we will have to wait and see who will be on the 'Buss It' remix — or remixes you never know,” Banks tells NYLON.

According to her official biography, the 22-year-old began writing poetry in adolescence and evolved to penning lyrics before initiating her rap career. “I’m inspired by several but I’ve always been inspired by the creativity of Missy Elliot and Nicki Minaj,” she told NYLON of her influences.

Banks not only kicked off 2021 with a viral hit, but also a new contract. The 1501 certified artist recently announced a new deal with Warner Records in partnership with her current label. She shared the news on Instagram, popping champagne with the firm declaration, “I’m just getting started.”

The “Do What I Like” rapper informed NYLON that with the growing attention, and cemented agreement, she hopes going forward to focus on “bigger visual production,” and “more collaborations.”

“No limits in 2021. I’m going to continue providing the fans with music they can dance and vibe to. I’m also looking to give them some surprises," she says.

See the original "Buss It" music video below or try out the challenge yourself — knees permitting.

NEXT UP
Fashion
How To Wear 2022’s Biggest Denim Trends, According To A Stylist
Fashion
Paloma Elsesser Launches First-Ever Plus-Size Collection With Miaou
Fashion
Rihanna Is Opening Savage X Fenty Stores In 2022 — UPDATE
Fashion
Behind The Scenes With Laura Harrier For The 2022 Met Gala