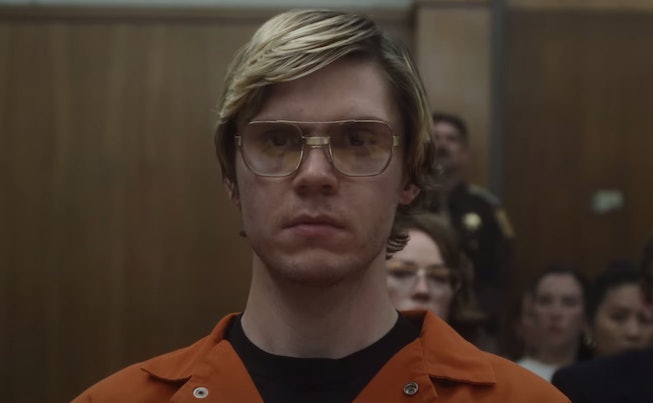 Ryan Murphy has turned his morbid sights on Jeffrey Dahmer, the serial killer known for murdering seventeen men and boys between 1978 and 1991. The first trailer for Netflix and Murphy’s Dahmer — Monster: The Jeffrey Dahmer Story debuted on Friday, with American Horror Story regular Evan Peters starring in the titular role.

The trailer begins with Dahmer luring a young man into his apartment — which the victim quickly notes has a rancid smell. Known as the Milwaukee Monster, Dahmer was known for engaging in necrophilia and cannibalism.

The pop culture fascination with serial killers has held strong amid the true crime boon; among the many films, podcasts, and TV shows about American serial killers, former Disney star Ross Lynch starred in the My Friend Dahmer biopic in 2017, and Netflix’s 2021 documentary about Ted Bundy (which followed 2019’s Zac Efron-starring Bundy biopic Extremely Wicked, Shockingly Evil and Vile) sparked conversations about the glorification of real violence, especially by white men.

For those who are fatigued by serial killer stories, Murphy hinted in an Instagram post that his show will be told from a different perspective — that of the victims. “Over the course of 10 powerful episodes, Dahmer shines a spotlight on the as-yet-untold stories of Dahmer's victims, the people who tried to stop him, and the systemic failures that enabled him to continue his murderous spree for over a decade," Murphy wrote. "Which is why we needed two trailers to properly showcase the complex story."

The first trailer also features Niecy Nash as Dahmer’s real-life suspicious neighbor, Glenda Cleveland, who confronts the killer and later screams at police, "I called y'all for months and it's too late!"

"The theme of this entire piece is timeless," Nash said in a video interview given to Netflix. "You still have people doing very bizarre things because they are either mentally ill, suffering some sort of trauma, managing or not managing their pain well. You also still have communities that are being underserved, being over-policed in the wrong way. You still have communities and people crying out for change and to be heard by the police and by the powers that be — and I say that specifically as it relates to the Glenda Cleveland portion of this story because hers is a story I did not know."