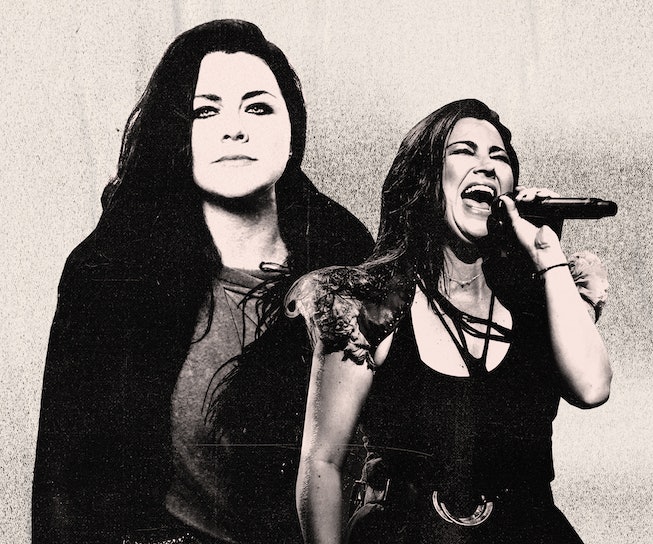 In the summer of 2003, you could not turn on a radio station anywhere in the world without hearing the tough screams and soulful soprano of Evanescence's "Bring Me to Life." The song, which was notably featured on that year's Daredevil soundtrack, charted in the Top 10 in more than 15 countries, and would go on to win Best Hard Rock Performance at the 46th Grammy Awards. It was — and remains to this day — the American rock band's biggest hit. But now, almost two decades later, Evanescence is back with a new single that is getting some of the band's best reviews yet.

Released in late April, "Wasted on You" is the first song off of the band's forthcoming album The Bitter Truth, their first record since 2011. Heavy on frontwoman Amy Lee's strong vocals, the song has been steadily climbing charts and getting critical praise, from the New York Times to Elle. The song comes out at strange time in the world, but Lee, who prefers communication via email, is still full steam ahead with more new music to come. Here, an email correspondence with the 38 year-old, who is now married with a son, from quarantine.

How are you doing? What does a typical day in quarantine look like for you right now?

Josh, my husband, gets up (way too early) with Jack while I sleep in almost every day. He’s awesome and I feel guilty about it but I just LOVE SLEEP and I can’t stop taking advantage. I pick out which PJ pants I’m gonna wear today and eat an avocado for breakfast. Jack and I make slime or do a science experiment of some kind, watch cartoons, and at some point I head into my studio to either write or do interviews or whatever. I usually make dinner, or we grill while Jack plays outside. Bath and bedtime for Jack, oftentimes I go back to the studio again to finish what I was doing and then I finally get to tend to my garden on Animal Crossing till I pass out on the couch.

Why was now the right time to release "Wasted on You"? Did you think about delaying it once the pandemic hit?

Well, the original plan was to release a different song, and yes, at first the thought was just to delay releasing that one or anything. As days went by and we realized how big of a deal the pandemic really was, and how long it might be before we could work “normally” again, we decided waiting indefinitely just wasn’t what we wanted. Life is too short. But the song we were going to release didn’t fit the moment anymore. So I thought about the songs we had finished already, and "Wasted on You" was coming from a place that really felt like what we were suddenly going through, so we went with that one first instead.

What has it been like to promote a new single during this time?

Super weird. I mean, I can run my Pro Tools rig and I can track a vocal by myself, but ask me to film myself in real-time over the internet with the proper tags and stuff and I just suck, man. Live Zoom interviews, performance streams, all the DIY tech I have to do for promo now is killing me. I mean, I stuck with cassettes a full five years after CDs became standard. As Erykah Badu put it, I’m an analog girl in a digital world!

The single has been getting great reviews — were you expecting this? What about the song do you think resonates so much right now?

That’s awesome. It’s made me really happy to see people excited about the new music. You know, I spend a lot of time thinking about songs I’m writing in terms of sound and vibe and letting that guide what happens lyrically to some degree. I’ve been making a new point of putting the meaning first lately. Making that the most important thing. Maybe it's working.

What was your mindset when you began writing this album?

It's going to be a journey. One of the songs we’ve recorded so far is from 10 years ago, from the first time we went in to record our third album. Completely reformed into a special new thing. Up to now, some of the songs are being written now, some aren’t even written yet. And so much has happened this year, there’s so much to say. So yes there are themes, but I think the biggest one is about time. Past, present, and future all at once. And part of that has to do with how the album is still a living, growing thing, as it is being slowly released. Like life.

How is what is going on in the world impacting the album's progress?

We are coming to a point where we really need to get together to get it done. So far that hasn’t been safely possible, so we have been working remotely, sending ideas to each other and I still have plenty of lyrics to write to songs that are otherwise ready to record. We are now starting to look at how and when we can get together. Beyond that it's hard to always be productive when things are such a mess. I’m worried for my family and anxious about the next school year for my son and wondering what the future holds for live music and touring. But I have found some real good in having the time to let creative thoughts form. Music video ideas, merch ideas, the album cover, lyrical concepts, so many things.

I’m honestly not sure what it’s ever meant. I’ve never been one to fit into any one box, musically or otherwise. But do I sing about sad shit? Yes. Do I like minor chords? Yes. Am I culturally cynical? Yes. But I also collect tiny plastic food and love Tenacious D and there’s a duck quacking on our second album just for fun. So….

It's been nearly 20 years since your first full-length album — how has the band evolved in those two decades?

I could write a book answering this question! So much has happened. Perspective is a powerful thing, it made me a better writer, it made me a more compassionate person. The experience of playing so many concerts, as a band, just makes you improve. And it gives you the confidence knowing you’re where you’re meant to be. Styles and inspirations change, and we’re always going to be trying new things, but we know who we are and aren’t going to lose that. The talent level of the guys (and other gal) in the band is so high, I’m lucky to have them. We all enjoy pushing ourselves (and each other) and we all dig being challenged.

How has taking breaks between records helped keep the creative process feeling fresh? What do you do during those times?

Taking on projects that let me be creative in different ways, and show different sides of myself make me feel empowered and inspired. I feel like the more I allow myself to follow through with creative urges, the more satisfied I feel and the less Evanescence feels like “the same old thing.” You gotta break it up to keep your head clear and to stay inspired I think. Also, you have to live life before you can sing about it. I have experienced a lot of things I never had before since we wrote an album.

What have been the most significant shifts that you've seen in the music industry over the past years? How has that affected the music you're making and how you are putting it out?

A big one is the shift of focus from albums to songs. The way we consume music now is so limitless, everything is a tap away. So we skip from song to song, feeling to feeling, short attention span, all that. I actually like it. We’re still making albums. I love making albums. But I don’t have to feel like I need to make an album just to release a song. I don’t need a reason. We can do whatever, whenever. Just like the listeners. And that’s awesome.