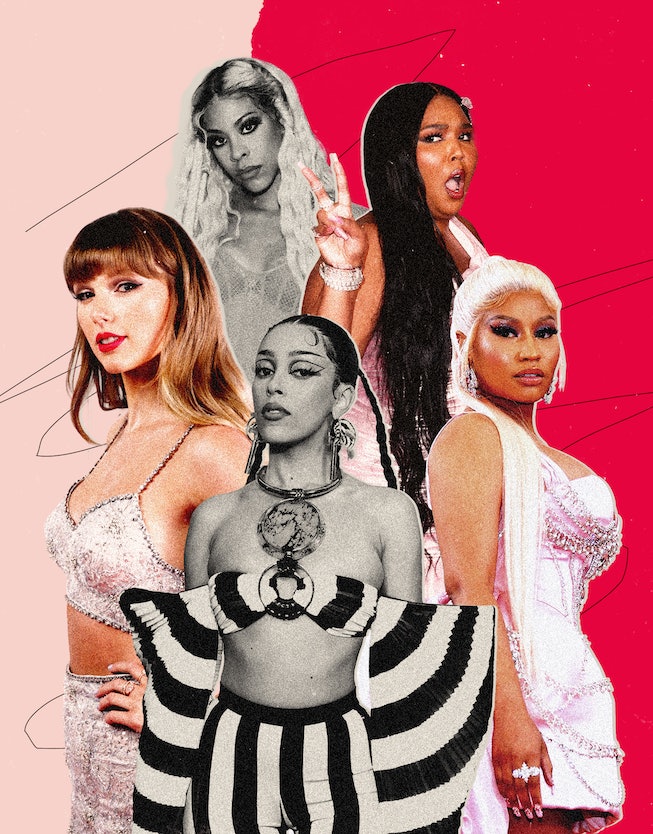 Following a celebrity on social media can bring you a pretty mixed bag. Though they were once imagined as a new way for artists to communicate and build relationships with their fans, most social media platforms have become simple promotional hubs for artists’ projects and not much else. And with various new ways celebrities can control who interacts with their posts, social media has easily become a one-way street.

Surprisingly, it feels less like this on TikTok, the micro-video app that gives the famous people who dare to be on it very little to hide behind. The platform has birthed a new generation of internet-savvy stars: Lizzo, Lil Nas X, Doja Cat, and many other musicians on TikTok are opening the doors of their private lives to the world. They’re in on the joke, and sometimes will be the joke; others, like Young Thug, are just surreal presences that make them simply worth the follow.

Below, we rounded up 13 famous musicians and celebrities who will actually enrich your FY page, from Doja Cat’s shitposts, to the extremely normal life content courtesy of Maggie Rogers. Well, are you not entertained?

Yes, the queen is on TikTok, and no, she doesn’t know how to use the app! Don’t worry though, she’s got a very noticeable cameraman shooting all her videos and glitching, eye color-changing filters to use when she needs to wish someone “very annoying and dumb and ugly” a happy birthday — all to the everlasting, ecstatic, and ebullient delight of the Barbs. (And us plebs, too.) Watching Nicki Minaj do anything — even if it’s her saying “hold awn” 10 times in that wonderful Queens accent — feels like a rare treat.

So you wanna know what an international pop star does all day? Look no further than Charli XCX’s TikTok, full of behind-the-scenes clips and her unfiltered opinions about pop music — like how Kylie Jenner would be an amazing pop star and her songs would sound exactly like Nicki Minaj’s “Super Bass.” Perhaps the best part of the U.K. star’s presence on TikTok is how much of a good sport she is when it comes to participating in the app’s various dance and sound trends and appeasing her well-meaning but occasionally deranged fanbase. Charli XCX is down for anything — even if it means dragging all major record labels for a joke.

As we’ve said here before on NYLON, Chlöe Bailey’s lockdown song covers deserve more attention, and we’re here to give it! The marvelous vocalist and half of the Beyoncé-mentored duo Chloe & Halle is not afraid to capital S Sing on the app, and some of her most mind-boggling vocal tricks are on display on TikTok — like this insane vocal run she decided to record at 4 a.m. because she couldn’t fall asleep. And lest we forget: Bailey’s somewhat of a trendsetter on the app, as a sultry dance video of hers from earlier this year was the sexy prototype that helped spawn the unforgettable #SilhouetteChallenge.

While we all love the voyeurism of decadence that comes from following pop stars on social media, one may also wonder: Are there any celebs just living a normal life? To which I respond: Please check out Maggie Rogers’ delightful TikTok. No flashy cars, expensive jewelry, cavernous mansions, or closets of designer clothes will be found here. Instead, Rogers is fooling around in Walgreens, bowling, or trying to catch food in her mouth while standing in an empty kitchen in her underwear — we’ve all been there. She’s also a big sharer of stories, including the funny one below. It’s all very charming, sweet, and normal! Watch too many and you may end up convincing yourself she’s become your friend.

Tinashe is a singer, songwriter, actor, and dancer, though on her TikTok, the latter takes center stage. After all, TikTok took off as the dancer’s app, and Tinashe’s excellence in that field is undeniable, whether she’s just joking around in a shitpost video or actually participating in (read: slaying) a dance challenge. There’s something about pop stardom that almost seems to counterintuitively flatten the scope of a person’s talents, but through the smaller, equalizing screen of TikTok, Tinashe’s genius blossoms in 3D.

The first time a Young Thug TikTok popped onto my FYP, I thought I was hallucinating. There he was, the trap king of Atlanta, standing in an ivory bathrobe and invoking his fans, or slimes, to do the #SkiChallenge: a new dance move for his song “Ski” that involved you swishing your arms from side-to-side, which he attempted to demonstrate poorly. At the time it only had a couple thousand likes and views, and the comment section was just as mystified by the surreality as I was (eventually, Drake helped him out and did the #SkiChallenge).

I’m happy to say that the rest of Young Thug’s TikToks are just as perplexing and strange: videos of him sleeping on a massive placard next to a teddy bear, randomly vibing (disassociating?) in the club, silently scratching his dreads, or waving around a misplaced stack of money that his maid found in his jeans. Like modern art, it’s OK if you don’t get it. In fact, it’s better if you don’t.

Following Rico Nasty on TikTok is like following the most popular girl in school. She’s gorgeous, tries her hand at all the trends, and also isn’t afraid to get weird. You’ll find videos of her showing off her glam right next to a bizarre, close-up shot of her back scrunched up in such a way it looks like an ass crack. These are all the shades of Rico, seemingly unfiltered. What more could you want?

There is a very friendly aura that emanates from Lil Yachty’s TikToks. We can’t put our finger on what exactly it is, but even when he’s telling his fans it’s weird that people take videos of him sleeping in public, it comes across as only very slightly perturbed. It’s what makes his videos — though overwhelmingly promotional and tied to sponsorships and advertising — worth watching. They’re not overly complicated or pandering, and more like he’s a distant friend who sometimes pops up on your FYP smelling flowers, showing off his shoe collection, and, occasionally, being horny on main. You smile at him when he’s on your screen, and then casually swipe on.

If drama and mess are what you’re looking for, then you’ve found your gal — and of course we say that in the most loving way possible. After all, the eccentric cult musician who was once pop culture’s favorite villain somehow endured so much hate that she’s back to being beloved once again. When she finally joined TikTok in April, thousands cheered at the prospect of witnessing Azealia Banks stir up trouble in 4K, a reaction she even acknowledged in one of her earliest posts (she called it “quite sad”). Though the Big Azealia Banks TikTok Beef has still yet to happen, and her posting is sporadic at best, the chaotic potential of her very presence on the app makes following a no-brainer. In the meantime, enjoy the other very Banksian content hosted on her page, like the below video of her fiercely cat-walking around her apartment in a huge gown, channeling Naomi Campbell.

Did you think we’d fail to include No. 1 internet troll and pop hitmaker Doja Cat on this list? Though the star has stepped back from the app these days, her legend and notoriety on TikTok still loom large. After all, her entire discography basically soundtracked the app for the past year and a half, and her actual videos are a different force altogether. Undaunted by the 12.5 million pairs of eyes watching her every move, Doja moves like the ruthless comedian she was even before she was famous. She’s not afraid to duet your video and mock your speaking voice, post unintelligible gibberish from her drafts, make fun of TikTok’s health-conscious video reminders, or just be generally chaotic. Beneath her videos, you’ll often find users praising how she’s one of the only celebs who actually “knows how to use the app.” Let that be the sole recommendation you need.

The ying to Azealia Banks’ yang, Grimes’ chaotic nature on TikTok stems not from any harbored ill will or malice, but from the sheer earnestness of everything she does. She sincerely defends Elon Musk in a video soundtracked to a “Twerkulator”/“PYT” mashup sound as she strokes a robotic dog and argues about the compatibility of A.I. technology and communism while fully zoomed in on her face and in full alien makeup. The chaos is her, which makes anything she does, even if it’s a simple TikTok trend, thoroughly, and naturally entertaining.

Ah, Lil Nas X, the star born from the internet (and specifically TikTok), where “Old Town Road” first went viral. With nearly 20 million followers, his presence on the app feels integral to the experience. His songs have fueled countless challenges and trends — several came out of “Montero (Call Me by Your Name)” alone — and his savvy use of the app has added new dimensions to the artist and fan relationship. Most of the time, he finds clever ways of responding to fan criticism and commentary, often gleefully accepting whatever role the public deigns to put him in and subverting the original critique. These days his TikToks are mostly promotional but occasionally a video will pop up showcasing the wit and deftness he’s known for. Those are worth it.

Lizzo is Very Online. If you’re looking for an active celebrity to follow, you’ve found the one. She posts multiple times a day, and unlike the old adage “quality over quantity,” her quantity is pretty quality! Expect a lot of wacky, sometimes shocking, duets with other creators, and quietly hilarious videos where she mocks conservative public opinions about her. Like this recent one, in which she filmed the many phallic-shaped vegetables she “eats in a day,” including a straight-up raw eggplant.

Yes, Taylor Swift did just get on TikTok, but let’s be real: the pop star doesn’t ever do anything half-assedly, which means we’re likely in for some charming, maybe a tiny bit cringe-y but ultimately wholesome, and nice content. And look, she’s already started with her second video, in which she riffs on a meme of herself and her cat lady persona. Best to place her on your accounts to watch list.