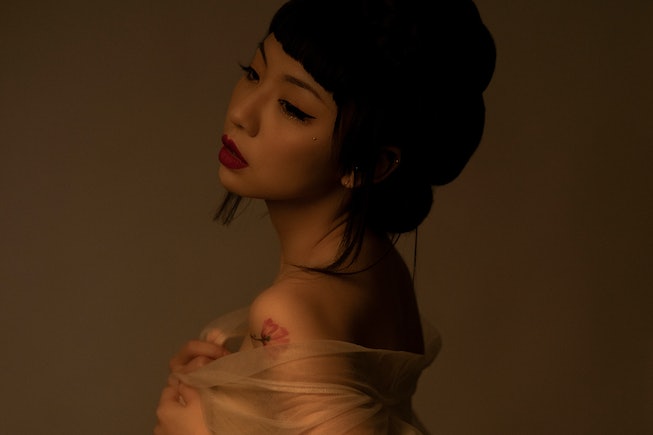 There’s a sense of enormity one feels while listening to Chinese-British singer Fifi Rong’s mystifying avant pop. The songs themselves aren’t big-sounding — more likely they’re soft and sensuous in sensation — but the air around them feels heavy with meaning, like happening upon an old diary from long ago in an attic.

On her recent song “Out Of Clock,” Rong’s songwriting is diaristic, as she sings about a string of unsuccessful relationships and how she’s running out of time to find love, a potentially tragic or good thing: “My life is running out of space for anyone to stay,” she sings. It’s a big question, one that could’ve only come out of lived experience, and you can hear it in the way she sings throughout the song and its greater album, There Is A Funeral In My Heart For Every Man I Loved, out on Friday, December 10.

“Just like me, culturally and musically, this double album has 50 percent in English and the other 50 percent in Chinese,” Rong told NYLON about the upcoming project, which was completely and independently crowdfunded via Indiegogo. “It’s a memoir of love that documents everything I’ve lived, and everyone I’ve loved in my life. I wrote about strengths in vulnerability. Our deepest hurt always teaches us the most important lessons.”

Below, NYLON exclusively premieres the music video of “Out Of Clock” early, which features some stunning footage of Rong wandering through blooming fields of wildflowers. Watch it, below, and read on for a conversation with Rong.

Multitasking 101 things in my studio, preparing for the album release.

When did you begin making and writing music?

About 12 years ago, when I realized my purpose in life is to create my own niche of music style, bringing my cultural heritage into Western popular music culture.

What inspired the concept behind There Is A Funeral In My Heart For Every Man I Loved?

I want this album to encapsulate a specific branch of melancholic romanticism that transcends its own context. It’s taken me five long years as I picked these album songs from over 100 demos. And I had to make sure each demo was hitting me emotionally from the demo stage to the finishing stage. Production-wise, I’ve taken an extremely feminine, delicate, and vocal-led approach because for one, that’s my corner female producer and what I do best, and two, I was inspired by a Peruvian Shaman during an ayahuasca retreat in 2019. That’s when I realized the raw vocal coming from the soul is the most intimate, vulnerable, yet powerful instrument there is.

You crowdfunded the entirety of this project, did you think that would be possible before you started the process?

Yes, but I didn’t expect the result to finally reach 164 percent of my campaign goal, given this campaign/goal is five times larger than my previous campaign goals. It’s a testament to my closeness, love, and connection with my supporters (or what people like to call “true fans”). What I raised is equivalent to approximately 14 million streams on Spotify. What I’m doing satisfies my soul as a full-time independent artist. The creative freedom, genuine love, the support I receive from those who know and care about me deeply means so much more than millions of streams.

What’s your favorite song off the album and why?

That’s a tricky one, as I picked these album songs from over 100 demos. I kicked off many great songs from the demos to come to this final list, and each of them is very special to me. My top picks would be “Another Me,” “Love Yourself First,” “Out Of Clock,” or “Dream On,” as each of them encapsulates this album’s theme of melancholy romanticism in the best light. They break and mend the heart at the same time.

Fifi Rong’s album A Funeral In My Heart For Every Man I Loved? is out Friday, December 10.