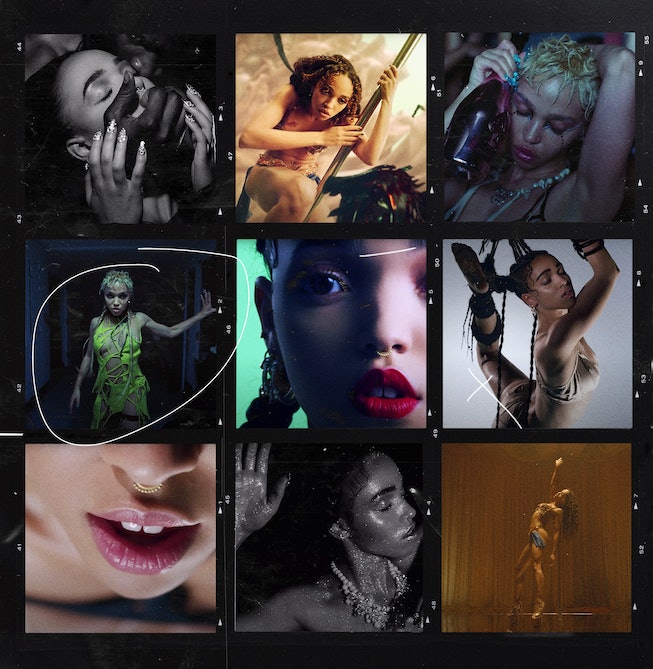 Since her 2012 debut, FKA twigs has consistently stunned with her creative, boundary-pushing music videos. From the austere and heavily conceptual art videos of her first few EPs, to the expansive and lush visual accompaniments of her later albums — her videos have become incomparable in style, technique, and execution. At this stage in her career, they’re wholly idiosyncratic.

Like every great Capricorn, it’s clear that twigs is utterly devoted to her craft. As she’s grown throughout the years, so has her visual style — though, notably, with her signature sharpness always intact.

Below, we combed through twigs’ extensive catalog to pinpoint seven essential videos that trace the trajectory of her music video evolution. Our biggest conclusion? She’s always been ahead of her time.

Back in 2013, when the biggest music videos of the year highlighted excess like Miley Cyrus’ “We Can’t Stop,” or Robin Thicke’s “Blurred Lines” — FKA twigs quietly released the seemingly simple, artistically minded visual for “Water Me,” from EP2, in her corner of the internet. It was inevitably met with some confusion. Here was a giant cartoon image of her face, her eyes drawn impossibly, even comically, wide, slowly swaying and bobbing back and forth before a giant tear slithers down her cheek, defies gravity, and plops right back on top of her head. For the casual viewer, the action-less two minutes was an easy and immediate rejection. “When this song came out there was NOTHING but hate for her, this song and this video,” a recent YouTube commenter even remembers. “The top comment for years was something like ‘This looks like a sequel to Splice.’”

Now, years later — helped on by her popularity and people’s now-familiarity with decoding more abstract ideas — its message has hit home: through her own pain and sadness, the cartoon twigs watered and nurtured herself. Of course, that takeaway was available to us all along. But what remains striking is how early twigs got there before all of us, and how unafraid she was in presenting it without waiting for us to catch up.

Who, but FKA twigs, would’ve dared to release a video like “Papi Pacify?” It’s not hard to see how the 2013 video’s premise could’ve heartily stoked controversy upon its release: the black-and-white visual that’s essentially five whole minutes of twigs relenting to a man’s hands around her throat and, at times, his fingers in her mouth. It’s a slow-moving, glitter-infused and possibly concerning tableau, yet the whole spectacle is done too elegantly, and with too much self-awareness, to be of any real concern of “anti-feminism.” (Not that that’s a benchmark we should be holding videos against in the first place!)

In an interview, twigs did have to dispel any concerns about abuse by explaining that the entire video was a metaphor for feeling silenced in a relationship: “The person I was with was stopping me from explaining how I felt. So the physical manifestation is someone putting their hand in your mouth,” she said. And, she continued, sometimes there was a sick element of liking that as well — “emotional abuse can be tender. That’s why it’s messed up.” Even today, admitting that revelation can feel taboo, much less capturing it so beautifully and simplistically, and without apology.

It’s hard to forget “Pendulum” after watching it once. The mesmerizing 2015 video from her debut project LP1 opens on a tight shot of her lips before slowly zooming out to reveal twigs’ body bound and tied up by yards and yards of her own braids. She’s using the art of Japanese shibari — a form of bondage practice — to express how she constrains herself, while at the same time capturing a load of contradictions: delicateness and harshness, constriction and love. Maybe it’s here we also see the first gleam of twigs’ willingness to take up any discipline, to push her own physical limitations, in service of her art.

And the making of the video is a story worth hearing too. She reportedly had to help the cameraman avoid capturing her through a male gaze by instructing him to shoot “more interesting” parts of her body than just her face and down her chest. “Let’s look at my calves, let’s look at feet tied up, let’s look at the marks on my arms,” she told them. Again, she proves that the sole reason her videos remain timeless is because of her own intervention.

When it comes to discussing FKA twigs’ greatest video hits, 2018’s “Cellophane” is a no-brainer. On a wide-scale, the path-breaking visual arguably pushed the art of pole-dancing into the mainstream without fully divorcing it from its sex-work origins. On a personal level, it was twigs functioning at her artistic peak, blending physical discipline, director Andrew Hwang’s keen eye, and seamless CGI into one beautiful, medium-pushing, high-concept masterpiece. Exquisite.

This darkly bucolic visual from twigs’ Magdalene era is one of her subtler ones, but still feels noteworthy from her utilization of dance to push the narrative forward. Opening in the sweaty interiors of a club, the video dramatically brightens as the scene suddenly moves into the lush wide-spaces of the countryside, all while twigs dances with her friends in a car and, later, with a woman who appears to be healing her. Dance has always been an integral part of twigs art, but it feels particularly symbolic throughout “Home With You,” a sort of spiritual movement or ritual of returning to her body. Throughout its four minutes, twigs seems to be searching for something. At the end, while pulling what appears to be a younger version of her out of a well, she finds it.

FKA twigs is far from the first to create a music video using documentary-style, verité footage. But perhaps what can be considered new (at least for twigs) in her 2022 “ride the dragon” visual for Caprisongs is what she’s chosen to label it: an anti video. And indeed, there are many elements in “ride the dragon” that seem to proudly justify that label. It’s anti-gloss, anti-set, anti-planning, as its voyeuristic-style shots capture twigs and her crew of her dancers spontaneously bursting out into dance in public spaces as well as the subsequent reprimands they receive from nearby security guards or police officers. Endearingly, you can hear her explaining — and lying — throughout the video, “We’re just doing a TikTok!” While “ride the dragon” might not be much of a format-changer for the music video medium as a whole, it certainly is for twigs, who’s more smiley, giggly, and looks to be having so much more fun than ever before.

New FKA twigs skill just dropped! If there’s any constant to be parsed from twigs’ music video catalog and artistic practice is her hungry appetite of adding more skills and disciplines under her belt. In the Magdalene era, it was pole-dancing and wushu, a form of Chinese martial arts. For Caprisongs, we are introduced to twigs the archer, who makes her debut in “meta angel” — a frantic video that finds twigs as her own target when she’s pulling back the bow to strike. When she finally lets it fly, the head burrows itself into her own heart, symbolically killing her ego, or perhaps her weakness of wanting to love again.

What makes the video all the more surreal is the footage’s grainy, in-real-life quality, and the flashes of faces from onlookers, curious about whatever is going on. Unlike “Cellophane” or “Pendulum,” on “meta angel,” the stylistic and protective gloss of metaphor is gone. It’s twigs breaching a new frontier.