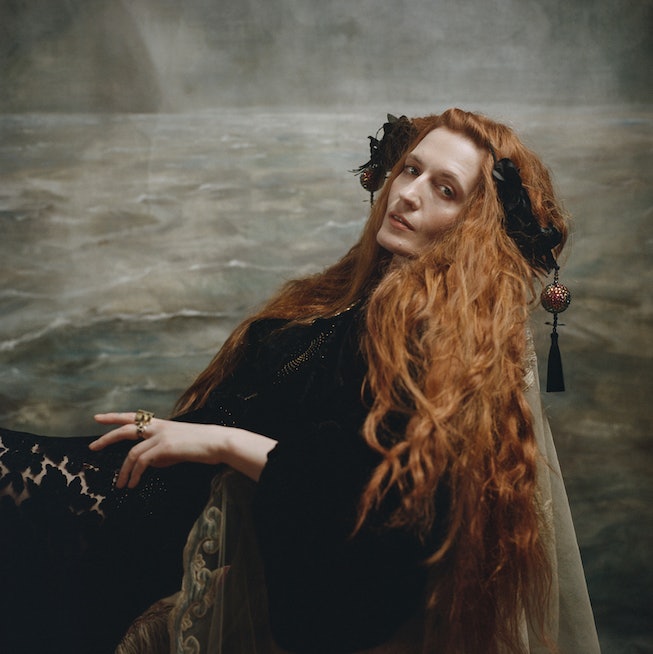 What women must sacrifice in service to their careers in relation to men is an age-old question. Even as modern-day amenities like paid maternity leave and evolving ideas of gender roles have sought to close that gap, it still remains, often lingering in the background for most women as, in the best-case scenario, a mental chasm to surmount.

It’s a question that appears to haunt even Florence Welch — the helm of indie-turned-mainstream powerhouse Florence + The Machine, and influential woman in her own right — on their song “King,” which comes at the query from a slightly different vantage point: What must women performers sacrifice in service to their art in relation to men?

Her conflicted and emotional examination of this topic is all over the pounding new song from the group’s upcoming fifth studio album, still untitled. Released largely as a surprise, its arrival only vaguely announced via overnight billboards and medieval-themed playing cards sent to fans around the world, “King” at first listen appears to be a triumphant anthem, with Welch proudly declaring her title as “king” and decrying other labels such as “mother” and “bride.” “I am no mother/ I am no bride, I am king,” she states on the song’s hook.

But a look in between the lines suggests more friction underneath the surface of its lyrics. There’s a deeper point to be excavated than seeing Welch as someone who blindly loves her “rotten heart” and “dazzling pain” to make art, as she sings on the track, or snapping the necks of men around her as she does while donning a maroon cloak in the music video. Some insight can be found in what she’s said directly about the song in a press statement:

“As an artist, I never actually thought about my gender that much, I just got on with it. I was as good as the men and I just went out there and matched them every time. But now, thinking about being a woman in my 30s and the future, I suddenly feel this tearing of my identity and my desires. That to be a performer, but also to want a family might not be as simple for me as it is for my male counterparts. I had modeled myself almost exclusively on male performers, and for the first time I felt a wall come down between me and my idols as I have to make decisions they did not.”

“King” directly references that tearing between her identity and desires from the opening lyrics of the song as she sings: “We argue in the kitchen about whether to have children/ About the world ending and the scale of my ambition/ And how much is art really worth/ The very thing you're best at/ Is the thing that hurts the most/ But you need your rotten heart/ Your dazzling pain like diamond rings/ You need to go to war to find material to sing.”

Then, the tone of the lyrics shifts, mirroring the same emotional epiphany Welch talks of experiencing over the last few years in the above quote.

“But a woman is a changeling/ Always shifting shape/ Just when you think you have it figured out/ Something new begins to take,” she sings. The foreign desire of suddenly wanting a family and maybe children feels like “strange claws… scratching at my skin,” goes the second verse. “I never knew my killer would be coming from within,” she sings, characterizing her own bubbling desires as a force that could potentially kill her career.

Perhaps here is where the song best highlights the crux of Welch’s struggle, and in turn the struggle of other women approaching the same fork in the road. Surely, in 2022, the desire of having a family and children shouldn’t feel so at odds with — or even so threatening towards — maintaining one’s own creative goals and ambitions. And yet, for Welch, it does, ultimately illuminating the invisible price of making art as a woman — and for others, the price of simply existing in a society still so unsympathetic to people with wombs.

Whether she’ll embark down that path or return to her empty castle is, ultimately, only for Welch to decide. But a hint of where she’ll go lies in the closing lyrics of “King”: “I was never satisfied, it never let me go/ Just dragged me by my hair/ and back on with the show.”