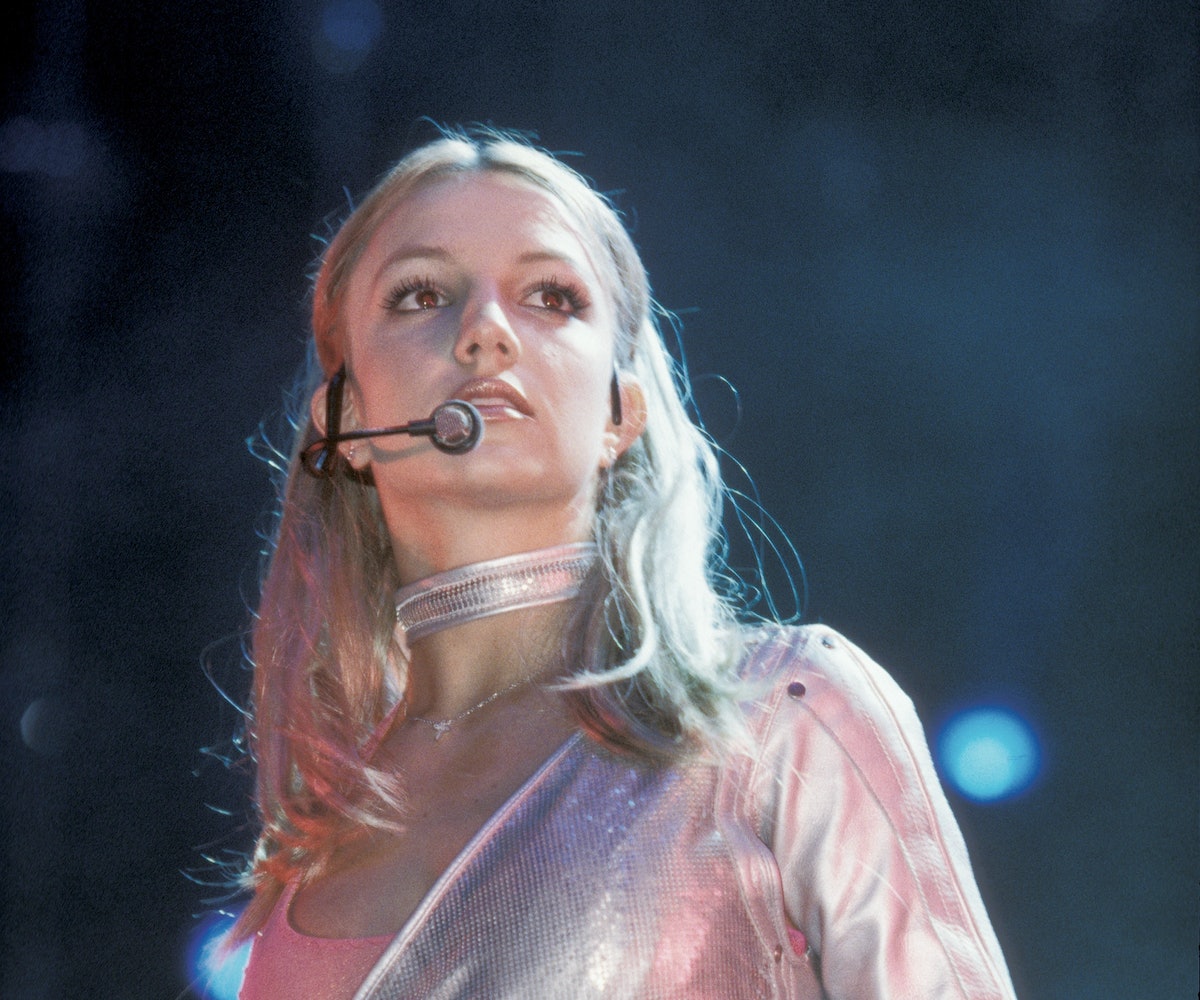 The New York Times has released Framing Britney Spears, a sobering documentary that offers a comprehensive look into the life of Britney Spears, a celebrity whose world was once wholly transparent to us, and is now completely closed off.

Over the past year, the sole narrative Spears has had in popular media surrounds her ongoing legal battles regarding her conservatorship, which she's been under since 2008, and the growing, fan-led campaign to free her from it, #FreeBritney. Framing Britney Spears digs deeply on both of those issues in the documentary, however the overarching story from the documentary is more damning. Through archival interview footage, raw paparazzi videos documenting Spears' infamous breakdown, and interviews with former assistants, lawyers, and journalists, the film ends up painting two distinct portraits: one of a young woman thrust into fame, and one of a world intent on destroying her.

Below, we summed up the most important points one needs to know from the film, from just how much the tabloid industry was profiting of Spears at the peak of her career, to the nitty-gritty details that plague her conservatorship.

Britney Spears once gave out $10,000 in $100 bills to people in her hometown, Kentwood, Louisiana, for Christmas.

Having grown up in the small town of Kentwood, Louisiana, Britney Spears' wide-eyed entrance into the spotlight was initially a very humbling experience for her, Spears’ friend and former assistant Felicia Culotta revealed in the documentary. Wanting to give back to her community, one of the first things she did “when she just was getting famous — we were home for Christmas, and she wanted to go get $10,000 in $100 bills, and she just drove through Kentwood and gave out $100 bills,” Culotta says. “And it wasn’t ‘Hi, I’m Britney Spears.’ It was ‘Merry Christmas.’”

At Britney’s peak, photos of her were going for $1 million dollars a piece.

It’s no secret that the tabloid and paparazzi industry made an appalling amount of money off photos of Britney Spears at the height of her career in the early-aughts, which, perhaps unsurprisingly, coincided with the golden age of the tabloid industry. Framing Britney Spears finally gives us insight on just how much these two industries profited off documenting her every move and meltdown.

At its peak, the documentary reveals, photos of Britney could sell for upwards of $1 million dollars each. Brittain Stone, the photographer director of Us Weekly from 2001 through 2011, estimates in the documentary that the publication would spend $7 to $8 million dollars annually on celebrity imagery, or around $140,000 a week. “Spending millions of dollars on pictures, that just, you know, quintupled the amount of money that was out there, which meant there were a lot more photographers coming in and doing it,” Stone says.

The documentary also interviews Daniel Ramos, a paparazzo (or celebrity videographer, as the film calls him) who worked from 2004 and 2013 and frequently followed Spears. He tries to explain that “it’s hard to get out of [the paparazzi industry] once you start making the kind of money that these guys were making,” while describing the paparazzi’s relationship with Spears as a symbiotic one. “It was like she needed us, and we needed her,” he says. Later on, the documentary shows footage of an interview Spears did with Matt Lauer in 2006, in which, through tears, she says that her biggest wish is for the paparazzi to leave her alone.

Britney did not want her father to be in control of her conservatorship from the very beginning.

If the documentary is to be believed, Britney’s conflict with her father being the sole conservator of her person and estate didn’t just arise recently, but has been present since its inception in 2008.

Once Spears was released from her forced hospitalization in 2008, during the same time her father was trying to establish conservatorship over her, she drove to the Beverly Hills Hotel to meet with Adam Streisand, a trial lawyer who specializes in conservatorships and estates. In an interview, Streisand says that though he initially questioned whether Spears had the capacity to hire him at all, she soon made two judgements that convinced him.

“Britney was able to make the judgement, ‘Hey I get what’s going on. I get that I’m not gonna be able to resist this conservatorship or avoid this conservatorship, right?’ So that’s a pretty sound judgement,” he says. “The second thing was she said, ‘I don’t want my father to be the conservator.’ That was her one request.” She instead wanted “a professional, an independent party” at the time, Stresiand says. That request aligned with Spears’ most recent petition to the court for her father to be removed and a bank to take over her conservatorship. The court ultimately declined to remove her father from the conservatorship, however did allow the Bessemer Trust bank to come on as co-conservator of her estate.

In 2016, Jamie Spears was pocketing 1.5% of all of Britney’s earnings related to her performances and merchandise around her Vegas residency.

One thing that Framing Britney Spears hammers in is just how profitable the conservatorship, and the business of Britney Spears, is for her father and all parties involved. During her Las Vegas residency, the documentary claims that Spears estate was making around $300,000 per show with close to a million dollars being deposited into her bank account each week. Through the conservatorship, her father was pocketing 1.5% of all gross profits related to the residency, on top of his $130,000 salary.

Later, the film shows lawyer Andrew Wallet, who had been serving as co-conservator of her estate for over a decade alongside Jamie Spears, petitioning the court for a raise in 2018, citing “[Britney's] increased well being and her capacity to be more engaged in furthering her career activities,” in his petition. He also describes her conservatorship as “a hybrid business model.” The court approved Wallet’s raise, though he abruptly resigned as co-conservator in 2019.

The only celebrity the documentary includes an interview from is Paris Hilton, who in a short but sweet moment voices her support for Britney Spears. “I love her so much,” she says. “ I feel if you’re an adult, you should be able to live your life and not be controlled. And I think maybe that stems from me being controlled so much, so I can understand how that feels.”

Justin Timberlake played a larger role in Spears’ downfall than we initially believed.

Framing Britney Spears does not paint former ex Justin Timberlake in a good light. In 2001, their relationship incited the same level of public hype and fixation as that of the royal family, the documentary asserts. However that quickly changed once they broke up in 2002. Timberlake immediately took control of the narrative around their break-up, releasing “Cry Me A River,” which heavily frames Spears as the guilty party, and unfaithful during their relationship. The documentary contextualizes this as a particularly brutal moment in the media’s vicious and slut-shamey treatment of Spears.

While it might’ve been cast as a frivolous celebrity drama at the time, it’s nearly horrific to watch now. Though Timberlake can’t be held accountable for what the media did in their own sensationalizing of their break-up — like egging Timberlake on to expose their private sex life — he was undeniably complicit in stoking the press’ vitriol against her. Since the documentary’s release, fans have been reassessing his role in Spears’ downfall and that of another legend, Janet Jackson, wondering how much of his rise came at the expense of theirs.

Over the weekend, #WeAreSorryBritney trended on Twitter, perhaps because the most profound emotion one leaves the documentary with is that of overwhelming sadness, and guilt. The abundant archival interview footage included in the documentary is damning, from clips of Spears being asked point-blank about her virginity by a reporter during a press conference and her politely laughing it off, to Diane Sawyer uncomfortably interrogating Spears about her break-up with Timberlake in a 2003 interview.

Did we do this to her? At the very least, we stood by and watched. One wonders how different Spears’ career could have been if she’d come to her rise today, now that the media has ostensibly grown kinder to female pop stars. But that, too, is probably over-optimistic thinking.