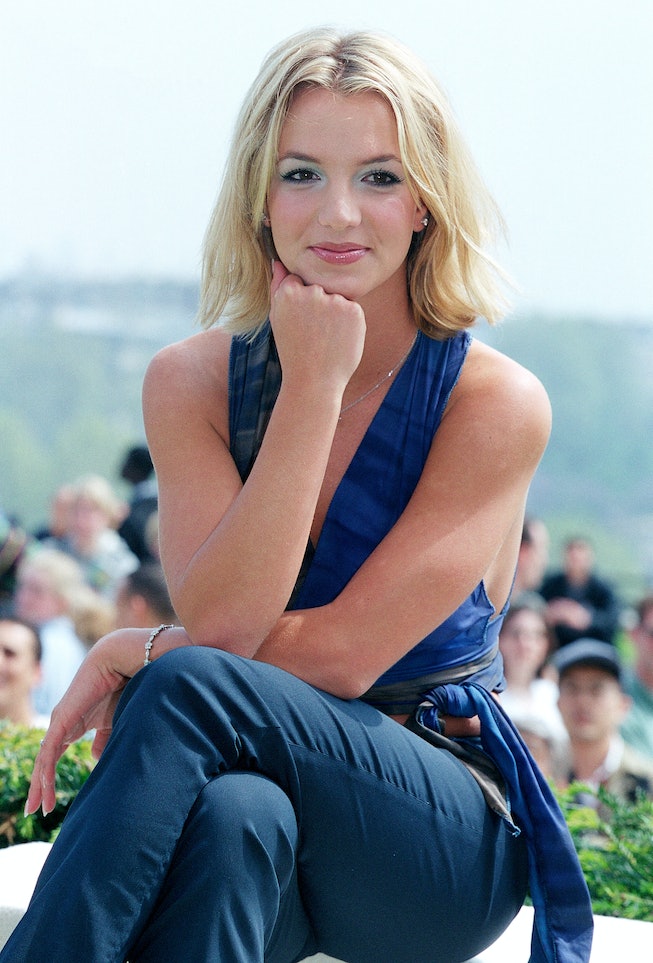 If you've been close to following her Instagram at any point this year, one thing has become clear: being Britney Spears is not easy.

Her seemingly innocuous feed toes the line between pseudo inspirational quotes, spirited videos of the pop singer dancing, and sending chaotic-yet-delightful messages to the LGBTQ communities or about her gym burning down. There's also her series of modeling videos where Spears can be seen strutting around in random pieces from her wardrobe. You get the picture.

For a long time, the arguably bizarre antics were pure internet entertainment to most but for the past year, it's become a point of concern for many of her loyal fans. Some speculate the captions and her odd series of videos is not Spears being her "quirky" self but a coded cry for help, which is also what's led to the now-viral #FreeBritney movement. Representatives for Spears did not immediately respond to requests for comment from NYLON.

But are these just conspiracy theories or is there substance to the increasingly amplifying hashtag?

Let's look back to the beginning of Spears' troubles: 2008, when a highly publicized breakup with then-husband Kevin Federline spiraled into a string of stints in the psychiatric hospital, public meltdowns, and a custody battle for her two sons.

Following this, the Piece of Me hitmaker’s father Jamie Spears asked the court to grant him a "temporary" conservatorship over her, which was precisely when things went super awry.

To clarify, a conservatorship is a legal provision in the United States that allows a court-appointed guardian or "protector" to make decisions on behalf of the elderly or those deemed unable to care for themselves. These usually include people suffering from dementia, schizophrenia, or other illnesses that render the "conservatee" unable to carry out day-to-day activities. While the provision grants the guardian, in this scenario, a massive control over the individual's life, their entire job is to ensure the well-being of the person and help them take care of themselves.

And surely, who better than Spears' own father to have her best interests at heart? Let's not forget, that at least on the outset, the singer did struggle with a number of mental health issues. So the decision went unquestioned even by Spears' most ardent fans, for a while. Except 12 years later, the "temporary" terms of the conservatorship became permanent after her father petitioned the court.

Spears is currently not allowed to leave her home, drive her car, spend her own money, or choose her own lawyer without her father's permission. She also can't post on social media without approval, speak to the press or do unscripted interviews, and has 30% custody to her sons Sean and Jayden. She is 38 years old.

Within this time, Spears has released multiple studio albums, and completed a world tour for the sixth studio album, Circus, that grossed over $131.8 million, been a judge on X-factor — all demonstrating she’s clearly fit to work. Her online presence (albeit not recently) itself has been showing that she is well, and nowhere close to the state of things back in 2007-2008.

But in April 2019, when the singer abruptly checked into a mental health facility, rumors caught on that it wasn't voluntary. Press at first cited her father's deteriorating health as the reason behind Spears' mental distress. "It's important to always put your family first… and that's the decision I had to make," Spears said a couple months prior to her check in to the facility. "A couple of months ago, my father was hospitalized and almost died. We're all so grateful that he came out of it alive, but he still has a long road ahead of him. I had to make the difficult decision to put my full focus and energy on my family at this time."

#FreeBritney: A Plea To Ease Restrictions On Her Conservatorship

Social media, however, was full of accusations that Spears was checked into the facility by her father, and kept there against her will, that her team fervently denied. Even sister Jaime Lynn Spears came out to offer clarity. "10 years ago, who was there??," she wrote on Twitter. "I have been here long before anyone else and I'll be here long after. I love my sister with everything I have. So, anyone or anything that speaks to the contrary can GTFOH with all the comments about what you don’t understand."

The Toxic singer herself took to Instagram addressing her fans, saying "all is well."

But nearly a month later, online sources, namely TMZ, revealed that Spears pleaded with the court to ease restrictions on her life, and admitted she was held at the mental health facility against her will after refusing to take drugs forced on her by her father. The judge did not concede.

That was the tip of the iceberg for what we know as #FreeBritney. Mother Lynne Spears also seemed to have 'liked' social media posts that alleged she was being held against her will, solidifying the public faith in the movement. More recently, she has also filed a request with the Los Angeles County Court to have more of a say in the pop star's finances.

As of September 2019, Jodi Montgomery, her longtime care manager, has been appointed as her new conservator after her father stepped down. Whether there will be any modifications in restrictions is now pending hearing until at least Aug. 22, 2020.

Although Spears herself stayed quiet on the matter since the court hearing, it doesn't help that her recent Instagram posts seem more bizarre than usual. People are also reading into the lyrics to songs such as "Overprotected," "Piece of Me," and "Circus" as a way to communicate feeling caged and controlled.

Moreover, Spears' team disabled the #FreeBritney hashtag after it gained traction on Twitter making everyone question to what extent has the pop icon been silenced all this while. There's also a series of TikToks recently released by her former in-house director and photographer Andrew Gallery where he reads out a letter that he says was handed to him by the singer herself in 2008. The letter asserts that she has in fact been silenced the whole time and continues to be in complete control.

#FreeBritney: What's At Stake & How To Support The Movement

While in the end, these might seem like nothing more than conspiracy theories, despite Spears' own reported admission of wanting out, there's a lot to be gained out of keeping the singer under conservatorship.

A 2016 MoneyNation.com report cites an earning of over $672 million from her career. But as of 2018, her conservatorship filings report a net worth of $56 million. This, despite her Las Vegas residency, concerts, endorsements, and merchandise sales, which, of course, begs the question: How did her net worth fall? And if it didn't, where is the rest of the money being spent?

And, sure, Spears hasn't herself been too vocal to her fans about wanting out. But on the contrary, if she is truly happy with the current arrangement, why hasn't she said so? There are a lot of questions and too many speculations, but one thing is certain: If Spears is indeed well enough, it is time for her to have a say over her own life, her own money, along with her own kids.

If you'd like to be part of the movement and help Spears gain back control of her life, there's now an exclusive online platform where you can sign up to attend a #FreeBritney rally, or petition to the White House, to the California Attorney General and Los Angeles County, among others.