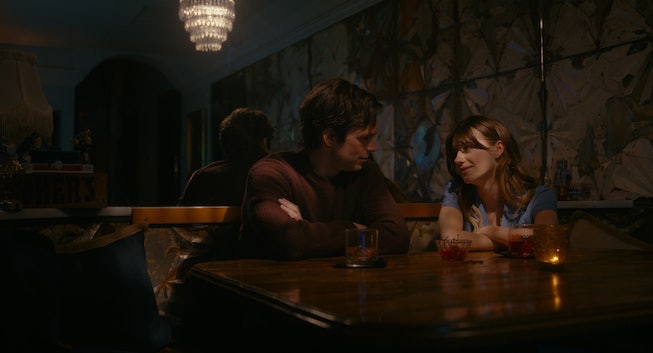 In Fresh, the deliciously comedic horror film about the meat market nature of modern dating, out on Hulu this Friday, Noa (Normal People’s Daisy Edgar-Jones) finds herself in a familiar place for anyone seeking a connection. Subjected to endless dating app swiping and the indignity of pretentious, disappointing dates, she’s not quite ready to give up, but getting there. That is, until she meets handsome doctor Steve (Sebastian Stan) in the supermarket, in a too-good-to-be-true meet-cute that quickly turns into an exciting, cozy relationship. Though all the red flags are there — as quickly pointed out by Noa’s best friend (Jonica T. Gibbs) — naive Noa chooses to see them as green lights instead, much to the audience’s horror (and to her predictable detriment).

Despite the seeming inevitability of the plot, the film’s numerous twists and turns are truly shocking — and the emotional stakes of the film are high, as Steve and Noa’s early chemistry have us invested in their story. As Stan told NYLON over a zoom call with his co-star, “We all understand to some extent, this feeling of something that feels so honest or so right, and then being wrong.” When Steve turns out not to be the person he first presented himself as, but something unimaginably worse, Noa and the audience are already in too deep to get off the ride. As bad as dating first seemed, it’s actually much more horrifying — and Noa has to rely on her steely resilience and quick thinking to save herself and her friends, if she can stomach it.

With a Get Out-meets-Promising Young Woman feel, Fresh is ultimately a satisfying revenge thriller. Written by Lauryn Kahn and directed by Mimi Cave, the film subverts genres while combining many of them, remaining truly surprising — and funny — up until the last minute of its nearly two-hour run.

Read on for NYLON’s chat with Edgar-Jones and Stan about filming Fresh and what the movie has to say about trusting your gut, no matter what.

What did you each think when you first read the script?

Sebastian: I was so taken with the beginning of the movie. I sort of had an idea where it was going, and so I felt like I came in expecting certain things. And then when I was reading it, I kept getting sort of weirdly more comfortable with these characters and watching what seemed to be a genuine kind of fun, harmless connection. Then I was weirdly very caught into trying to see where it was going, and how it was going to get there. Even though I sort of knew, it still felt like the rug was being pulled from underneath me. I thought it was really smart in the sense that, it's still that connection seemingly maintained itself through the movie. It also becomes very much what brings Noa into the situation. And then also weirdly what gets her out. That's different than we've seen in this kind of genre, I guess.

Daisy: I had a similar reaction. I read it not knowing what it was really about. I had an inkling, but yeah, I kind of read it with fresh eyes and I don't know, I just thought that kind of balance of tone was something I hadn't read in a script in a very long time. I really enjoyed that, that you have these moments of real stake in truthfulness and realism and tenderness. And then you have these kind of crazy sort of mad, violent moments too. And there's always balancing this dark humor throughout, which I really enjoyed. I loved the kind of soundtrack that Lauren had written throughout. She'd written sort of some brilliant '80s music. I knew kind of what the tone was going to be, going into it, which you don't always know.

Why do you think it was so important that the two characters had that connection? It’s a focal point of the film, how much Steve likes Noa. I'm curious what you made of that as you were creating your characters and why that was so integral to the film.

Sebastian: I think if there wasn't a genuine connection, you wouldn't have been as invested as an audience. I think the fact that, to some extent, you understand there was a connection there makes us as an audience weirdly complicit in the story. It makes us suddenly feel off our game. We all understand this feeling of something that feels so honest or so right, and then being wrong. And that's very difficult to accept — this idea of, I was wrong about this person. Because sometimes when you have that intense connection at the beginning, it's just so validating because it feels real. And also that aspect in life seemingly felt important to comment on, in an extreme way and in a very creative way. That's what I thought Lauren and Mimi did brilliantly with the movie, taking apart a connection that even though it was genuine, had all these really complex issues.

What it was like working with Mimi [Cave] as a director?

Daisy: It was such a joy working with Mimi. I'd had a general meeting with her, and she'd sent us to through a sizzle reel of her visual idea for the film. I'd already read the script at that point and was so curious to see what her vision was. I just thought it was incredible, and she has such an amazing knowledge of the camera and how to use that to tell the story. I think the aspect of camera throughout the film is really interesting, that we start just like the film does in quite a generic filming way. And then as it gets more chaotic, so does the camera, I thought that was really cool. She has such great taste in music, too, which you can probably tell when you watch the film. I just thought she was really exciting and really thinks outside the box. And also is a very generous director that would allow Sebastian and I to play in the scenes and was really up for hearing our input and really a brilliant collaborator. It was just such a joy working with her.

There’s a scene in the kitchen with Noa and Steve, where Noa is first trying to escape, and it’s very intricate. What it was like to choreograph scenes like that?

Sebastian: That's a cool example of a stunt mixed with camera angle, mixed with what's most effective. I remember exactly, we were all there trying to figure out: what's most realistic? What would you do? And then I remember, then they got the idea, oh my God, wait a minute, let's put the camera here, so that when you're coming at the camera, you get into that closeup. And then it sort of slows there and then you see kind of drift back. And even that motion in itself has a visual component, but is also weirdly metaphorical. I just thought that was so interesting.

Sebastian, Steve is a type of villain we’ve seen in movies before — what if any back story did you give him, or did you study any other performances when working on the character?

Sebastian: It was just a compilation of things I'd researched and seen in true crime documentaries. Looking at a lot of these serial killers and studying narcissistic complexes, and then tracking down a couple of actual psychotherapists who worked with serial killers. And there's always a reoccurring kind of thread there, that there's a genuine effort in constructing this persona. And again, not without a past that enforces it. I sort of stumbled on this formula that again, I can't claim that it’s a known thing. But one of the hypotheses was that if you have trauma mixed with abuse, mixed with something biologically happening — like a child falls and hits their head — if you have those three components, you can create a psychopath, essentially. There's a real mix of things that are going on. Just trying to peel back and figure out how somebody would start going that direction was terrifying and fascinating.

And then Daisy, slightly lighter question, but what was it like to take on doing a different accent?

Daisy: It was my first time doing an American accent. I've worked in accents before, and I thought American would be easier to access because I've grown up watching American film and American TV. But I found it very difficult, I think, especially because I really think accent does a lot for me in terms of finding a character. I think the way we speak really goes in your body in a different way. And through working on accents, I really realized that. And so there was sort of an inherent sort of confidence to an American accent, but then Noa's quite self-effacing. So it was trying to find what that particular sound was. And obviously she says, "I'm from the East Coast," but that's quite a large stretch of areas.

In the UK we don't have a general accent. We're very specific, you can walk 20 minutes up the road and have an entirely different dialect. And we're very sort of attuned to that. But in America, there is such thing as a general American. I found that hard to hang my hat on, because I couldn't quite hear what sounds were. I worked with a brilliant accent coach called Francine. I worked with her all of last year, because I did three different American accents that year. And she actually is from Philly, so she kind of put sort of light Philly sounds in, if there is such things as a light Philly sound. And that was helpful, but yeah, it was really, really fun to find it. And it really helped me, because most of my prep was really getting her voice right.

I think you nailed it! The film is clearly a commentary on the modern dating scene, and I’m wondering what you both took away from the film in terms of its main message for audiences.

Sebastian: I think it's, what you see is not always what you get. We live in a world now, where there's these online personalities. We have to become aware of how much of the work we do for the other person, without even knowing them. Because you're going on a profile, you're looking at certain pictures that they selected a certain way to tell a certain story, perhaps not even who they are, but who they would aspire to be. So the intention could be good, but then you're looking at something, because you're programed to be looking for this X, Y, and Z. And then when you see that evidence, you kind of drift to that and you just question your instincts, I guess your GPS system.

Daisy: I'd agree. I think that's so true. And the film does explore that, kind of the projections we put on each other. And how much that is coming from us and how much we should actually really just be present and read the other person for who they are. I guess also trusting instincts, too. If you feel that whole, hair in the back of your neck going up, then trusting in that actually, and not trying to just explain that away.

And always find out where you're going for the weekend, right?

Sebastian: Yeah. But also that moment right, where you're like, something is not 100 percent. But you know what? No, it's fine. And you talk yourself out of it, and suddenly you're in this thing and you're like, oh my God.

Fresh is now streaming on Hulu.