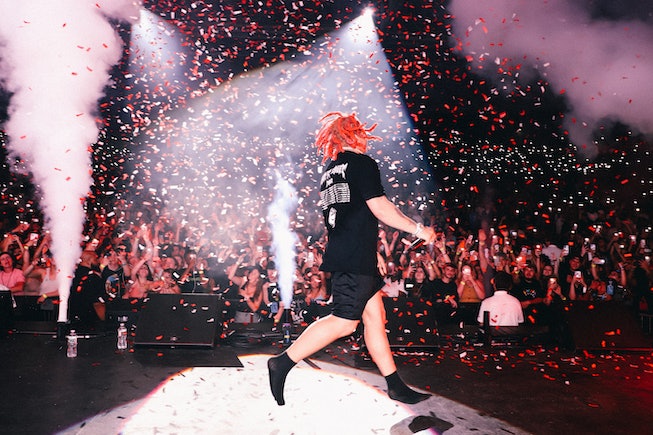 There’s nothing quite like the energy of live music, and perhaps no one knows the thrill of capturing that scene better than concert photographers.

“A live show is sort of like fishing,” photographer Garrett Bruce tells NYLON over a Zoom call when prompted about the challenge of framing the perfect shot. “You really don't know what you're going to get.”

At just 20-years-old, Bruce has already shot some of the biggest names in the music industry, from Kanye West and Miley Cyrus, to Juice WRLD and A$AP Rocky. “[Shooting live shows is] a fun challenge to try and get the best stuff out of it,” he adds. “You don't really have full creative control, you really can't tell the person you're shooting, hey, can you go stand on this side of the stage at this moment? So that definitely makes it challenging.”

It’s a challenge Bruce is clearly up for. The Princeton, New Jersey native first picked up a camera in high school, taking photos of landscapes near his home before getting the music photography buzz during a chance encounter at a K Camp concert. “One Day, my friend hit my on Snapchat saying K Camp was performing at Princeton University. I ended up sneaking on stage, and while I was shooting, I was like, ‘Dang, this is something I really want to do. From that moment, I just put my all into it.”

A freshman in high school at the time, Bruce started DM’ing artists, managers, and anyone he could find in the music industry, pitching himself as a photographer. It’s already led to major moments for Bruce, like a billboard in Times Square featuring the late New York rap legend Pop Smoke.

“That was one of my favorite shoots, one of the most special shoots I've done,” Bruce says. “Then being able to see that in Times Squares...it was just was a crazy, crazy full circle moment.”

Now, Bruce is using his time to give back, working with Soho Youth Club to give interested kids cameras and teach them the basics of photography. “I'm going to try to surprise them with an artist shoot so they can get a full experience. I've been doing it for so long and I haven't really had an opportunity to give back, so I'm excited to be a part of something that can make it possible.”

Bruce also has a book of his photography, featuring 244 pages of both seen and never-before-seen photos, including artists like Lil Uzi Vert and Playboi Carti at the beginning of their careers.

“There were just so many great memories from that time period of like 2016, where all these Soundcloud rappers were in their prime about to blow up,” he says. “I thought, why not put it in a book and just let it be out there for history?”