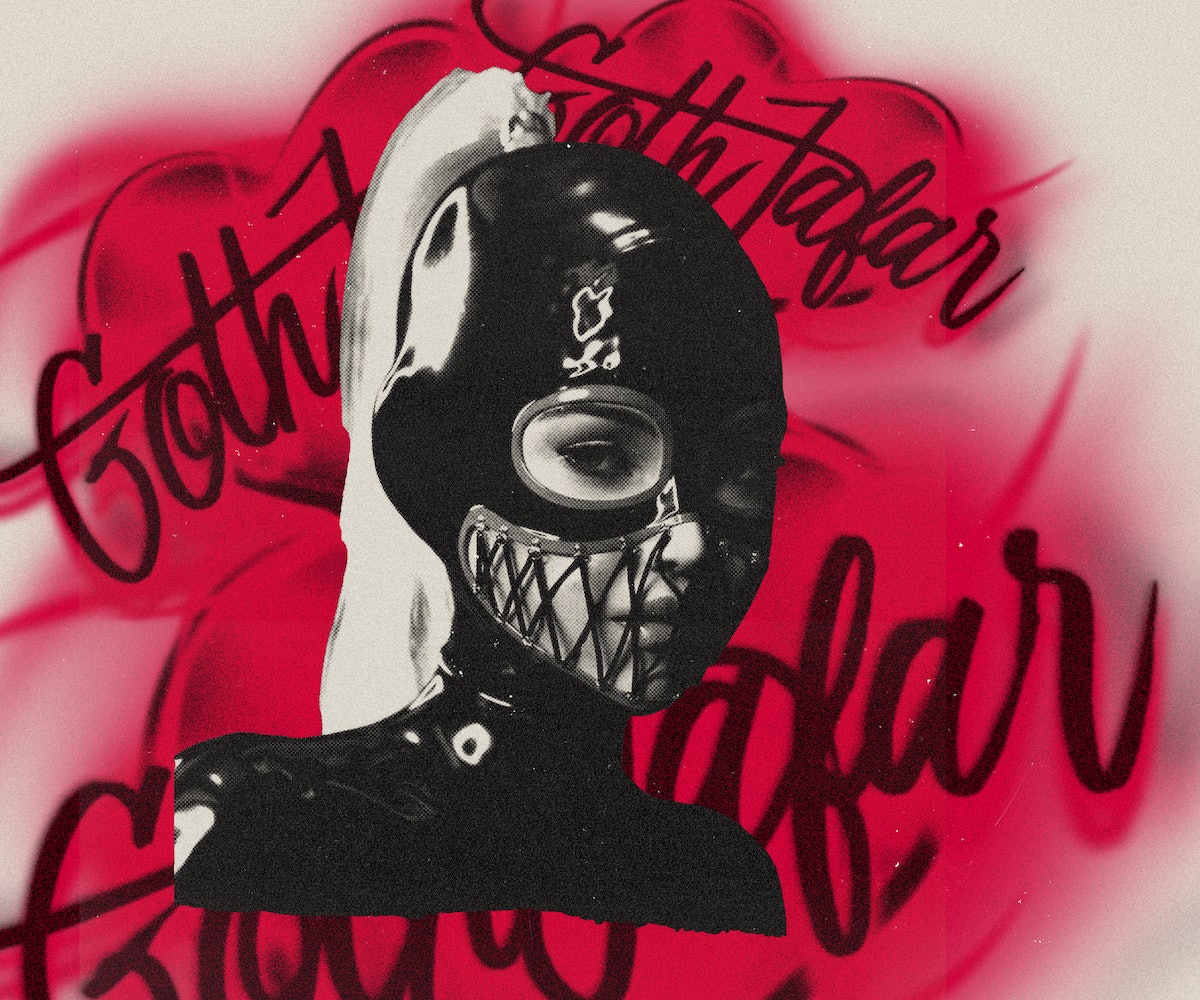 As far as contemporary music lore goes, the story behind Grimes’ creation of Visions is legendary. Conceived during a feverish, multi-day speed bender, it’s a tale that makes Suffy Baala laugh out loud every time. The 24-year-old DJ, who goes by the moniker Goth Jafar, may be sitting in the makeshift outdoor seating area of a tiny West Village Italian café, but spiritually she’s closer to one of her favorite artists than ever. She’s also wiped out from popping an Adderall at 1 a.m. in a creative burst.

Baala tells me about the mix she stayed up making — one packed with the type of feral, pent-up sexual aggression that only comes after being cooped up in a pandemic hell for over a year. Yes, things were bad, but the pandemic pulled up with one surprise Baala wasn’t expecting: a jump-started DJ career.

Baala’s road to DJing was one of kismet. As a natural music curator, she knew it was the best way to put her taste on display. Baala had made a name for herself as an avid Twitter sh*tposter and one of the leading purveyors of emerging pop music. Not only could Baala put you onto an artist months before the majority of media even caught wind, but her deep love for her favorites and her sharp humor helped build a following. She lovingly referred to Grimes by her “musty elf cheeks” in the same breath as deconstructing the genius of her song’s production. Baala knew what she was talking about, and she knew how to keep people listening.

But waxing poetic about music via tweets got old. And as COVID stripped away her refuge of sweaty, underground raves in favor of Zoom shows, Baala’s destiny came knocking in the form of longtime Twitter mutual and PC Music singer-songwriter, Namasenda, who hit her up to do a DJ set for Club Quarantine. “I know you have good music taste,” remembers Baala of what Namasenda said. “I know you have it in you.”

Things got even more surreal when Baala realized who else was on the lineup of her debut set: PC Music founder A.G. Cook and avant-pop singer Hannah Diamond — two artists she’d listened to and loved since 2014. “They really shaped me,” she explains. “The summer of 2014 was life-changing and just to play with those artists was just like, ‘What?’ I still don't even know how it happened.”

That year was pivotal to Baala’s music journey for another reason, too: it was the year she first heard the avant-garde production of the late producer, SOPHIE. Once Baala heard the dizzying, fizzy production of SOPHIE’s single “Lemonade,” the course of Baala’s life shifted forever.

“I just can remember the distinct day I first heard her music. I was on Twitter, Chippy Nonstop was tweeting about it. I was like, ‘What is this?’” she recalls. “It was just something I've never heard in my life. I felt like a missing piece of that, if that makes sense. It was like gender euphoria. I couldn't explain it at the time, but it was like hyper-femininity packaged into music.”

That hyper-femininity has come to define the energy of Goth Jafar mixes, which — much like her sun sign Gemini — are clever, chaotic, and bring the party full throttle. Her work unfurls into a rich story, and those with sharp ears are treated to playful twists and progressions. On her heav3n: reloaded mix, Megan Thee Stallion’s “Captain Hook” sounds like it did a line on Mario Kart’s Rainbow Road before shifting into a blaring remix of Nicki Minaj’s “Yikes.” When Baala goes from Flo Milli’s “Pussy Cat Doll” to City Girls’ “Pussy Talk,” before exploding into her favorite SOPHIE track, the cheeky, lightspeed, femme bot track “Kitty Cat,” you better believe she’s doing it with a wink and a cackle.

On her mix for the New York City women's DJ collective DISCWOMAN (which she describes as “estrogen, but video game''), Baala opens things up with a monologue from Euphoria over a piano solo. It’s a scene from the show’s special episode in which Jules discusses her anxieties about transitioning with her therapist.

It’s a moving scene for any viewer, but for Baala it was pivotal. “I don't think any form of media has ever really touched me in a way that the Jules special episode has,” she says. “Everything she said hit a little too close to home, especially because it took me such a long time to get to a point where I was just like, ‘I'm a Black trans woman. I'm not putting up with any more of this sh*t. I want to be happy. I'm not doing this anymore.’”

Baala had been plagued with feeling like it was too late to transition, that she had missed her window, that her body would never be what she wanted it to be. "That monologue, when she goes from thinking about being stuck in puberty forever to wanting to be strong and beautiful like the ocean. I was sobbing. It was waterworks.”

The sadness is palpable in Baala’s DISCWOMAN mix. The aforementioned piano drops out and is replaced by operatic moans and flashing synths. It feels like you’re drowning when SOPHIE’s “Is It Cold In the Water?” melts through. You, too, are gasping for breath when the dark production of SHYGIRL’s “Gelato” comes bubbling to the surface.

The mix was dedicated to SOPHIE and the late artist and curator Terrell David. It probably won’t be the last mix, last set, or last anything Baala dedicates to SOPHIE. Baala is emotional as she speaks about the late producer, but her artistic resolve is strong: everything she does will be in honor of her.

“I always say she's watching over the dolls. She's watching over the trans girls,” she says. “She really showed me to not be afraid to transition. She laid the groundwork down and I feel like it's our job to carry that. I don't want any straight, boring techno DJ to take an already moving scene that's just so exciting and change it in every way.”

Currently, Baala is in her chrysalis era. She’s wearing almost exclusively baggy clothes, she tells me, until she can have her true doll debut. And it’s very much on the horizon — she’s about to hit seven months of hormone replacement therapy. If Baala’s life is a video game, each HRT treatment levels her up until she meets the final boss: the full-blown doll mode version of herself. But instead of defeating her, they’ll probably just party together, and it’ll be a night to remember.