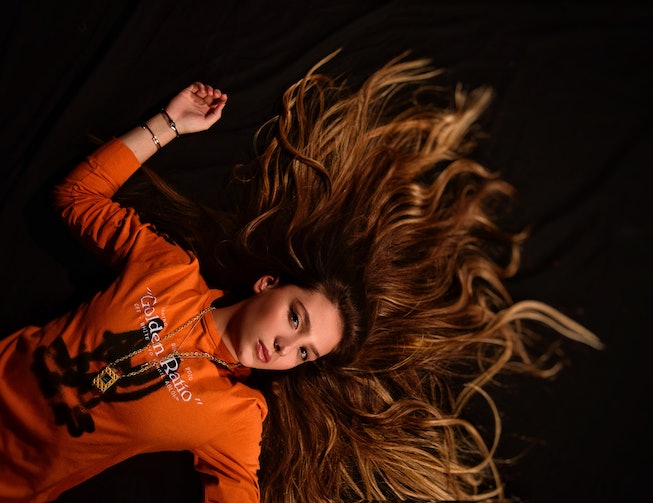 The YouTube cover star to working artist pipeline isn't always as simple as it may seem. Breaking through to an audience with original songs comes down to lots of factors, and perseverance is one of them. 19-year-old Grace Gaustad, who first launched to viral fame with her stripped down cover of Hozier's "Take Me To Church" in 2018, has been putting in the work for most of her adolescence.

"I started writing and playing piano at the age of 6, and I haven’t stopped since," the Arizona native tells NYLON. For her 16th birthday, Gaustad's parents let her start the YouTube channel that would eventually gain fans from all over the world. Three years later, she's back with the visuals for "Out Of Time," her first single off forthcoming EP After Dark I, premiering below. Co-written with Scott Effman, the song highlights Gaustad's unique vocals over a synthy, bass-friendly track, with lyrics that are raw and personal.

“Even though I’m young, I feel like I’ve wasted so much time on stupid things," Gaustad said in a release. "The world’s in a crazy spot right now. We don’t know what the future will be. In your teens, you only care about very superficial things like your friends, parties, girlfriends, boyfriends, how you look, and your parents. But, what about the real shit going on? It’s about the fear we’ve spent too long worrying about the wrong things.”

Read on for an interview with Gaustad and watch the premiere of "Out Of Time," below:

How did making music become part of your life?

Music has been a huge part of my life since I was a little girl. I remember my mom introducing me to some of her favorite artists like Bruce Springsteen, Elvis Presley, and the Beatles, and after hearing some of those early records all I could think about is what it would be like to write and sing my own songs, which is exactly what I did. I started writing and playing piano at the age of 6 and I haven’t stopped since. Music will forever be my first love.

When did you know it was something you wanted to pursue full-time?

The first time I ever heard “I Kissed A Girl” by Katy Perry on the radio. My dad was driving me home from a friends house and I just remember hearing it in the backseat and thinking to myself — that’s what I want to do one day. I want to be a rockstar.

I have a ton of musicians I absolutely adore, but I would say some of my biggest influences are Lady Gaga, Michael Jackson, Taylor Swift, Amy Winehouse, Frank Ocean, and Rihanna.

What was the inspiration behind "Out Of Time" — both the song and the video?

The inspiration behind the song was this idea that we live in such a superficial world, where we don’t spend enough time thinking about the important things or spending time with the people we love or doing the things we love. Time is not endless. We have a very limited amount. This last year really put that into perspective for me, and I think a lot of other people as well, just how precious time is and how important it is not to waste it.

First, I'll be releasing three more singles in the next few months to complete my EP, After Dark I. After that, I will be releasing my first full length anthology album that tells a linear story of the first 18 years of my life until now. The music is very personal and will hopefully connect me to listeners in a very intimate and deep way. Truth is such a big word for me and this album is all about that.