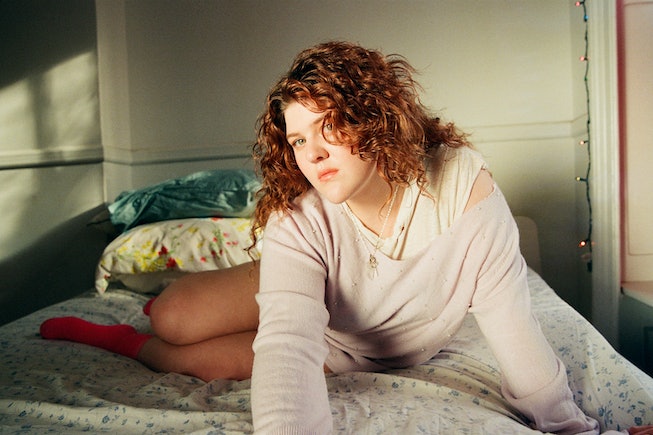 The first time I heard Grace Ives, I knew I was hearing something different. It was at a late-night party when her 2022 single “Loose” came quietly on the speakers. With its clanking beat, alternating between rickety and full, and Ives’ husky voice, it stood out from the indistinctive stream of pop that was otherwise playing. It felt irreverent, playful, like it didn’t take itself too seriously but still knew the serious chops it takes to write a great pop song. The rest of her sophomore album, Janky Star, sounds just like that, too.

Though Ives, 27, has been in the music scene for some time now — she released her first EP, Really Hot, in 2016 — Janky Star has become her breakout moment of sorts. Upon its release, Pitchfork anointed it as Best New Music. Its standout single “Lullaby” — about the monotonous, comforting loops we found ourselves in during the pandemic — I heard one evening flipping the channels on TV. It’s not hard to imagine her confident, rough-around-the-edges sound finding a comfortable home in the playlists of the Lorem generation. Getting here, however, required Ives to overcome her own challenges during the recording process: namely, her imposter syndrome, and learning to work with a co-producer, Justin Raisen (Charli XCX, Angel Olsen).

“I thought that it would be more powerful if it was just me doing everything,” says Ives from her New York apartment one afternoon over Zoom. “People would [say], ‘Whoa, she can do it.’ But now I'm like, it's so special. Justin has been amazing. There has to be so many more people who I haven't even met yet who will spark [new ideas].”

On her album, that growth pushes her music into a whole new league. Her pop, like a Jenga tower mid-way through the game, manages to defy gravity even if it sounds like a few pieces are missing. In fact, that might be the best part: how big Ives can make it seem with very little at all.

Below, NYLON caught up with Ives to breakdown the creation of Janky Star. She talks her creative process, working with Raisen, consulting a psychic, and the track where she finally figured it all out.

How are you feeling about Janky Star? It's been maybe a bit over two years since your last album.

I'm so excited. I feel it's been so long since I actually sat down and wrote and recorded these songs, so there is some distance between me and the music. Just like time though and literally how I'm moving away from it because of time. But I'm so excited. It's my first bigger label situation, and I was always like, “Okay, well, let's put it out!” And it's going through this label process of being like, “Okay, no, not really. Single and then single and then album.” And I was like, “What, who gives a f*ck? No, just put it out.” But it's finally here.

Do you feel like the songs have changed since you remembered making them?

Kind of. I just had a flash of Doja Cat giving her acceptance speech somewhere being like, “I like to downplay shit, you know?” I do kind of oversimplify the songs, and then hearing them back now, I'm like... I'm impressed with myself all over again, like listening now with fresh ears of it being not just for me [but] for everybody.

That's always a good surprise when you feel like you can impress yourself.

Totally. It's so easy to be like, imposter whatever syndrome. A couple weeks ago I was going to this bigger artist record release party, and I was really nervous. I was like, “I'm going to listen to his music on the train so that I know it,” and then I was like, no, no. I need to listen to my music because it's been a minute and I need to remind myself of what I'm capable of and carry that confidence that my music makes me feel with me at all times.

When did you start writing the music for Janky Star? You said it's been a while.

Yeah. I think that I'm a big song person. I don't think I was ever like, “Oh, I'm going to sit down and make an album.” I've been collecting song ideas for my whole more mature life. I had all these really strong melody and chord and beat ideas coming right off of [my debut album] 2nd in 2019. Lyrics are kind of the hardest part for me. I'm much more interested in the beat and the rhythm and the chords and the melodies and like all the top lines.

But quarantine, I went upstate for three weeks where I didn't really have internet and I was just actually writing. I think that kind of isolation sent me into a different mode. But it was pretty right away. I put out 2nd and then I was like, “Okay, what's next?” I always have a folder on my iTunes that's like “post-2nd.” And now I have a post-Janky Star one.

Is songwriting very embedded in your daily routine?

I keep voice memos, so I'll just be chilling and then a melody will pop into my head. It's not really a part of my day. Randomly I'll find myself singing something and I'm like, “Oh, that's kind of good.” And I'll record it. Then, the creative time finds itself naturally. I think I want to be more structured in my daily routines just for my mental wellbeing, but in the past, it's been sporadic and all of a sudden I find myself writing a song. Definitely I don't have to force it, which feels nice.

You’ve always produced your own music. How was working with Justin Raisen for the record?

I feel like it was kind of a unique co-producer relationship. I had all these songs, all these demos and in my mind, I was like, they're done. I do everything myself, no collaboration. But then we got on FaceTime and we hit it off. We were texting last night. He sends me videos of his kids. [There’s] really nice mutual respect and love there.

I think what he is so good at is hearing the little thing that it needs. He kind of filled in the missing pieces in a way that also made sense to how I work. And it was all through FaceTime, because it was quarantine and we're both homebody people. But when we finally met and went over everything that we had somehow made together, I got to see his process in real time and it was so similar to me. We're both Aries, so maybe there's something there, but he'll just get on the floor and loop a crazy guitar screeching sound that I'm like, “Ah, okay too much.” But then he'll just take a little piece of it and it'll be the gold that can come in at a certain part. It's hard to put into words how he works, but it felt so natural and in tune with how I work, where it's not taking things apart, it was naturally seeing how things should flow and rise.

“I don't think it takes that much to make a good, cool sonic space.”

Did you reach out to Justin to work with him or was this someone that your label connected you with?

I don't know anybody. It was kind of an uncomfortable dinner discussion where my label was like, “Yeah, it's really good. But it needs to be boosted a little bit, or it would make sense for a first project under a larger label to have a bit of a helping hand.” In my mind I was like, “No, I'm the producer.” And the only producers that came to my mind were, like, Rick Rubin or Mark Ronson.

But then they mentioned [Raisen] because I think my manager has put artists with him and I realized who he was. I also met with a psychic when I was having a hard time with this whole co-producer thing and she was like, “There's a fire sign male who is 3000 miles away from you who's going to take this project to the next level.” I was like, “Who is it? Is it Ariel Rechtshaid?” Because I know him and I talked to him. She was like, “It's not Ariel, it's someone else.” I think it turned out to be Justin.

That’s incredible that the psychic got so detailed with his sign.

No, she's amazing. She has ghosted me for like a year now because I think she gave me what I needed. I like to tell myself that she knows I'm fine.

When I listen to your music, it sounds like you’re pulling from non-mainstream sonic palettes. What do you look for when you're trying to figure out what you want a song to sound like?

I think for this album, I was pulling more from that blog house era of music, which is very… I mean I was a huge NYLON fan. I put on my American Apparel romper for this. I think that's where I was drawing a lot of inspiration from, like Rah Rah and Spank Rock and Amanda Blank. I don't think it takes that much to make a good, cool sonic space. I'm looking to keep it simple when I'm starting out: a beat and then from the roots of it, the chords, and the melody. Then I only add in a couple more things because I want to keep it tight and like [that] anxious, buzzing space.

Do you have a favorite song on the record?

I love “Isn't It Lovely” because I think I just really figured it out. Like, that song has so many versions of itself. I was doing very simple four-on-the-floor beats and the chords, and then one day I made this pattern on my 505 that really shifted it and put it in that shuffle groove tempo. I was scared of my idea changing too much, but it was a big trust-the-process moment for me.

Not to like gas myself, but I think I did a good job. To me, it's so beautiful, the harmonies and everything. I think I gave it the perfect hip-hop inspired beat to put it in this multi-genre place of it being happy and sad. Which is always the goal.

Janky Star is out now.