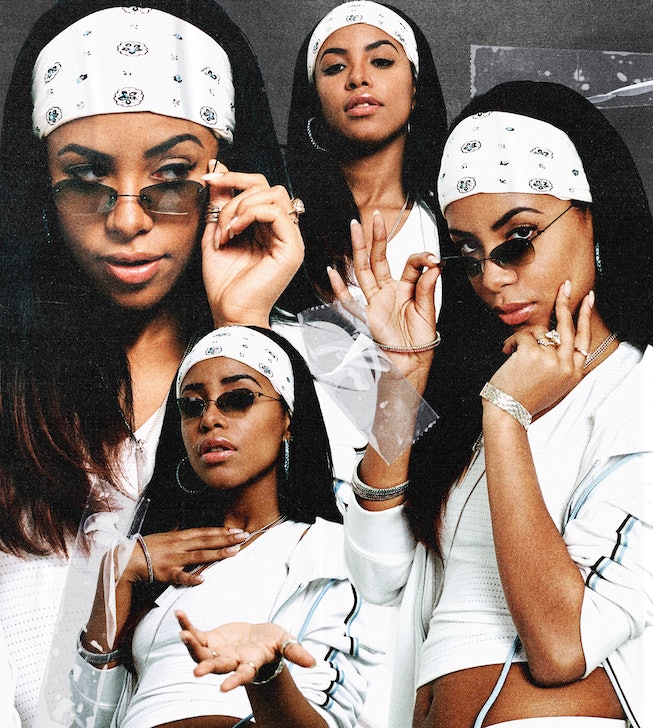 Nearly 20 years after her death, the young R&B prodigy Aaliyah remains nearly as influential now as she was back then in the late ‘90s to ‘00s. Although her full musical discography — three studio albums, and countless radio hits — has never been released onto streaming services before, the late R&B star’s legacy has lived on, very frequently in the songs of others.

From OutKast to Kendrick Lamar and J. Cole to Tamar Braxton, artists and musicians throughout hip-hop and R&B have long pulled inspiration from Aaliyah’s dulcet tones, and the adventurous production work of her songs courtesy of Timbaland and (unfortunately) R. Kelly. Drake’s notorious obsession with the late singer has brought forth several tracks that prominently feature Aaliyah’s voice, from his song “Unforgettable” with Young Jeezy, which opens with her voice, to “Is There More” where she incidentally closes the song.

Now, with the first drop of Aaliyah’s highly-anticipated catalog arriving onto Spotify this Friday, NYLON rounded-up nine of the greatest Aaliyah samples in hip-hop and R&B, with songs from Drake, The Weeknd, Tink, Normani, and more.

Samples: Aaliyah’s “At Your Best (You Are Love)”

“Unforgettable,” off Drake’s debut studio album Thank Me Later, is on the surface a track about dealing with a breakup while simultaneously being on the rise to fame. But the song’s title hints at its deeper meaning, a theme that is embedded throughout Drake’s career: a desire to be legendary, timeless — like a classic R&B song. Sampling Aaliyah’s 1994 rendition of The Isley Brothers’ 1976 “(At Your Best) You Are Love” instantly drives this point home. What’s more unforgettable than one of the most iconic singers of our time?

Samples: Aaliyah’s “At Your Best (You Are Love)”

Aaliyah’s slow and silky ballad “At Your Best (You Are Love)” got a bolt of energy when Tamar Braxton repurposed the song’s beat and Aaliyah’s vocals for a trap-inflected mid-tempo R&B tune with Future. Aaliyah singing, “Let me know,” in an angelic chipmunk pitch quietly echoes in the background throughout the song. Overall, the 2016 track is a tasteful little bop that also hits all the right nostalgia buttons.

The Weeknd’s “What You Need”

“What You Need,” a seductive, hypnotic ballad from The Weeknd’s enigmatic House Of Balloons era, samples Aaliyah’s sensual “Rock The Boat” — a song about her addiction to her lover’s touch. “Boy, you really get me high/I feel like I'm on dope,” Aaliyah sings in the R&B song’s opener; it’s fitting, then, that Abel sampled the song for “What You Need” — a song about his girl being dependent on his love the way one might be on drugs. (While the original version of the song samples Aaliyah’s “Rock The Boat,” it was the only sample not cleared for the repackaging of Abel’s early mixtapes into Trilogy, and the sample was later removed from the track it inspired).

“R.I.P. Aaliyah,” Kendrick sings throughout the chorus of this Section.80 track as a direct tribute to the late singer. In fact, the whole song finds Kendrick paying his respects to fallen hip-hop icons, as it samples Aaliyah’s “4 Page Letter,” the late Pimp C’s verse from Jay-Z’s “Big Pimpin,” and references TLC’s Lisa “Left Eye” Lopes, who died at the age of 30 in a car crash.

“Pink & Blue,” off Outkast’s 2003 double album Speakerboxxx/The Love Below finds Andre 3000 fantasizing about a relationship with an older woman. “Miss Lady, you could have been born a little later—but I don't care/So what if your head sports a couple of grey hairs?” he raps with signature frankness. The track appropriately opens with a sample of Aaliyah’s “Age Ain’t Nothin’ But A Number,” — a flip of its original meaning, which was a reference to then 15-year-old Aaliyah’s relationship with 27-year-old R. Kelly.

Samples: Aaliyah’s “One In A Million”

Of the 21 songs that have borrowed from Aaliyah’s “One In A Million” according to WhoSampled, not many do it better than Tink who raps over a repurposed and revitalized version of the song’s spare and slick beat courtesy of none other than Timbaland himself. Indeed, the producer himself championed Tink as the Next Big Thing, and this track proves that distinction. Even on a direct Aaliyah beat, she stands her own.

One of the more deep-cut samples on this list, J. Cole’s “Best Friend” pulls from Missy Elliott’s and Aaliyah’s song “Best Friends.” It’s also less a sample than a straight up remix, as Cole leaves Elliott and Aaliyah to do their thing on the chorus while he takes over on the verses. In its best moments, it nearly sounds like the rapper is in an active dialogue with the late R&B singer, revealing the time-transcendent power a properly placed sample can have.

Drake, “Is There More”

Samples: Aaliyah’s “More Than A Woman”

On this Scorpion track which concludes Disc 1 of the behemoth project, Drake calls upon a slightly warped version of Aaliyah’s lush vocals from “More Than A Woman” to close out the song. Throughout it, he wonders if there’s more to life than money and success, and if there’s more that he’s missing. The sample cuts in like divine intervention — “Passion, instant/ Sweat beads, feel me,” Aaliyah croons — resulting in a fairly impactful closer for the first part of the record.

Samples: Aaliyah’s “One In A Million”

This one is tricky. Though Aaliyah’s uncle has said Normani’s team didn’t actually get clearance to sample the beat from “One In A Million” — while her team has insisted that the song doesn’t use a direct sample from the track — it does seem that the hit inspired “Wild Side” one way or another. When Timbaland (who produced “One In A Million”) gave his seal of approval by sharing a video of him jamming out to the song, Normani responded, “I must’ve died when I seen this.” The “Motivation” singer has also spoken about the song’s influence in interviews: “The drum pattern, it’s there,” she told Zach Sang.

Regardless. At the very least, “Wild Side” is a very tangible tribute and homage to Aaliyah. Normani demurely raps and sings over the song’s pittering and sharp “One In A Million” drum pattern, bringing out a completely different side to the iconic production. It’s a connection between two R&B prodigies that feels almost cosmic.