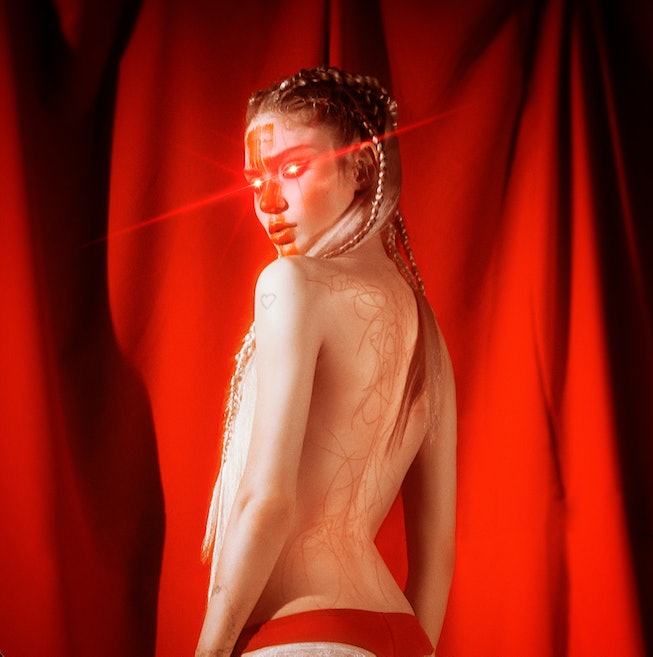 Like all of the avant-pop artist’s most recent releases, “Shinigami Eyes” arrived with a visually rich visual that feels like a cyber-tech hallucination, featuring glowing red eyes, snakeskin-like bodysuits, metallic fallen angels, holographic dancers, and a rainbow-drenched cameo from BLACKPINK’s Jennie. Any loyal Grimes fan knows that she’s nothing if not an expansive world builder with her music, and it wouldn’t be a stretch to wonder how “Shinigami Eyes” fits into the wider narrative of Book 1, her long-teased sixth studio album set to tell the story of a lesbian space opera. But it turns out that there may be less than meets the eye to “Shinigami Eyes” (no pun intended) beyond what floats obviously to the surface through its lyrics and high-budget video.

It’s clear off the bat that “Shinigami Eyes” is a direct reference to the wildly popular Japanese manga and anime Death Note. The 2003 - 2006 manga series written by Tsugumi Ohba follows the story of Light Yagami, a brilliant high school student who one day stumbles upon a supernatural notebook with the ability to kill the person of whoever’s name is written inside its pages. With his discovery, Light also gains the ability to see Shinigamis, a sort of supernatural death angel with eyes that can see the lifespans and names of all humans. (As you can imagine, this ability paired with the notebook is a deadly combination.) In the manga, Light eventually gains his own Shinigami eyes in exchange for half his lifespan.

Rather than using her eyes to track down murderers and wrongdoers — as Light does in Death Note — Grimes instead uses her vision to target the men who’ve betrayed her in the past, as the song’s lyrics continue: “And young men's love doth lie/ Never in their hearts/ Only in their eyes/ And I'm so f*cking high/ Rent free in your head/ Missing from your bed/ I know your secrets/ Everything.”

Knowing all of this, it’s easier to connect its high-octane video to the song’s lyrics and theme, with the appearance of the metallic angels being a stand-in for Shinigamis, and the whiplash set changes and hazy video quality perhaps being Grimes’ interpretation of existing in Death Note’s supernatural plane. But, is there any deeper meaning to the song beyond its connection to Death Note?

According to Grimes, not really. In an interview with Zane Lowe, she admitted that she wrote the song after her long-time collaborator and producer, Illangelo, watched the anime and really liked it.

“Well, actually, okay, so this song, I'm not sure what I should say or not say,” Grimes told Lowe in an interview. “I always say a bunch of stupid s**t and get in trouble, but either way. This is the label executive decision song. I love the record, but it's just like, everyone's like, what's the deeper meaning? And it's like, well, Nino Angelo just really had just watched Death Note and really liked it. Basically, I wrote the whole space opera thing and this is the only song that wasn't this big narrative plot. Anyway, I actually do really like the song. Sorry. I'm just undermining the marketing strategy.”

All that being said, “Shinigami Eyes” is still a spectacular feat of storytelling — if not an example of Grimes’ brilliant ability to metabolize existing literature and art and morph them into her own wacky creations — whether or not there’s deeper meaning to parse in its lyrics. It’s also still a banger of a song, and sometimes that’s all it needs to be.

Read about everything we know about Grimes’ Book 1.