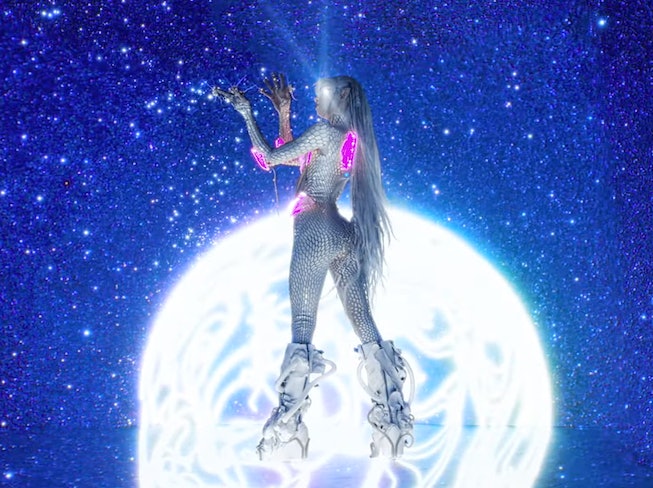 The song’s title is direct nod to the popular magna and anime series Death Note, in which a teenage boy comes into possession of a notebook that previously belonged to a shinigami — a supernatural Japanese spirit that invokes death — allowing him to kill anyone, anywhere as long as he knows the target’s face as he writes down their name. In “Shinigami Eyes,” Grimes inhabits both an enchanting goddess of death with eyes that kill and an AI pop-star touring Rainbow Road in the year 3000. And she looks the part — a skintight suit as delicate as a dragon fly wing, glowing armor, and flanked by BLACKPINK’s Jennie as a kaleidoscope portal.

These costumes are the brainchild of designer Asher Levine, whose work in melding fashion with VR and 3D printing make him a natural collaborator with a fellow visionary like Grimes. Ahead of the release of "Shinigami eyes," Levine spoke to NYLON about how Grimes and Jennie’s looks came to be, digital fashion, and his visions for a democratized future in the industry.

How long was it from the initial conception to being on set for the video?

The great thing is, I was concurrently working on a full scale pattern inspired by dragonfly wings and I was doing it manually; I made the scales manually, like in the Doja one, but manually meaning changing the shape and size of the scales as it goes over the form. You play with the eye through where you place the scales. And so I did that manually, and [stylist] Bret [Alan Nelson] wanted this in, I kid you not, a week.

I was like, this is the perfect time to execute it on. I called my buddies at Nervous System, Jessica and Jessie, they're MIT alumni, and we analyzed the geometry and then I directed into where the scales need to grow and bend, where to put lines and where there's gradation, and then we output this pattern and it's so good. It's a variation of Tetra, and it's a variation of this look, a kind of skin tone dress. It's made of fine cotton. I've made so many scale things that are hard to move, I'm like you know what, I need to make something that is scale and armor-like, but is so comfortable.

You know what Grimes’ outfit looks like? When a bug sheds its exoskeleton ... or like shed skin, both of which I find very cool. A lot of your work kind of just evokes this sort of celestial alien insect sort of feel.

We love exotic skins. There's something that's super appealing when you see fur, or you see croc skin, like the $300,000 Birkins. My whole thing is people want to integrate technology and do cool new things. I mean, honestly, knitwear and the current textiles of knitwear is actually technology of fine knitting machines and machine innovation.

Tetra is a very dragonfly wing-inspired. I picked up a dragonfly wing, this is so many years ago, off of the floor in New York city, on the street. I was walking with a partner and he was an executive at an intelligent microscope company, and everything centers on AI. We looked at this dragonfly wing under an AI microscope; it's called nanotronics, and then it was just so beautiful to analyze this wing that I picked up off the street. These bug geometries stick with me. Speaking of bug geometry, can you believe about Thierry Mugler?

I know. Such a huge loss.

I was at this pool party and I just screamed, gasped out loud. And I was like, "No! F*ck."

It's horrible. Talk about fun fashion, he was so imaginative and futuristic…

He super inspired me. When I was just making things at 19, a total club kid, just like, "Let's do this. Let's do that," I needed to be educated. One of my close friends, Scott Ewalt, he's on The Bowery, he said, "Wait, you're doing that line? Let me show you." And he dated Thierry years ago, and he shows me these similar silhouettes that Thierry Mugler did. And I'm like, "Who is this man?" I mean, I even had this fascination of that kind of filled in nose ridge look. And then I saw that that's what he did. I'm like, "This is tripping me out." So I feel super connected to him as a designer. It's kind of insane.

When you say Tetra, this is the name of the fabric, or the design of the suit?

The species. That's how I've always looked at everything. Each pattern is its own phylogenetic tree, so there's variation. And what I'm working on is, later this year, we're going to have the Tetra available, customizable, to be made on demand for anyone who wants it. I don't know if we're going to be doing a certain minting of a thousand dresses or however many dresses.

I've always been about made-to-measure because I've never really believed in sizing, that's the whole downfall in how unsustainable fashion is. I've been saying this for the past eight years. It's like, “You guys, it's all about body scanning, turning it into pattern-making software, having an interface where the customer can make customizations.” You have quality manufacturing and you can do on demand made-to-measure.

Tell me more about this.

Pre-pandemic, no one was open to this new type of infrastructure, but obviously post-pandemic, everyone is. And so, I've been a thought leader in that space. I've created all these technology relationships and partners to where we get your body measurements, the style is created you can customize it. So Tetra will be available. You can customize the color. And I'm also developing features to where it matches your skin tone. The vision for that dress is that there's three main tones, and so we're working on how we do that, but then it would be made to your body and shipped to you. then what I want to do quickly after the release is also get some digital fashion out there. Digital fashion is a whole other pipeline of creation.

Sexy! Are you talking about getting digital fashion in the NFT space, or creating clothes in Unity and selling them for video games?

All of that. It's about how you showcase the item. I'm experimenting with how you can imbue physical objects with digital features. What's interesting is my brand is kind of a bridge between digital and tangible. I like to make my tangible things look like they're CGI.

You just said imbuing the physical with the digital, and is that kind of the glowing armor orbs that Grimes wears in the music video? Is that what you're talking about?

Exactly. I built that in VR, then made the geometry, and then did various 3D printing, and then molding, and then forming, and then cutting. It's all that scanning and all those tools, they're all tools, right? But now I already have the digital files and my main sculpting guide because I have a sculpture studio. In my studio, there's all these different departments, like fashion, sculpture, tech, and now there's a whole other kind of digital, and they all have their own special things.

I love armor. Armor is so cool. At the end of the day we're just wearing shapes. I could wear a pink dress down the road and we would have emotional responses to it. It's like we have emotional responses to shapes, and lines, and then the meaning that we ascribe to them. Things deal with sex and power, and we're sexual preachers and armor is very sexy because it's very protective. It's soldier. And it's fun when you have to tie something so armor-like, because it's also how you diffuse light. People put light in clothes and it's like. “I don't want to see a dot, I want it to be alive.” The light's going to be super alive. It's going to be pulsing. Technology should be living, not something hard.

I was reading a fast company piece about you, about how the a team from the government was interested in your MoMA jacket, because they wanted to find out a way to incorporate lights for their fighter pilot uniforms, which is so wild.

There's so much. I'm doing the digital fashion over here. I'm like, "Damn. I need an agent to just contact them." I mean, that could be a $5 million contract, at least.

What's your vision of technology and clothing? You want it to be “alive,” so how do you envision that for the everyday person?

Something that's intuitive and utilitarian. That's why I see it on motorcycle jackets, and also how it can just be subtle, how light can be subtle. Thinking of where light can be utilitarian, right now I'm more exploring the full spectrum, take it to the next. I love making gorgeous, chic, minimal, kind of tattered, sophisticated grunge, clean. I like that. Like something that you can comfortably wear to the office and it's all knitwear wear, but the lines look like it's almost like a jacket, soft tailored.

My strategy has really been to just wow people with things that are like "What is 21st century fashion and what does it look like?" And I'm like a quasi-tech company. I've been working on filing IP in illuminated accessories, in special three dimensional leather, and working on forging those large scale partnerships because I really feel like in the future, brands, everything, will take on a different meaning. Everything will be democratized, so there will be so many designers. I can help be that platform for future people to make wild creations. I'd love to do a collaboration with a big brand and do the sickest accessory, so that's kind of where I see it.

In recent years, you’ve worked with Doja Cat, Lil Nas X, and now Grimes. Those are the most exciting people in music right now. They're the ones who really like doing their thing and like pushing it forward.

I love that. I love that when it's synchronized, and there's different aesthetics. I like the future aesthetic, and exploring that. I think it's cool to work with celebrities and stuff. It's like we can steer it so that it's fashion-focused with the validation of celebrity.

Tell me about Jennie’s look. What was the experience creating it?

It's the full spectrum of color. I was like, "Brett, you want this in a week?" Like, honey. It was just nuts. And so you're in the moment and you're just like, boom, boom, boom, boom, boom. I'm like, "Oh, she's going to want it in the whole video? Well, you're going to want to have duplicates.” Because that's what you do when you need it in the whole video. Things move and a lot of the stuff is delicate. That's why when they did Batman, they had, like, 42 Catwoman suits made. They were supposed to start the dancing in the last one, and then it's like, boom, dancing's the first one. I'm all stressed out, trying to resolder all this stuff. I make it work. But then I get to see when they were both on screen and then all that stress just went away and I was like, "Wow."

You lived through it.

Lived through it. And it was just the power of the scene together. It was really cool.